Pope encourages people to rediscover the need for prayer 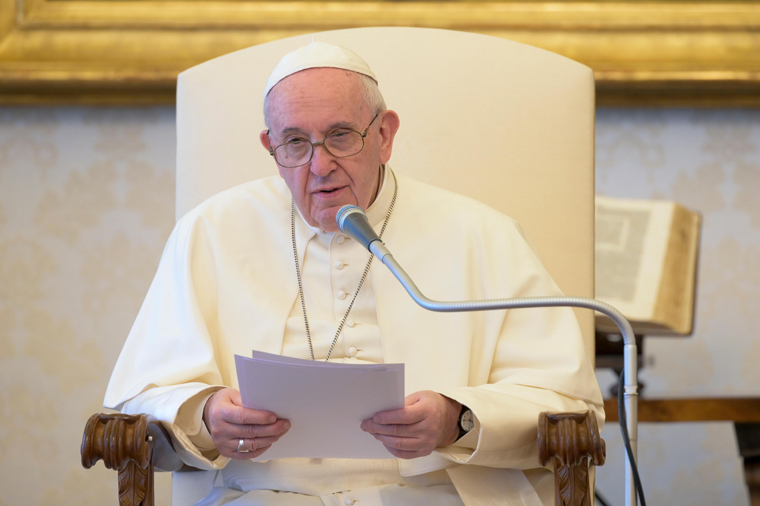 VATICAN CITY (CNS) –– The coronavirus pandemic is a “favorable time to rediscover the need for prayer in our lives; let us open the doors of our hearts to the love of God our father, who will listen to us,” Pope Francis said.

At his weekly general audience May 6, the pope began a new series of audience talks about prayer, which is “the breath of faith, its most appropriate expression, like a cry arising from the heart.”

At the end of the audience, which was livestreamed from the papal library in the Apostolic Palace, the pope offered a special prayer and appeal for justice for “exploited workers,” especially farmworkers.

Pope Francis said that May 1, International Workers’ Day, he received many messages about problems in the world of work. “I was particularly struck by that of the farmworkers, among them many migrants, who work in the Italian countryside. Unfortunately, many are very harshly exploited.”

An Italian government proposal to grant work permits to immigrant workers in the country without proper papers has shined a spotlight particularly on farmworkers and their long hours, poor pay and miserable living conditions while also highlighting their essential role in ensuring an adequate supply of fresh fruit and vegetables for the country.

“It is true that the current crisis affects everyone, but people’s dignity must always be respected,” the pope said. “That is why I add my voice to the appeal of these workers and of all exploited workers. May the crisis give us the opportunity to make the dignity of the person and the dignity of work the center of our concern.”

The pope’s audience began with reading the story from the Gospel of Mark about Bartimaeus, the blind man, who repeatedly cries out to Jesus for healing. The pope said that of all the Gospel characters who ask Jesus for help, he finds Bartimaeus “the most likable of all.”

“At the top of his voice,” Bartimaeus cries out, “Jesus, son of David, have pity on me.” And he does so over and over again, annoying the people around him, the pope noted.

“Jesus speaks to him and asks him to express what he wants — this is important — and so his cry becomes a request, ‘I want to see,'” the pope said.

Faith, he said, “is having two hands raised (and) a voice that cries out to implore the gift of salvation.”

Humility, as the Catechism of the Catholic Church says, is essential for authentic prayer, the pope added, because prayer arises from knowing “our state of precariousness, our continual thirst for God.”

“Faith is a cry,” he said, while “nonfaith is suffocating that cry, a kind of ‘omerta,'” he said, using the word for the mafia code of silence.

“Faith is protesting against a painful situation we do not understand,” he said, while “nonfaith is limiting ourselves to enduring a situation we have become accustomed to. Faith is the hope of being saved; nonfaith is getting used to the evil that opprsses us.”

Obviously, the pope said, Christians are not the only ones who pray because every man and woman has within themselves the desire for mercy and aid.

“As we continue on our pilgrimage of faith, may we, like Bartimaeus, always persevere in prayer, especially in our darkest moments, and ask the Lord with confidence: ‘Jesus have mercy on me. Jesus, have mercy on us!'”