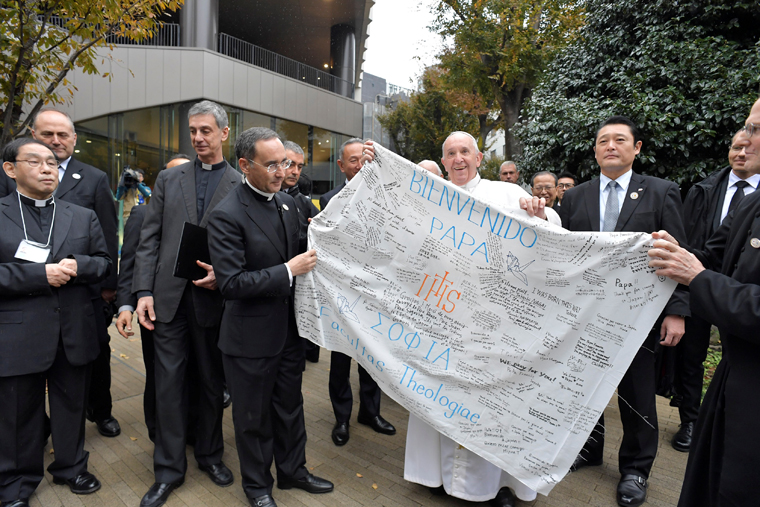 TOKYO (CNS) — Pope Francis spent his last morning in Japan at the Jesuit-run Sophia University, celebrating Mass with his Jesuit confreres, visiting aged members of the Jesuit community and addressing students and staff.

Once again he invoked the spirit of St. Francis Xavier, the famed 16th-century missionary to Japan, and the spark of his own, never-realized desire as a young Jesuit to be sent as a missionary to the Land of the Rising Sun.

In his speech to students and staff Nov. 26, he focused on the meaning of a Catholic university education, especially in a fast-paced, prosperous society.

“For all the efficiency and order that mark Japanese society,” he said, “I have sensed a yearning, too, for something greater: a profound desire to create an ever more humane, compassionate and merciful society.”

Sophia University can help provide a response, he said, by ensuring professors and students seek “sophia,” the Greek word for wisdom.

“In a society as competitive and technologically oriented as present-day Japan,” the pope said, that search for wisdom must include finding ways to put new technological advances “at the service of a more humane, just and ecologically responsible education.”

As a Jesuit school, built on the spiritual tradition of St. Ignatius of Loyola, the university also “ought to inspire professors and students alike to create an atmosphere that fosters reflection and discernment,” Pope Francis said.

“No student of your university should graduate without having learned how to choose, responsibly and freely, what he or she knows in conscience is best,” he said. “In every situation, even the most complex, may they be concerned that their conduct is just and humane, conscientious and responsible, and show themselves resolute defenders of the vulnerable.”

“The Lord and his church are counting on you to share in the mission of seeking, finding and spreading divine wisdom,” the pope told the university community. Fulfilling that call will offer joy and hope to Japanese society.