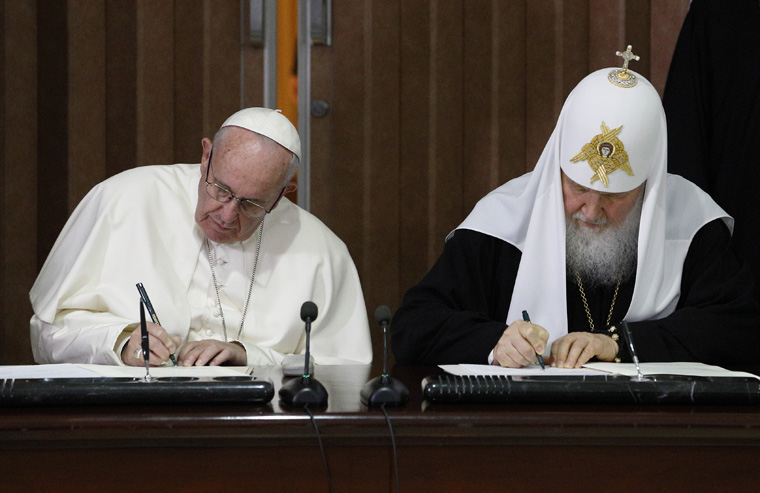 ABOARD THE PAPAL FLIGHT FROM HAVANA (CNS) — Though their differences are recognizable and real, Pope Francis and Russian Orthodox Patriarch Kirill of Moscow emphasized their obligation as Christians and as bishops to encourage collaboration among Christians and charity for all who suffer.

“I felt an interior joy that truly came from the Lord,” the pope told reporters traveling with him Feb. 12 as he flew to Mexico from Havana, where he met the patriarch. The Vatican had told reporters on the plane that the pope would not be speaking to them after the meeting, but the pope said he wanted to share what he was feeling.

“It was a conversation of brothers,” Pope Francis said. The conversation was marked by freedom and “complete frankness,” he said.

Cardinal Kurt Koch, president of the Pontifical Council for Promoting Christian Unity, and Metropolitan Hilarion of Volokolamsk, director of foreign relations for the Moscow Patriarchate, were present for the meeting, along with two translators, the pope said.

Together, they discussed concrete proposals for working together, “because unity is made by walking,” the pope said. Even if the goal of full unity is not reached in this lifetime, he said, “at least when the Lord comes, he’ll find us walking.”

Pope Francis said the joint statement he and Patriarch Kirill signed in the presence of Cuban President Raul Castro “is not a political statement, it’s not a sociological statement; it is a pastoral declaration.”

While the two leaders insisted on the need to stop the persecution of Christians in the Middle East and North Africa and condemned abortion and euthanasia, they used much more careful language to discuss two issues that made their meeting so surprising: the life of the Ukrainian Catholic Church and the war in Eastern Ukraine.

For more than 25 years, Russian Orthodox patriarchs have refused to meet a pope because of what the Moscow Patriarchate claims is “proselytism” on the part of Ukrainian Catholics, one of the Eastern churches in full union with Rome. The church was outlawed under the Soviet Union and its rebirth with Ukrainian independence has meant a loss of both buildings and faithful for the Russian Orthodox.

In their statement, Pope Francis and Patriarch Kirill said all Christians — Catholic or Orthodox — are called to preach the Gospel. “This mission entails mutual respect for members of the Christian communities and excludes any form of proselytism.”

“We are not competitors but brothers, and this concept must guide all our mutual actions as well as those directed to the outside world,” the two said.

Without providing specific examples or any clarification, the statement denounced “disloyal means” used “to entice believers to pass from one church to another.”

The pope and patriarch said they hoped their meeting would “contribute to reconciliation” wherever there is tension between Orthodox and Eastern-rite Catholics, who share the same spiritual and liturgical heritage.

Using language similar to that found in a 1993 document of the international Roman Catholic-Orthodox theological dialogue, the two leaders said “uniatism” — incorporating one portion of a church into another — “is not the way to re-establish unity.”

However, the two leaders, like the 1993 document, acknowledged that “the ecclesial communities which emerged in these historical circumstances have the right to exist” and to do what is necessary to minister to their faith.

As for the Russian-supported war in Eastern Ukraine, Pope Francis and Patriarch Kirill said, “We deplore the hostility in Ukraine that has already caused many victims, inflicted innumerable wounds on peaceful inhabitants and thrown society into a deep economic and humanitarian crisis.”

They called on their churches “to refrain from taking part in the confrontation and to not support any further development of the conflict.”