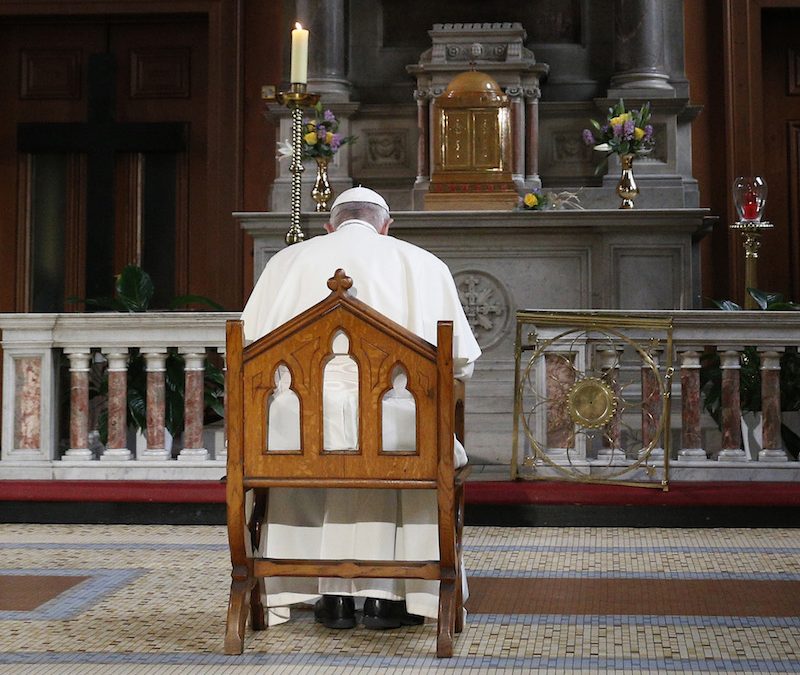 Pope Francis prays in front of a candle in memory of victims of sexual abuse as he visits St. Mary’s Pro-Cathedral in Dublin Aug. 25, 2018. Pope Francis has revised and clarified norms and procedures for holding bishops and religious superiors accountable in protecting minors as well as in protecting members of religious orders and seminarians from abuse. (CNS photo | Paul Haring)

VATICAN CITY (CNS) — Pope Francis has revised and clarified norms and procedures for holding bishops and religious superiors accountable in protecting minors as well as in protecting members of religious orders and seminarians from abuse.

The new juridical instrument is meant to help bishops and religious leaders around the world clearly understand their duties and church law, underlining how they are ultimately responsible for proper governance and protecting those entrusted to their care. For this reason, the new document establishes a clearer set of universal procedures for reporting suspected abuse, carrying out initial investigations and protecting victims and whistleblowers.

The new document, given “motu proprio,” on the pope’s own initiative, was titled “Vos estis lux mundi” (“You are the light of the world”), based on a verse from the Gospel of St. Matthew (5:14).

“The crimes of sexual abuse offend Our Lord, cause physical, psychological and spiritual damage to the victims and harm the community of the faithful,” the pope said in the document, released by the Vatican May 9. The norms go into effect June 1.

In order to stop all forms of abuse from ever happening again, not only is “a continuous and profound conversion of hearts” necessary, there must be “concrete and effective actions that involve everyone in the church,” he wrote.

Cardinal Marc Ouellet, prefect of the Congregation for Bishops, said the new norms ascribe a new role to heads of dioceses by making them responsible for alerting the proper Vatican authorities of all forms of suspected abuse, including the possession, distribution, or creation of pornography involving a minor.

He told Vatican News May 9 that the norms respond to Pope Francis’ continued insistence for concrete and effective measures to ensure bishops and religious superiors have a very clear understanding of what their obligations are and what they should and should not do when it comes to safeguarding.

It also requires all priests and religious to report suspected abuse or cover-ups and encourages any lay person to report through a now-mandated reporting “system” or office in each diocese.

How the office or “system” works will be up to each diocese, but “the idea is that anyone who has suffered abuse can have recourse to the local church, while being assured they will be well received, protected from retaliation, and that their reports will be treated with the utmost seriousness,” Andrea Tornielli, editorial director of the Dicastery for Communication, told Vatican News.

• Procedures for the investigation of bishops, cardinals, patriarchs, religious superiors, and all those who lead — even temporarily — a diocese or particular church, including personal prelatures and personal ordinariates.

• Leaders will be held accountable not only with suspected cases of committing abuse themselves, but also accusations of having interfered with, covered up, or failed to address abuse accusations they were aware of.

• When the accused individual is a bishop, the metropolitan will receive a mandate from the Holy See to investigate or delegate a person in charge of the preliminary investigation. A status report must be sent to the Holy See every 30 days, and the investigation completed with 90 days with some exceptions. Vatican offices are also held to specific timeframes and prompt action.

• By June 2020, every diocese in the world must create an office or “public, stable and easily accessible systems” for reporting suspected abuse against a minor or vulnerable person, failure of compliance of abuse guidelines by bishops or superiors, and cases of interference or cover-ups in either a civil or canonical investigation of suspected abuse.

• All priests and religious that become aware of abuse or its cover-up must alert their bishop or religious superior promptly.

• A minor is anyone under the age of 18 and a vulnerable person is “any person in a state of infirmity, physical or mental deficiency, or deprivation of personal liberty which, in fact, even occasionally, limits their ability to understand or to want to otherwise resist the offense.”

• Bishops and religious superiors will be accountable not just for protecting minors against abuse but also for protecting seminarians, novices, and members of religious orders from violence and sexual abuse stemming from an abuse of power. The norms apply to reports of “delicts against the sixth commandment” regarding clerics or members of religious orders and “forcing someone, by violence or threat or through abuse of authority, to perform or submit to sexual acts.”

• Those who report abuse cannot be subjected to pressure, retaliation, and discrimination or told to keep silent. The seal of confession, however, remains inviolable and is not affected by the new norms.

• Procedures for carrying out the preliminary investigation include the bishop immediately requesting from the Vatican that he or a delegate be assigned to begin the preliminary investigation. If he considers an accusation is unfounded, the papal nuncio is informed. The Vatican will have 30 days to respond to the request and the bishop sends a status report to the Vatican every 30 days.

• When the investigation is complete, the bishop sends the results to the proper Vatican office, which then follows existing canon law.

• The continued obligation to respect civil laws regarding mandatory reporting.

• Those who reported suspected abuse or cover-up will be told of the outcome of the investigation if they request to be informed.

• A fund can be set up by bishops’ conferences, synods, and church provinces to cover the costs of investigations.

The document is a follow-up to Pope Francis’ 2016 document, “As a Loving Mother,” on transparency and accountability of bishops and religious superiors.

The two documents together are meant to correct what had been a lack of or unclear procedures for investigating the way a bishop complies with already established norms against abuse and clearly expressing the consequences of noncompliance or cover-ups.