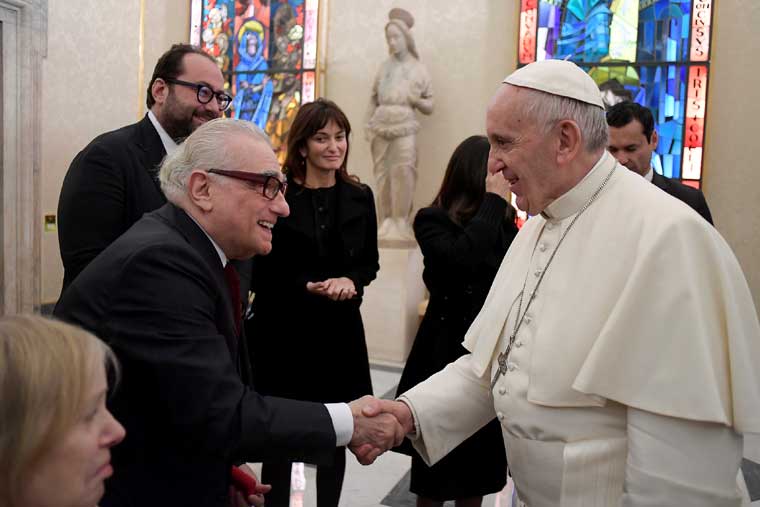 VATICAN CITY — The morning after screening his film “Silence” for about 300 Jesuits, U.S. director Martin Scorsese had a private audience with Pope Francis.

During the 15-minute audience Nov. 30, Pope Francis told Scorsese that he had read Japanese author Shusaku Endo’s historical novel “Silence,” which inspired the film. The book and film are a fictionalized account of the persecution of Christians in 17th-century Japan; the central figures are Jesuit missionaries.

Pope Francis spoke to Scorsese, his wife, and two daughters, and the film’s producer about the early Jesuit missions to Japan and about Nagasaki’s Twenty-Six Martyrs Museum and Monument, which honors the Japanese martyrs executed on the site in 1597.

Scorsese gave the pope two paintings, which the Vatican said were “connected to the theme of the ‘hidden Christians,’” the Christians who kept their faith secret during the persecution. One of the paintings was of an image of Mary venerated in the 1700s.

The U.S. director screened the film Nov. 29 at the Jesuit-run Pontifical Oriental Institute in Rome for an international group of Jesuits and Nov. 30 in the Vatican for specially invited guests.

In an interview taped after he met the pope, Scorsese said the pope had told him that he hopes the film “bears fruit.”

Scorsese said an Episcopalian bishop gave him Endo’s novel in 1988 and, immediately after reading it, he wanted to make a film of it, but it took 28 years to understand the story, to figure out how to tell it, and to get the funding and cast and crew together. “It was like a pilgrimage,” Scorsese told TV2000, the television channel of the Italian bishops’ conference.

All that time getting everything together, he said, means the film — set for a Dec. 23 release in the United States — is coming out at a time when religious freedom and religious intolerance are not just of historical interest, but are in the news today. “It wasn’t such a big topic when I began” more than two decades ago, Scorsese said.

In the novel, Jesuit priest and missionary Father Rodrigues is captured; to make him renounce the faith, the Japanese authorities force him to watch as local Christians are martyred. While he believes he would suffer for his faith, he has a difficult time refusing to publicly renounce Christianity when it would end the suffering of the others.

In the end, Scorsese told TV2000, Father Rodrigues “understands Christ, he understands the love of Christ and they can’t take that away from him. Everything else is stripped away but that.” He publicly recants.

“On the surface,” Scorsese said, the book’s title “refers to the silence of God,” though Father Rodrigues learns that “God is in the silence, that God has been there suffering with him.”