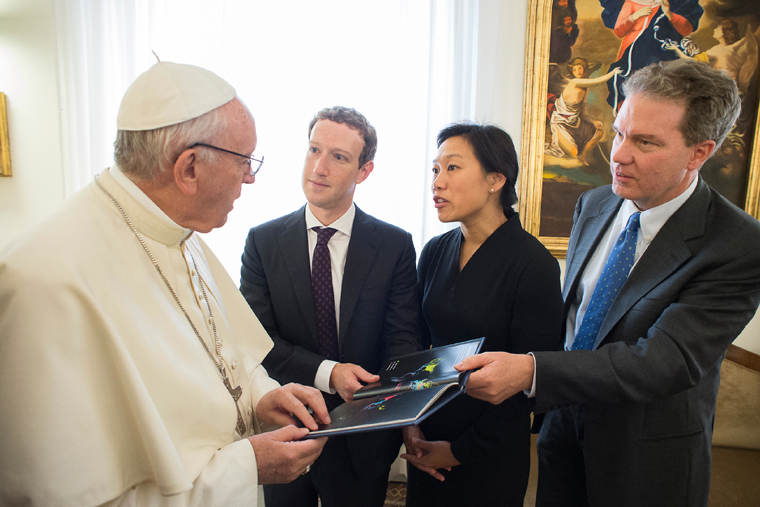 VATICAN CITY (CNS) — Continuing his dialogue with leaders in the world of social media and technology, Pope Francis met with Facebook founder and CEO Mark Zuckerberg.

Zuckerberg and his wife, Priscilla Chan, met the pope Aug. 29 in the Domus Sanctae Marthae, where the pope lives.

“It is an honor to be with you today,” Zuckerberg told the pope, adding that he hoped to help spread the pope’s “message of mercy and tenderness.”

He also presented Pope Francis with a model replica of Aquila, a solar-powered aircraft that will beam internet connectivity to areas with limited or no connection.

Greg Burke, Vatican spokesman, said the pope and Zuckerberg spoke about “how communications technology can be used to alleviate poverty, encourage a culture of encounter and help deliver a message of hope, especially to the most disadvantaged people.”

Pope Francis presented Zuckerberg and his wife with a copy of “The Name of God is Mercy,” a book-length interview he did with Italian journalist Andrea Tornielli. In the book, he told them, “are my thoughts on tenderness and mercy.”

In a message posted on his personal Facebook page, Zuckerberg expressed his admiration for the pope and “how he’s found new ways to communicate with people of every faith around the world.”

“It was a meeting we’ll never forget. You can feel his warmth and kindness, and how deeply he cares about helping people,” Zuckerberg wrote.

Throughout his papacy, the pope has highlighted the importance of social networks as a means to “facilitate relationships” while warning of their ability to “lead to further polarization and division” if used incorrectly.

“The digital world is a public square, a meeting place where we can either encourage or demean one another, engage in a meaningful discussion or unfair attacks,” the pope wrote Jan. 24 in his message marking the 50th World Communications Day.

Earlier this year, the pope met with several notable tech giants in the world of mobile communications, including Google’s Eric Schmidt and Apple CEO Tim Cook.

He also met with Kevin Systrom, CEO and co-founder of Instagram, two weeks before the Vatican launched the pope’s Instagram account, “Franciscus.” Upon its launch, the account broke a record by gaining over 1 million followers in 12 hours.

Twiplomacy, a study of the Twitter accounts of world leaders and their retweet rates, declared the pope “by far the most influential” world leader on Twitter.