Pope ‘most fearless man I ever met,’ says filmmaker Wenders 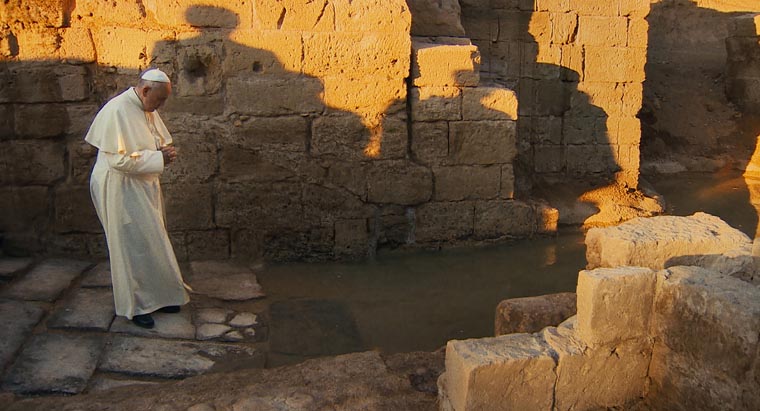 WASHINGTON (CNS) — Pope Francis, the subject of a new documentary by German filmmaker Wim Wenders, is “the most fearless man I ever met,” the director said in a segment of the CBS newsmagazine “60 Minutes” that aired May 13.

“Fearless?” asked “60 Minutes” correspondent Jon Wertheim. Wenders replied, “Fearless. And he is not influenced by polls or whatever. I don’t think he would ever consider any public opinion over something he means and he’s convinced of. He’s totally fearless. Because he has a lot of opposition.”

The “60 Minutes” segment included excerpts from Wenders’ new movie, “Pope Francis: A Man of His Word,” which made its world premiere May 13 at the Cannes Film Festival in France. It is being released May 18 in the United States.

In one excerpt from the film, Pope Francis comments on the rush of everyday life.

“We live with the accelerator down from morning to night,” the pope declares in Spanish, with English subtitles. “This ruins mental health, spiritual health and physical health. More so: It affects and destroys the family. And therefore society.”

Pope Francis quotes from Genesis to buttress his case: “‘On the seventh, day, he (God) rested.’ What the Jews followed and still observe, was to consider the Sabbath as holy. On Saturday you rest. One day of the week, that’s the least! Out of gratitude, to worship God, to spend time with the family, to play, to do all these things.”

The pope concludes: “We are not machines!”

It appears as if Pope Francis is talking to viewers directly into the camera. This is courtesy of the Interrotron, a device invented by U.S. documentarian Errol Morris for some of his works. The “60 Minutes” segment demonstrates how it works: The interviewer’s face — in this case, Wenders himself — is superimposed over the camera lens, and the pope is responding to his questions.

The film notes said Wenders had submitted 50 questions in advance for Pope Francis to consider answering during four interviews that took place over the course of two years.

Asked by Wertheim if the pope realized “how intimate this was going to look,” Wenders replied, “Oh, yes. He understood this whole system really well, and stuck to it, and did it perfectly.”

Although Wenders was commissioned by the Vatican to make the film, and had “carte blanche” without Vatican interference in the finished product, “I don’t think anybody knew” he was making the documentary, he told “60 Minutes,” according to a transcript of the segment supplied by CBS. “We shot under the radar.”

The commission was “more intimidating than flattering,” Wenders said. “I’m not interested in a biography of the man. He’s too interesting for that. I really want the film to be about what he stands for. And that he can only represent himself. So I really wanna make a film with him. I realize it was gonna be one of a kind. But also, sleepless nights.”

Wenders, who narrates “Pope Francis: A Man of His Word,” notes he is the first pope to take the name Francis. “St. Francis stands for a lot,” he told “60 Minutes.” “He stands for quite a radical solidarity with the poor. He stands for a whole new relation to nature. So to take this name was daring.”

Pope Francis also has had to confront the continuing revelations of clergy sex abuse worldwide, which brought out a “really very strong” anger, Wenders said. “That was (after) my question about pedophilia and there he got so worked up. And there was a very angry man speaking into the camera.”

In the film, the pope says, “Towards pedophilia, zero tolerance! And the church must punish such priests who have that problem, and bishops must remove from their priestly functions anyone with that disease, that tendency to pedophilia, and that includes to support the legal action by the parents before the civil courts.

There is no other way out of this! Zero tolerance, because it’s a crime, no, worse! It’s leaving them alive, but destroyed.”

Later on, Pope Francis says, “If you ask me why children suffer, the only thing I can say is: ‘Look at the child of God on a cross.’ I don’t know what other answer to give you. But let’s talk about why God allows it, which is the core of the question. Quite simply, because he created us as persons, and as such: free! God is respectful of freedom. He allowed his son to be killed on the cross. The game of human freedom: God risked a lot here! It would more dishonor man, if God could take away his freedom, than if man, with his freedom, committed a crime.”

Wenders, whose films include “Buena Vista Social Club,” “Paris, Texas,” “Wings of Desire” and U2 concert films and videos, added: “He didn’t want to have anybody else” accompany him during the interviews. “There was no wardrobe, there was no makeup, no props. He came, and we started shooting.”

Realizing that, over the course of the four interviews, Wenders still needed “a moment that will close the movie,” Pope Francis came up with one.

“If you ask me: ‘Give me an example of beauty, simple everyday beauty, with which we can help others feel better and be happier,’ two things come to my mind. A smile and a sense of humor,” Pope Francis said.

“Here I make a personal confession. Every day, after my morning prayer, I recite St. Thomas More. His ‘Prayer for Good Humor,'” the pope added. “It starts in a way that makes you laugh. ‘Give me, oh Lord, a good digestion, but also something to digest.’ That’s it.”