Pope prays for dialogue as tensions mount between U.S., Iran 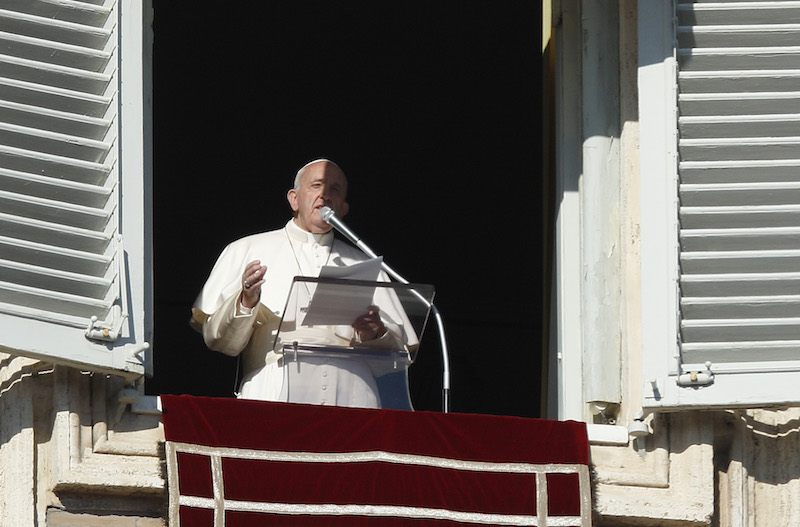 Pope Francis leads the Angelus from the window of his studio overlooking St. Peter’s Square at the Vatican Jan. 1, 2020. (CNS photo | Paul Haring)

VATICAN CITY (CNS) — Pope Francis led pilgrims in prayers for peace as tensions between the United States and Iran escalated following the assassination of a top Iranian general.

Several days after Ayatollah Ali Hosseini Khamenei, Iran’s supreme leader, warned of “harsh retaliation” for the Jan. 3 U.S. drone attack that killed General Qassem Soleimani, the pope said that “a terrible air of tension is felt in many parts of the world.”

“War only brings death and destruction. I call on all parties to keep alive the flame of dialogue and self-control and avoid the shadow of enmity,” the pope said after praying the Angelus prayer with pilgrims gathered in St. Peter’s Square Jan. 5.

He then led the pilgrims in a moment of silent prayer so “that the Lord may give us the grace” of peace.

The drone strike, which killed Soleimani and six other people, including an Iraqi militia commander, caused a sharp escalation in already tense relations after President Donald Trump pulled out of nuclear deal with Iran last year.

In an interview with CNN, U.S. Secretary of State Mike Pompeo defended Trump’s decision and said that Soleimani “was actively plotting in the region to take actions, the big action as he described it, that would have put dozens if not hundreds of American lives at risk. We know it was imminent.”

Shortly after the Iranian general’s death, the United States deployed an additional 3,000 troops to the Middle East to stave off any retaliatory attacks against forces in the region.

However, the attack was seen by world leaders as an unnecessary provocation that could further destabilize the Middle East.

Speaking to Vatican News Jan. 3, Archbishop Leo Boccardi, apostolic nuncio to Iran, said the assassination “creates apprehension and shows us how difficult it is to build and believe in peace.”

“The appeal is to lower tension, to call everyone to negotiation and to believe in dialogue knowing that, has history has always shown us, that war and weapons aren’t the solution to the problems afflicting the world today,” Archbishop Boccardi said.