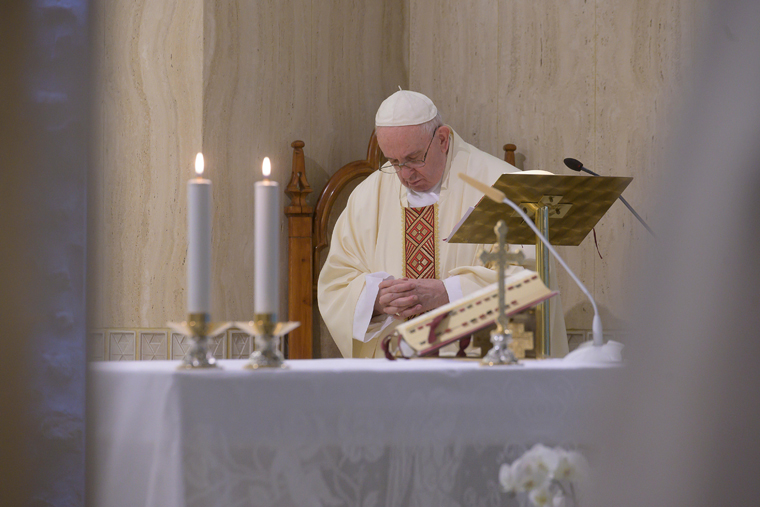 VATICAN CITY (CNS) — Pope Francis offered his early morning Mass for journalists and members of the media who, despite the risks, work tirelessly to inform the public of the ongoing pandemic.

“Let us pray today for the men and women who work in the communications media,” the pope said May 6 at the start of his livestreamed Mass in the chapel of his residence, the Domus Sanctae Marthae.

“In this time of pandemic, they take many risks and there is much work. May the Lord help them in their work of always transmitting the truth,” he said.

In his homily, the pope reflected on the day’s Gospel reading from St. John, in which Jesus proclaims that “whoever believes in me believes not only in me, but also in the one who sent me.”

“I came into the world as light, so that everyone who believes in me might not remain in darkness,” Jesus said.

In presenting himself as the light, the pope explained, Jesus also promises to illuminate peoples’ lives through his word, which the apostles are called to proclaim throughout the world.

Pope Francis said that St. Paul had this experience of passing from darkness to light after he was blinded when Jesus appeared to him on the road to Damascus.

“It is also our journey, which we sacramentally received in baptism,” the pope said. “That is why, in the first centuries, baptism was called ‘The Illumination’ because it gave you light,” he said. “That is why in the baptism ceremony, we give a lit candle to the father and mother, so that the little boy or girl is illuminated. Jesus brings the light.”

Nevertheless, there are sins that blind men and women to the light of Christ and “sicken the eyes of faith,” including vices, pride and a worldly spirit that lead one to “hide behind others to remain safe in darkness.”

The light of Jesus can be uncomfortable at times, he said, because it “makes us see so many ugly things inside us that we don’t want to see.”