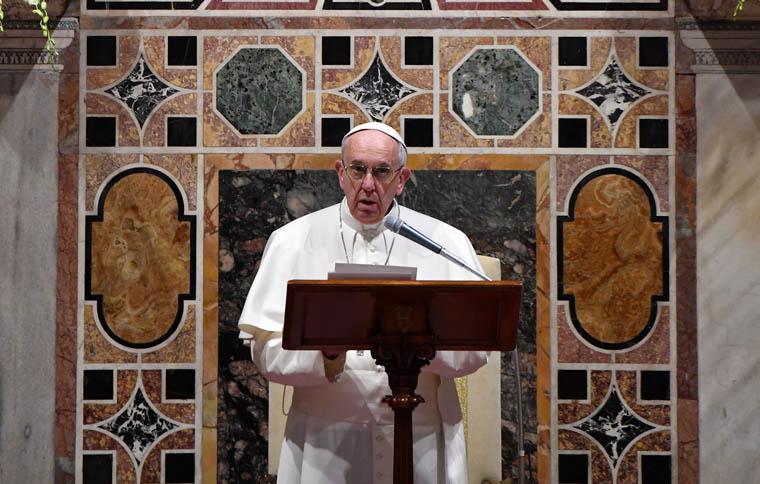 VATICAN CITY (CNS)  — At the start of a new year, Pope Francis laid out a laundry list of suggested resolutions for religious and political leaders for making a joint commitment toward building peace.

No conflict exists that is “a habit impossible to break,” the pope said, but he underlined that kicking such a habit requires greater efforts to rectify social injustice, protect religious freedom, jump-start peace talks, end the arms trade, and cooperate in responding to climate change and the immigration and refugee crises.

In a 45-minute speech Jan. 9 to diplomats accredited to the Vatican, the pope underlined what he saw as the real “enemies of peace” and the best responses that could be made by today’s religious and political leaders.

“One enemy of peace,” he said, is seeing the human person as a means to an end, which “opens the way to the spread of injustice, social inequality and corruption.”

The waste, “greedy exploitation” and inequitable distribution of the world’s resources provoke conflict, he said, and human trafficking, especially the abuse and exploitation of children, cannot be overlooked.

Another enemy of peace, the pope said, are ideologies that exploit “social unrest in order to foment contempt and hate” and target others as enemies to be eliminated.

“Under the guise of promising great benefits, [such ideologies] instead leave a trail of poverty, division, social tensions, suffering and, not infrequently, death,” he said.

What peace requires, he said, is “a vision of human beings capable of promoting an integral development respectful of their transcendent dignity” as well as the courage and commitment to seek to build peace together every day.

Religions are “called to promote peace,” he said, appealing to “all religious authorities to join in reaffirming unequivocally that one can never kill in God’s name.”

“The fundamentalist-inspired terrorism” that has been killing so many innocent people the past year is “a homicidal madness which misuses God’s name in order to disseminate death in a play for domination and power.”

Fundamentalist terrorism is the fruit of deep “spiritual poverty” that does not connect a pious fear of God with the mandate to love one’s neighbor. Often it also is linked to deep social poverty, which demands action including on the part of government leaders.

Political leaders must guarantee “in the public forum the right to religious freedom” and recognize the positive contribution religious values make in society, he said. They must promote social policies aimed at fighting poverty and promoting the family as well as invest heavily in education and culture so as to eliminate the sort of “terrain” that spreads fundamentalism.

Christians, whose divisions “have endured too long,” also must heal past wounds and journey forward together with common goals since many of those conflicts have threatened social harmony and peace, the pope said.

Peace, he said, entails greater justice and mercy in the world, especially toward foreigners, migrants, and refugees.

“A common commitment is needed, one focused on offering them a dignified welcome,” he said. It means recognizing people have a right to emigrate and take up a new residence without feeling their security and cultural identity are being threatened. Immigrants, however, also must respect local laws and cultures, he added.

Handling today’s waves of migration demands global responsibility and cooperation so that the “burden of humanitarian assistance” is not left to just a few nations at enormous cost and hardship.

Peace also demands an end to the “deplorable arms trade” and a ban on nuclear weapons, he said. Easy access to firearms “not only aggravates various conflicts, but also generates a widespread sense of insecurity and fear.”

He called on the world community to do everything to encourage “serious negotiations” for an end to the war in Syria, the protection of civilians, and delivery of the aid needed to address the “genuine human catastrophe” unfolding there.

He urgently appealed for the resumption of dialogue between Israelis and Palestinians in order to guarantee “the peaceful coexistence of two states within internationally recognized borders.”

“No conflict can become a habit impossible to break,” he said, underlining the urgent need for peace in the whole Middle East.

The pope praised the Church’s efforts — inspired by “mercy and solidarity” — to avert conflict through negotiated solutions. He thanked the many individuals who followed this path of actively working for peace, resulting in the rapprochement between Cuba and the United States, and the end to conflict in Colombia.

Lastly, peace also requires a common commitment to care for creation, he said.

Pope Francis said he hoped that after the recent Paris Agreement, there would be increased cooperation by everyone in response to climate change. Because, he said, “the earth is our common home and we need to realize that the choices of each have consequences for all.”