Positive changes seen since 1978 pastoral on persons with disabilities 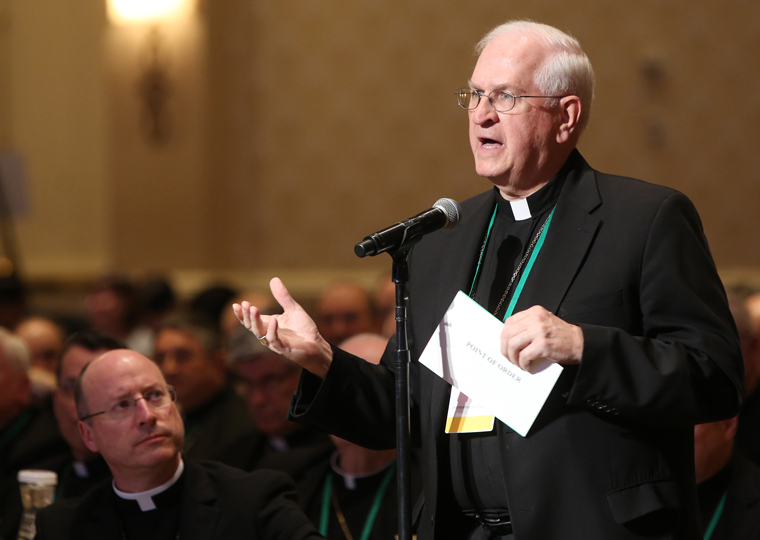 By Mark Pattison Catholic News Service
BALTIMORE (CNS) — The 40th anniversary of the U.S. bishops’ “Pastoral Statement of U.S. Catholic Bishops on Persons With Disabilities” is a cause for celebration, said Archbishop Joseph E. Kurtz of Louisville, Kentucky, episcopal moderator of the National Catholic Partnership on Disability.

The pastoral looked at persons with disabilities and ” their ability to be more fully engaged in the life of the church,” Archbishop Kurtz said Nov. 14 during the fall general meeting of the U.S. bishops in Baltimore.

“Now you can look at your own local churches” he added, and see that their participation has “enriched not only their own lives but the lives of so many other people.”

The NCPD board issued a statement, “A Call to Encounter and to Wholeness,” on the 40th anniversary of the U.S. bishops’ pastoral.

“The pastoral statement cautioned that when that inflated sense of self-importance is given free reign, it can drive the wedge of prejudice and injustice into the heart of the Christian community. Even if there is no outright hostility from non-disabled Christians toward Christians who have a disability, the presumption that they are not one of us undermines the integrity and communion of the parish community.”

The NCPD board also took stock of developments in the church over the past 40 years. They include: catechetical guidelines in the 1979 document “Sharing the Light of Faith”; the bishops’ own 10th- and 20th-anniverary reflections on the 1978 statement; their 1995 “Guidelines for the Celebration of the Sacraments With Persons With Disabilities” with updates in 2017; and the bishops’ approval in 2003 of the publication of the National Directory for Catechesis, which included an extended section with guidelines on religious instruction and sacramental catechesis for persons with disabilities.

The NCPD board in its statement issued a fivefold affirmation of Catholic teaching, including:

— “The inalienable dignity of every human being, formed in the image and likeness of God;

— “The respect, honor, and protection that are due to every person from conception to natural death;

— “That Christ’s saving grace and call to personal friendship extends to every member of the human family;

— “That no psychological or physical condition on its own can separate someone from encountering the love of God in Christ;

— “And that each person baptized and incorporated into the body of Christ is called to holiness and given the grace to respond to this call.”

“Persons with disabilities have the proper right to be active participants in the life of the church. We recognize that the bare assertion and protection of rights can become a sterile exercise whenever it lacks the Christian presumption of our common call to friendship with one another in Christ,” the NCPD board said.

“For these reasons, we seek to foster the full and meaningful participation of individuals with disabilities in the life of their parish communities by offering NCPD resources and training to assist diocesan efforts to educate clergy, pastoral staff, and lay leaders to further their outreach to and support of parishioners with disabilities in every aspect of parish life.”

It added, “No parish community is healthy and flourishing if it does not welcome persons with disabilities. Vulnerability, limitation and dependency are an ordinary part of every particular human life.”

Archbishop Kurtz lauded the NCPD, which he said was “formed following that pastoral letter. From all the many efforts that have promoted, the welcoming and the engagement of persons with disabilities within our church and within our society, their work has been mighty.”

He added the NCPD statement is “both an affirmation of what has happened, and a commitment of what we’re making as a board, and something you as bishops might take back to your diocese in the hopes that you might do the same.”

Archbishop Kurtz gave a special word of thanks to Jan Benton, who he said was in her last year as NCPD executive director, and been involved as a staff person since “right after the pastoral letter was promulgated.”