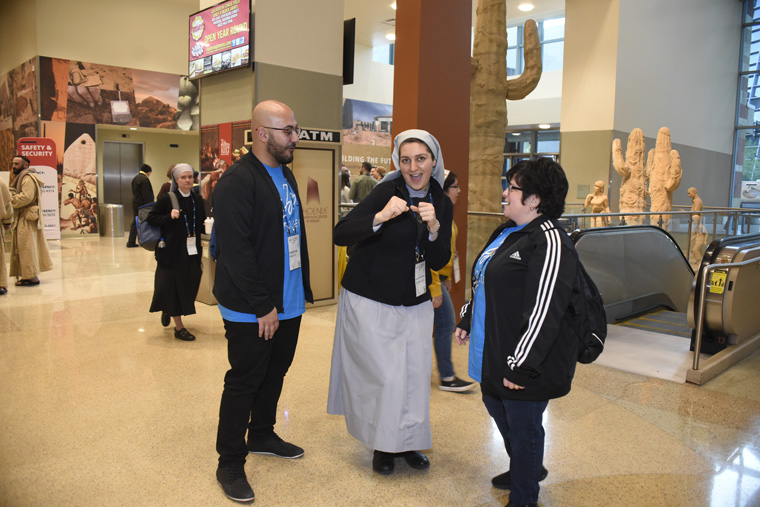 PHOENIX (CNS) — Though more than 8,500 Catholics attended the Fellowship of Catholic University Students’ annual Student Leadership Summit to start the new year, the event focused on the power of prayer and sharing Christ in small groups.

Participants learned how prayer, small-group discipleship, proclaiming the Gospel and having a Catholic worldview can help influence others to follow Jesus during the conference’s fourth day, Jan. 2.

FOCUS staffer Kelsey Skoch said that everyone deserves to hear the Gospel and “when you preach the Gospel, something always happens.”
In a workshop, she recounted how a Baptist woman contacted her after overhearing a FOCUS missionary share the Gospel with a student in a coffee shop.

Later in the session, Jim Jansen, another FOCUS leader, spoke on the need for missionary disciples at parishes. He followed up with a strategy laid out in the Book of Acts: teaching, fellowship, the breaking of the bread and shared prayer, emphasizing that prayer is the first step.

Kevin Cotter, a former FOCUS missionary and current executive director of The Amazing Parish, spoke about how changing one’s prayer can change the world and the person who is praying. He suggested that parish staffs develop a culture of prayer, teamwork and discipleship.

Father Michael Gaitley, director of evangelization of the Marian Fathers of the Immaculate Conception, discussed how anyone can teach the Gospel. He called the practice “spiritual multiplication,” which happens to be a strategy employed by FOCUS to share the Gospel in daily life.

He said such work was the “heart of evangelization.”

Damon Owens, founder and executive director of JoyToB, a teaching ministry, called on his audience to develop a relationship with each member of the Holy Trinity, spend time in community and to go out on mission to society.

There is “no such thing as a halfway Christian,” Owens said in relaying the idea of renouncing everything to serve Christ and giving God everything, understanding that God will give return graces in abundance.

“Give him everything and you will not be disappointed,” Owens said.

Keynote speakers of the evening were Jonathan Reyes and Helen Alvare who spoke about acknowledging the basic idea that humans were created by God and not created by themselves, which runs contrary to some modern notions.

Reyes, who leads evangelization and faith formation for the Knights of Columbus, suggested prayer, study and God forming one’s mind. Among his reading recommendations were “The Great Divorce” by C.S. Lewis, “Theology and Sanity” by Frank Sheed, and “Orthodoxy” by G.K. Chesterton.
Alvare, professor of law at the Antonin Scalia Law School at George Mason University, also pointed toward prayer, stressing that holding a Catholic worldview and participating in the sacraments are critical elements of a Catholic life.

Her fast-paced talk prompted widespread laughter after she asked the audience to identify and remove three obstacles or distracting factors in their lives, and then that they would have only two left after they put their phones away.