Purity is seen in how one treats oneself, others, papal preacher says 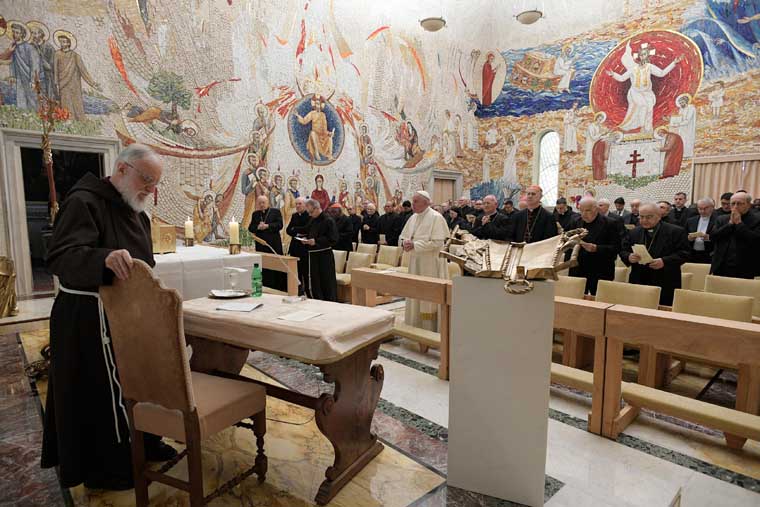 VATICAN CITY (CNS) — If Catholic morality in the past seemed so obsessed with preventing sexual sin that it ignored sins of injustice, today “we have gone to the opposite extreme,” seemingly concerned only with how people treat others, not with how they treat the gift of their bodies, the papal preacher said.

“In the past, morality emphasized the sins of the flesh so unilaterally that it led to real neuroses at times, to the detriment of concern for the duties toward our neighbor and to the detriment of the virtue of purity itself,” Capuchin Father Raniero Cantalamessa told Pope Francis and members of the Roman Curia.

On the Fridays of Lent and Advent, Father Cantalamessa leads reflections for the pope and his aides in the Redemptoris Mater Chapel of the Apostolic Palace. For the final Lenten meditation of 2018, he spoke March 23 about the virtue of purity.

But the two go together, the Capuchin insisted. “Purity and love of neighbor represent dominion over self and the gift of self to others. How can I give myself if I do not possess myself but am a slave to my passions?

The virtue of purity involves self-control, including in eating, speaking, looking and in sexuality, he said. But the Christian motivation that makes it a virtue does not lie in strength alone, rather, as the First Letter to the Corinthians explains that “it is not permitted to sell oneself or to use oneself just for one’s own pleasure for the simple reason that we no longer belong to ourselves; we are not our own but Christ’s. We cannot decide how to use something that does not belong to us.”

But today, “we live in a society, in terms of morals, that has fallen back into full-blown paganism and full-blown idolatry of sex,” the 83-year-old preacher told the pope and Curia officials.

“The daily news of abuses and scandals in this field, including among members of the clergy and religious, are there to remind us of this bitter reality,” he said.

Father Cantalamessa said he was not calling for a return to “a purity based on fear, taboos, prohibitions and men and women avoiding each other as if the other is always necessarily a snare and a potential enemy rather than a help.”

The response, he said, is to “do something new” at the prompting of the Holy Spirit. “He is asking us to bear witness to the world to the original innocence of creatures and things.”