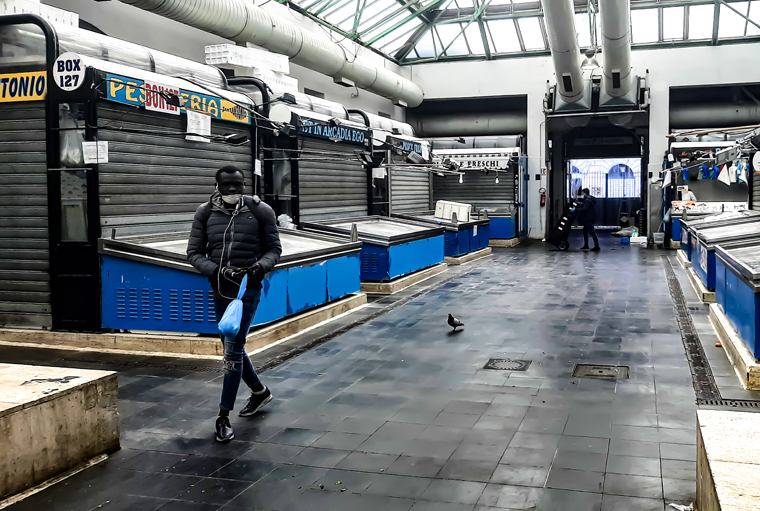 Dario, 15, and Adriana, 14, were jumping for joy in our living room, which is still a bit of a shambles since we only moved back to Rome in January, just in time for the coronavirus global pandemic, with Italy set to become its epicenter.

For myself, a newly single mother in Rome, I saw endless weeks stretching ahead of me, characterized by largely unstructured time. I had relocated to Rome after six years away, and the point was to eventually find gainful employment, once I had managed to smooth my kids’ somewhat precipitous transition into Italian public schools after having studied in international schools first in Kenya and then for a short time in Myanmar, before I decided to pack it in and move home.

Shortly after the school closure, the government announced a lockdown beginning March 8 of the Lombardy region in the north, and a nationwide lockdown soon followed. On March 12, the World Health Organization announced that COVID-19 is officially a pandemic.

How would I describe the ensuing weeks? It sounds ridiculous, but in a word: exhausting. And it’s all but given we will be under a lockdown far beyond the originally announced April 3.

I am now the sole caretaker of two kids, a medium-sized dog and two cats.

My teenage son, oblivious to concerns beyond his own, initially harangued me about finding him a LAN cable for max internet speeds while gaming. And he wants curtains in his room, because people are always hanging out in their windows with nothing else to do but to gawk outside and shout to the neighbors across the way, Roman style.

Meanwhile, gradually, the fish stalls at my local market began shutting down. “I’m afraid,” said my regular fishmonger, Laura, as she and her husband shuttered their operation for what she said would be a week, maybe more. Days later, most of the fish sellers were gone. It made sense, I told myself, as the fish won’t keep, deliveries along a supply chain in refrigerated trucks might be difficult, and I guess even fishing would be a risk for transmission of the novel coronavirus.

But I find myself worrying about milk, and when that, too, might disappear.

My teens are no longer in school. While for the first 10 days or so of quarantine I reveled in the fact I could pick up clams at an 80% discount, now the cooking, the cleaning, the cooking and cleaning again, the laundry, the food shopping, walking the dog and then applying for jobs on the side is just that: absolutely exhausting.

Last Saturday, I hit a wall. I felt sick. Did I have the coronavirus? That is, after all, the greatest fear, and another source of exhaustion. I fear I leave the house too often to go food shopping, because in Europe we don’t have gargantuan refrigerators. Who would take care of my kids if I were to fall sick?

Exhaustion also comes from fitful sleep, with worries about our health and the health of family and friends.

For all its failings, I’m on Facebook a lot these days, which helps, and I’ve started just picking up the phone, like we used to do before calling people out of the blue became seen as being intrusive.

It annoys me to see some of the clueless blathering and joking around about this crisis in the United States, which maybe reminds me of myself when I was making spaghetti with discounted clams. How long can we sustain this, with my butcher, my greengrocer and others all saying they’re going under financially?

Yesterday in the supermarket, I saw a Somali woman I met years ago. She recognized me as we passed each other in the milk aisle, keeping our distance — masks on, gloves on and the whole shebang. She was one of the people who gave me such a warm welcome when I returned to Rome in January. She bought me a cappuccino at the time, and we sat and talked like old friends. After all these years, now I know her name: Amina.

Through the muffling masks at a distance (she moved across to the pasta section), we talked about our families.

“They didn’t want me to come to the supermarket, but what else can I do?” Amina said.

I said I know the feeling — when you’re not working, you’re trying to make ends meet, and you cannot stock up for weeks in advance and just shut yourself off from the outside world. She has a son with special needs and an aged mother at home. She is also a single mother, which I discovered over our cappuccino in January.

Amina is among the dozens of people I hadn’t seen in years, part of that subtle social fabric that we call home and that I took for granted. Since January, I’ve made a point of learning all these people’s names — the people I would always chat with while having my espresso, at the market, at the supermarket or at the corner pizza shop. Upon my return, I found it so deeply sad and somehow wrong that I didn’t know so many people’s names when I used to see them almost every single day.

Today, I’m going to call Amina. The other day, it was my college roommate who got the call. Her husband is helping expand the ICU at the hospital where he works in Connecticut, preparing for an influx of coronavirus patients. The day before that, I spoke with a great love I had just before I left on my journey to Italy, half of Africa, a short stop in Asia and back to Italy. Tomorrow, I’ll call the lady where — when not under lockdown — I take my morning cappuccino, another single mom with three outstanding grown boys. Her name is Adriana, like my daughter, whose name is strong like that of a Roman emperor.

My Dad, a gentle soul, knew everyone’s names everywhere he went. I realize now in my middle age that he wasn’t just a corny guy, but that he had a grasp of something many of us never seize upon, or maybe we’ve lost increasingly over time.

Reach out to your neighbors, your friends, those people you chitchat with every day. Offer to do the grocery shopping, or whatever someone needs. Be connected until we can see each other again, and hold tight — now, but also when we come through this together on the other side of the epidemic curve.