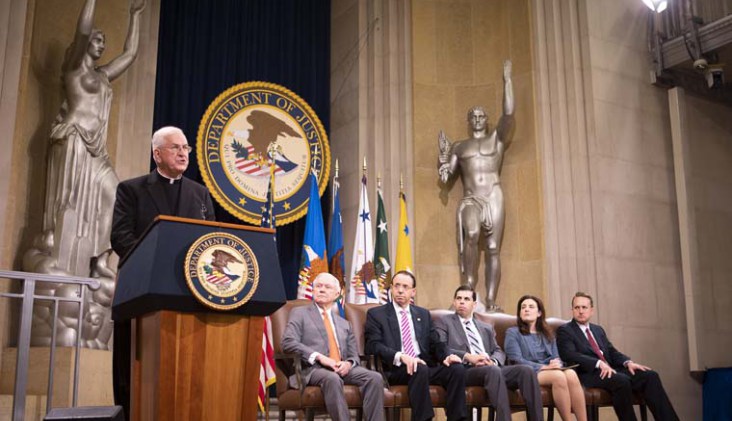 WASHINGTON (CNS) — Archbishop Joseph E. Kurtz of Louisville, Kentucky, gave three reasons why religious freedom is important to the Catholic Church in a speech July 30 at a conference on the issue at the Justice Department in Washington.

“We are called by Jesus Christ to inspire a culture, religious freedom gives us a space to serve, and we can solve social problems better when all of us work together to find a solution,” said the archbishop, who is chairman of the U.S. Conference of Catholic Bishops’ Committee on Religious Liberty.

This vision of the human person, he said, is essential to healthy politics.

“We want our political culture to respect that freedom as much as possible, because when we lose respect for the search for truth, our politics degenerates into power-seeking for the purpose of imposing one’s will on others,” Archbishop Kurtz said. The end result is “losing respect for basic human dignity.”

In contrast, protecting religious freedom is part of the church’s “vision of human flourishing,” he said.

“At the heart of all the church’s efforts is a vision that we uphold that serves the common good. We propose this vision with passion for the good of individuals and of the nation, and religious freedom means that we are free to propose this vision.”

Leading into his second point, he said that the vision of human flourishing the church proposes includes the ability for the Catholic Church to have “the space to serve with integrity.”

The archbishop expressed concerns about a number of threats to the church’s ability to fulfill its mission.

“When activists try to force Christian ministries to violate their consciences, they force Christians into a bind. Service is in our DNA, but so is the truth about the human person,” he said.

He said that the Obama administration’s contraceptive mandate imposed on all employers, including religious employers with a moral objection to it, was one example of an attempt to force Christians to violate their consciences.

“The HHS mandate greatly alarmed the bishops because it would require people of faith to make an impossible choice between paying extraordinary fines or violating the faith that calls them to serve the poor.” Archbishop Kurtz said.

The U.S. Department of Health and Human Services, or HHS, implemented the mandate as part of the Affordable Care Act.

Although the Trump administration removed the mandate, Archbishop Kurtz expressed concern about the state of Catholic child welfare organizations.

“One of our biggest concerns is the ability of our child welfare organizations to place the foster children with families consistent with our teaching.”

He explained that the opioid crisis, among other things, was leading to a noticeable increase in the number of children requiring help from child welfare organizations.

“Yet, as a real crisis emerges, faith-based child welfare providers are being targeted for closure because of the convictions about the family. Service providers who have a track record of excellence have been shut down.”

He mentioned that the city of Philadelphia was trying to force Catholic foster care providers to comply with its nondiscrimination policies and require them to place children with same-sex couples, and that the ACLU sued the state of Michigan because Michigan has a law permitting foster care agencies with religious beliefs to reject qualified same-sex couples as placements.

“Faith-based organizations have a crucial role to play in adoption and foster care,” he said.

He also explained that they have an advantage over other foster care agencies because “they can go into churches and ask people who share their faith if they are called to live it out in this way.”

“There are some who claim that faith-based organizations must give up our convictions when we partner with the government to provide much-needed social services,” but Archbishop Kurtz said that forcing them to give up their convictions is not necessary.

“Faith-based organizations are some of the most trusted groups within our society and excluding them makes no sense in a holistic society like ours,” he said.

In addition, Archbishop Kurtz said that “we should look to have all hands on deck when it comes to tackling the greatest needs of our day.”

“We’re very grateful for all the service done by people of faith every day both in our country and around the world. Religious freedom is vital to the common good.”