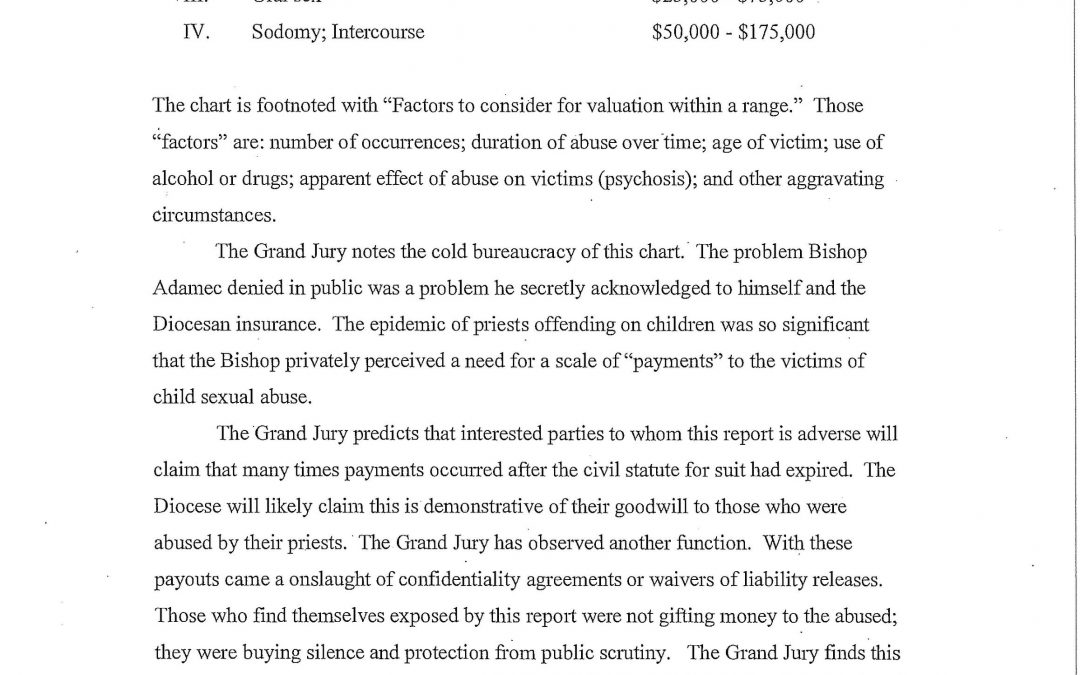 ALTOONA, Pa. (CNS) — Hundreds of children were sexually abused over at least 40 years by priests and other religious leaders in the Diocese of Altoona-Johnstown, a statewide grand jury found.

At least 50 priests or religious leaders were involved in the abuse and diocesan leaders systematically concealed the abuse to protect the church’s image, according to a grand jury report released March 1 by Attorney General Kathleen G. Kane.

The report identifies priests and other leaders by name and details incidents going back to the 1970s. Kane said that much of the evidence revealed in the report came from secret archives maintained by the diocese that was only available to the bishops who led the diocese over the decades.

Victims also testified to the grand jury, which was approached by Kane in April 2014 after local law enforcement officials and district attorneys of several counties approached her office with information about the abuse.

“We have had evidence of law enforcement perhaps looking the other way, law enforcement working with the diocese to let the priests move on, retire or go to a psychiatric facility in lieu of charges,” she said.

Kane did not rule out charges being filed against diocesan officials for their role in not reporting abuse and repeated several times that the investigation is unfinished.

The report said the diocese cooperated in the investigation.

Tony DeGol, diocesan secretary for communications, said in a statement that the diocese had received the report and was reviewing it. The diocese pledged to continue cooperating with authorities in their investigation “as part of our commitment to the safety of all children,” the statement said.

“This is a painful and difficult time in our diocesan church,” Bishop Mark L. Bartchak of Altoona-Johnstown said in the statement. “I deeply regret any harm that has come to children, and I urge the faithful to join me in praying for all victims of abuse.”

The diocese continues to follow its youth protection policy, which calls for mandatory reporting of all abuse allegations to law enforcement authorities and requires criminal background checks and education for clergy, employees and volunteers who work with children, the statement said.

Kane echoed the grand jury report in crediting Bishop Bartchak, who was appointed to the diocese in 2011, for reporting abuse allegations to authorities and removing accused priests from ministry.

Kane’s office began investigating abuse claims in 2012 and after two years asked the grand jury to hear evidence that had been gathered. By then the grand jury could not indict any of the suspected abusers because the state’s statute of limitations had expired.

In Pennsylvania, injury victims have two years to file a civil suit while the time frame for filing criminal charges varies, depending on the age of the victim. An assistant to Kane said at the press briefing that the names of priests were included in the report in incidents in which the statute of limitations had expired.

Amy B. Hill, spokesperson for the Pennsylvania Catholic Conference, said in an emailed statement that the state’s statute of limitations on sexual abuse cases has been raised over the years from age 20 to age 50 for criminal prosecutions and age 20 to age 30 for civil actions.

The Catholic conference has maintained that the statute of limitations not be changed, a stance that is in line with the Task Force for Child Protection, which was established by the General Assembly in the wake of the Jerry Sandusky sexual abuse revelations at Penn State University, Hill said.

The task force, however, recommended an overhaul of state child protection statutes that resulted in more than 20 laws being passed, she said.

The report said the grand jury reviewed more than 200 exhibits and heard testimony from an unspecified number of witnesses.

The report provides details of abuse — sometimes in graphic language — by 34 priests against hundreds of victims, some of whom Kane said were as young as 8 years old. It said other complaints had been made against a teacher who was studying to become a deacon, a choirmaster, a coach and members of religious orders.

The investigation uncovered how two bishops since the 1960s had taken steps to prevent scandal from overtaking the diocese by moving priests to new assignments after allegations were made against them and how diocesan officials used their influence with law enforcement and elected officials to prevent criminal charges from being filed against clergy, according to the report.

Grand jurors outlined actions by Bishop James J. Hogan, who led the diocese form 1966 until 1986 when he retired — he died in 2005 — and his successor, Bishop Joseph V. Adamec, who retired in 2011, for failing to report abuse allegations to police. Kane said both bishops covered up the abuse to protect the church’s image.

A raid on diocesan offices in August in Hollidaysburg, near Altoona, led to the discovery of what Kane called a “secret archive.” Officials with Kane’s office uncovered dozens of handwritten notes by Bishop Hogan, letters and documents sent to Bishop Adamec, statements from abuse victims, correspondence with offending priests and internal correspondence on clergy abuse matters, the report said.

The grand jury report said the investigation by Kane began after a referral by Kelly Callihan, district attorney in Cambria County, one of eight counties in the diocese, who was investigating child sexual abuse incidents from the 1990s at Bishop McCourt Catholic High School in Johnstown. The investigation also involved the diocese and the Johnstown Police Department, according to the report.

As the investigation gained momentum, officials from the diocese and victims testified to the grand jury.

The report questioned the effectiveness of the diocese’s Allegation Review Board, which as established under the “Charter for the Protection of Children and Young People” adopted by the U.S. Conference of Catholic Bishops in 2002. It said that Bishop Adamec appointed its members and that its recommendations went through the bishops’ office for review.

Kane urged sexual abuse victims to turn to law enforcement first to report incidents of abuse rather than the diocese.

Kane’s office also established a hotline for people to report abuse allegations. Victims and witnesses can call (888) 538-8541 to offer information they may have about suspected abuse.

Editor’s Note: The grand jury’s report can be found online at http://bit.ly/1QRMAn3.