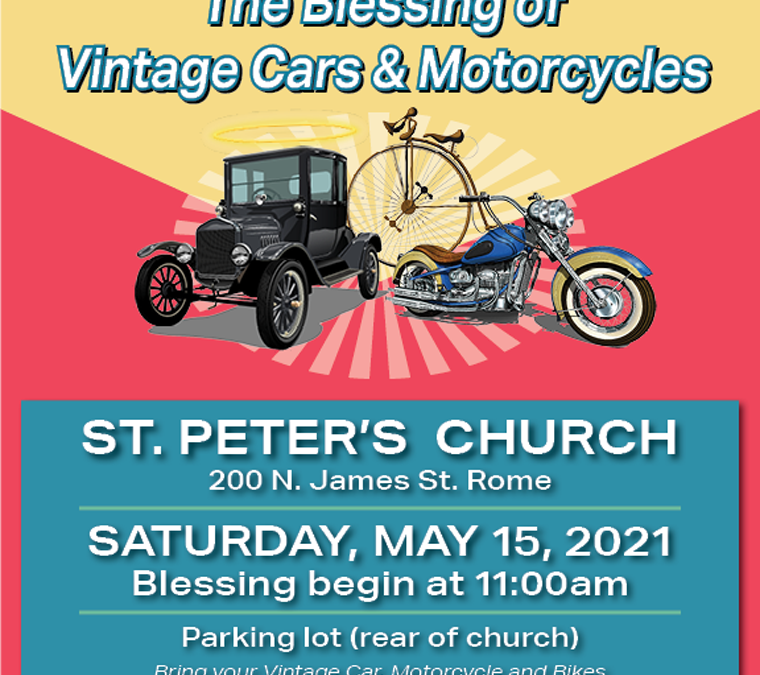 Many of the approximately 25 vehicles being blessed were over 25 years old. The oldest cars were two 1929 Ford Model A Sedans: a Tudor and a Fordor. Other cars in the group were two 1930 coupes, a 1937 Jaguar SS100 Kit car, 1941 Chrysler, 1953 Chevy 210 Series, 1956 Ford Custom, muscle cars from the ’60s, Pontiac Firebird, 1979 Pontiac Bonneville, 1983 Buick Riviera Convertible, up to a late-model Toyota crossover. Also joining in were some Harley-Davidson and Indian motorcycles.

The 32.2-mile tour through northern Oneida County started from the rear of St. Peter’s at 200 N. James St. and traveled to Lee Center and Point Rock. From Point Rock the parade headed east to the hamlet of West Branch and back to Rome via Route 26, Elmer Hill Road, and Golf Course Road to Delta Dam. From there it continued down Route 46 to N. Madison Street and ended back at St. Peter’s. Fortunately, the ride went well with no breakdowns.

Father O’Brien called the day “a great way to start summer with friends and parishioners.”

Additional pictures and video can be found at stmarysstpeters.com and facebook.com/StMarysStPetersParish.

Joseph Stanton is a member of St. Peter’s Parish.