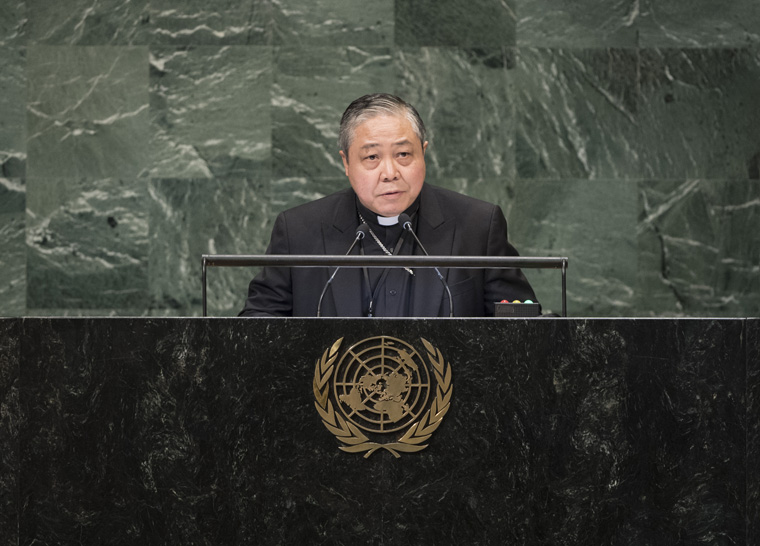 UNITED NATIONS (CNS) — Many terrorist attacks and other violence against houses of worship, religious sites and faith communities around the world “are finally receiving the attention, condemnation and committed response they deserve,” Archbishop Bernardito Auza said June 24 at the United Nations.
The archbishop, who is the Vatican’s permanent observer to the U.N., spoke of the attacks on Pittsburgh synagogues, on Catholic churches and an evangelical community in Sri Lanka, on Christians in some regions of Nigeria, in Iraq and Syria, and countless other such attacks.

“It is a big step in the right direction that the international community is calling attention to these attacks through General Assembly Resolution 73/285, the recently proposed U.N. Plan of Plan of Action to Safeguard Religious Sites and other mechanisms,” he said.

But at the same time, “even the best international instruments are not enough,” Archbishop Auza said. “There is a need to focus on the responsibility and actions of states to protect all of their citizens equally as well as to address with vigor the cultural factors necessary to promote tolerance and inclusivity.”
The archbishop outlined several actions he said were needed to achieve such tolerance and inclusivity, starting with “a robust promotion of the right to freedom of conscience, religion and belief.”

“Failure to respect and ensure (this) freedom … fosters an environment in which believers’ other rights, including their right to life, are more easily violated,” he said.

“A second step is guaranteeing the equality of all citizens before the law, regardless of their religious or ethnic identity, as a basic demand of justice,” Archbishop Auza stated.

“Even in places where one religion is accorded special constitutional status,” he continued, “the right of all citizens and religious communities to freedom of religion, equality before the law, and appropriate means for recourse when their rights are violated, must be recognized and defended in order to maintain harmonious and fruitful coexistence among individuals and communities.”

Next, he said, there must be “a positive and respectful separation of religion and state. These two spheres ought to collaborate according to their specific competencies for the good of all citizens, but they should not be confused or conflated.”

He also called for appealing “to all political, social and religious leaders to condemn the use of religion to incite hatred and violence or to justify acts of oppression, exile, murder or terrorism.”

“To be effective and not alienate,” Archbishop Auza said, “this appeal must simultaneously ensure that religions themselves not be blamed for homicidal madness, but rather the blame remain with those who misinterpret or manipulate religious belief to commit evil, supposedly in God’s name, for political or ideological purposes.”

Also needed are “a real commitment to intercultural and interreligious dialogue” and “effective education,” the prelate said.

“Dialogue is essential to catalyzing the path to mutual understanding, tolerance, acceptance of others, cooperation and peaceful living together,” he explained.

On the education front, Archbishop Auza said, “Society reaps what it sows.”

Therefore, he continued, teaching in schools, pulpits and through the internet must “not foment intransigence and extremist radicalization” but instead train students in “dialogue, reverence for the dignity of others, reconciliation, justice, and respect for the rule of law,” he said.

“The importance of forming the head and the heart cannot be overstated,” Archbishop Auza said.

“Proper education gives people, especially the young, the ability critically to assess the destructive narratives and appeals of demagogues,” he said, “as well as the confidence to proclaim and live as citizens a different and constructive message.”