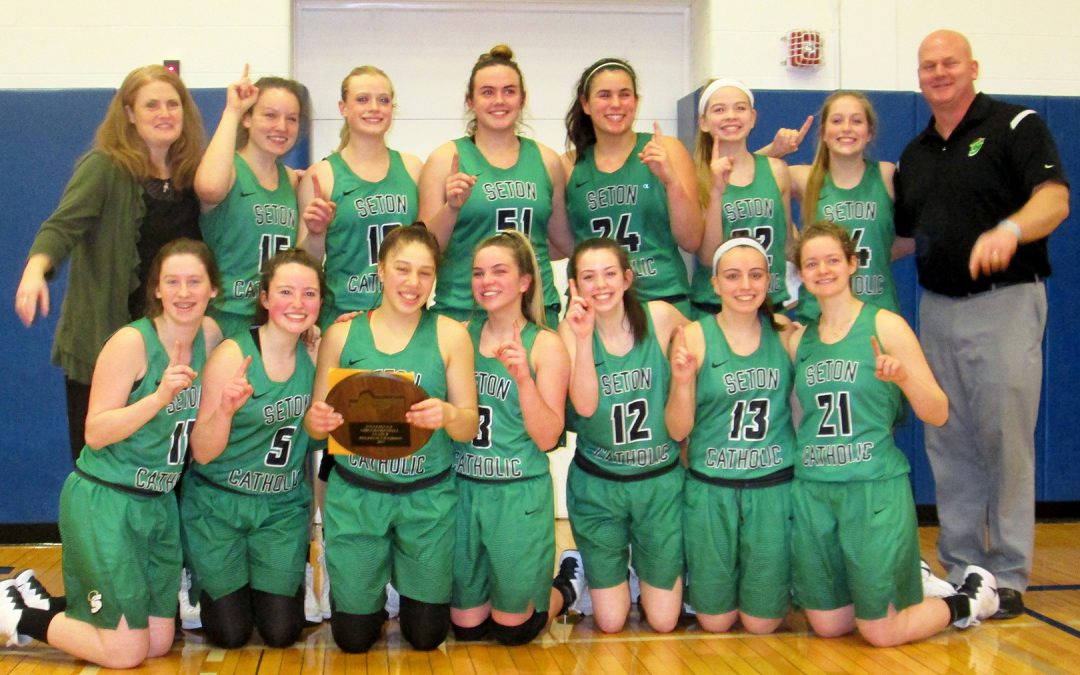 Bishop Ludden had a big “motor,” but Seton Catholic owned the Run-and-Gun Highway.

Seton won 70-61 as Lexi Levy scored 29 points to help the Saints take the regional Class B championship and advance to the state semifinals. Ludden’s Danielle Rauch countered with 25 points and reminded Seton of a Ferrari as she blazed for buckets. The two big stars entertained the large crowd at Onondaga Community College.

“She’s very fast, she has a very high motor,” Saints guard Hanna Strawn said of Rauch, “but we got it done.” Strawn herself motored the entire game, playing 32 minutes along with Levy. “Lexi came home with a couple of really big key shots when we needed them; Julia [Hauer] with some key rebounds,” Strawn said.

Asked if there is a special intensity playing another Catholic school like Ludden this deep into the playoffs, Seton Coach Colleen Jayne said:

“Well, I think so, only because we’re very small schools. Everybody knows each other, everybody’s friends, everybody’s close. These guys, there’s a bunch of them that play against my kids in AAU [Amateur Athletic Union games]; there’s a lot of extra stuff that people don’t really know about. I mean I know Lexi and Hanna and Julia and Ava [McCann] all play against Rauch during their AAU season. So they know somewhat about each other.

“And then you get to the Catholic school thing and … it’s a work-hard thing.”

Levy set the workhorse tone when she grabbed a rebound and sent a long pass to Hauer, who put in a layup for a 4-0 lead. The pace was ferocious the entire game, with plenty of contact. Ludden’s Laura Patulski picked up her second foul before the first quarter ended with the Saints leading 16-9.

Constantly pushing the ball with no wasted perimeter passing, the teams played evenly in the second quarter. Ludden got a nice reverse layup from Rauch and a jump shot from the side by Meg Sierotnik, and Seton countered with several layups and also a 3-point jumper from McCann.

The Saints nipped the Lady Gaelic Knights 13-12 in the second quarter and took a 29-21 halftime lead.

With a little over 7 minutes left in the third quarter, Levy hit a 3-point shot from the top of the key for a 37-23 lead that seemed devastating. Sierotnik, Patulski, Aurora Deshaies, and Rauch responded for Ludden, but Hauer and Marina Maerkl helped Seton take a 53-40 going into the final quarter.

But Ludden made a move. With less than 3 minutes remaining, Strawn’s father, Phil, sitting in the first row, yelled, “Hanna, relax!”

She got the message and Seton kept its head, but Ludden was thinking “comeback.” With less than 2:30 left, the Lady Gaelic Knights’ Deshaies made a free throw that cut Seton’s lead to 63-57.  At the 2:18 mark, Ludden’s Patulski hit the floor hard and lay on her back for a few minutes. “We love Laura!” the Ludden fans chanted.

But closing the scoring for Seton were Maerkl, McCann, and Hauer.

Phil Strawn, happy to relax at last, was thrilled for his daughter’s team. “We played great,” he said. “We took their best shot. Danielle Rauch played unbelievable. And we just kept at it, we didn’t give up, and we made some free throws down the stretch, and we got it done.”

“I think one of the biggest things for us is we have 14 kids that are all in,” Saints Coach Jayne said. “It starts in practice. They push each other, they make each other better every day, and they’re not afraid to go hard at the best players on the team because they know it’s going to make them better. … And I feel like with all five girls that start and the two that contributed off the bench today, I can’t say enough about them.”

Regarding the good sportsmanship in the game, she said, “I’m hoping that I teach that, model that with these kids; I want to make sure that they’re all good kids as well as good basketball players. … A couple of them were talking to Danielle at half-court; they’re just kind of talking to each other and they get it.”

Asked about Rauch, Coach Jayne said, “I thought she was awesome. … She played very well. … We’re preparing for her, but they have some very good role players. Laura Patulski impresses me so much; she’s a grindstone girl who’s going to put it all on the floor, and she did today. And Meg, she can hit key shots; she hit a key shot in the corner. They have a very good team, and I’m just happy that we succeeded.

It helped that McCann and Hauer were successful on several free throws at the end.

“I think that we communicated on defense and really helped each other,” McCann said. “We when got screened, we’d hedge and help. And I think we hit some really key shots.”

Of Ludden, she said, “We knew we could beat them, but they are definitely a great team. We knew we had to bring our all in order to win.”

“It was very intense,” Hauer said of the competition. “We were both playing with a really good purpose.”

“We want to be the best Catholic school, so we wanted that W,” Hanna Strawn said.

Next up for Seton is Beekmantown, from Section VII, in a state semifinal game at 10 a.m. March 17 at Hudson Valley Community College in Troy.

“Our goal is to win a state championship,” McCann said, “and we need each other to get there. … We are confident, we’re determined, and we’re ready to go.”