Secrecy must ‘go out the window,’ Irish archbishop says 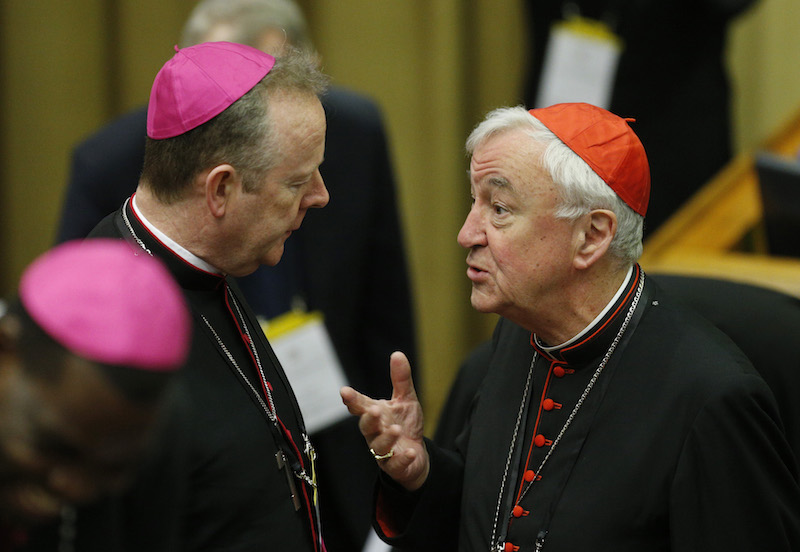 Archbishop Eamon Martin of Armagh, Northern Ireland, talks with Cardinal Vincent Nichols of Westminster, England, during the third day of the meeting on the protection of minors in the church at the Vatican Feb. 23, 2019. (CNS photo | Paul Haring)

VATICAN CITY (CNS) — When it comes to the abuse of children by members of the clergy, using secrecy to hide problems rather than protect victims “must go out the window,” said Archbishop Eamon Martin of Armagh, Northern Ireland.

“Let’s put secrecy aside,” Archbishop Martin told journalists Feb. 23. “Secrecy has been one of the root causes of the problems that we are in today. And therefore, we need to be cautious.”

Secrecy and, more specifically, the imposition of “pontifical secrecy” in cases of clerical sex abuse were raised several times during the Vatican’s Feb. 21-24 summit on child protection and the clerical abuse crisis.

The pontifical secret ensures cases are dealt with in strict confidentiality. Vatican experts have said it was designed to protect the dignity of everyone involved, including the victim, the accused, their families and their communities.

Already in September 2017, members of the Pontifical Commission for the Protection of Minors asked Pope Francis to reconsider Vatican norms maintaining the imposition of “pontifical secret” in the church’s judicial handling of clerical sex abuse and other grave crimes.

When asked if he spoke to Pope Francis regarding a possible revision of how “pontifical secrecy” is applied in clerical sex abuse cases, Archbishop Martin said that although he hasn’t asked the pope about it, “the meeting is asking that question, not just Eamon Martin.”

“I get a very strong sense from Pope Francis that he wants to do whatever has to be done,” he said.

Linda Ghisoni, a canon lawyer who serves as a consultant for the Congregation for the Doctrine of the Faith and is undersecretary for laity at the Dicastery for Laity, the Family and Life, called at the summit for the norms regulating the use of “pontifical secrecy” to be re-examined.

Ghisoni said that while there are values to protect, including the good name of the accused, unless and until he or she is proven guilty, a revision could lead to “the development of a climate of greater transparency and trust, avoiding the idea that the secret is used to hide problems rather than protect the values at stake.”

Echoing Ghisoni’s sentiments, Archbishop Martin said that while he is not advocating for a “fool-hardy transparency” that ignores a person’s right to privacy, access to files concerning abuses must be “opened to those who have this responsibility for investigating crime and, indeed, keeping children safe.”

“We’re not here to throw someone to the lions without a proper due process,” he said. “But I do think that I would be extremely cautious about being overly secretive at any level in this issue.”

In his speech Feb. 23 at the summit, German Cardinal Reinhard Marx of Munich and Freising discussed the issue, telling the pope and the bishops present that he saw no convincing reason why the “pontifical secret” should apply “to the prosecution of criminal offenses concerning the abuse of minors.”

Cardinal Marx also said the church should define the goal and limits of “pontifical secrecy” and redefine confidentiality and secrecy, distinguishing them from “data protection.”

Otherwise, he said, “we either squander the chance to maintain a level of self-determination regarding information or we expose ourselves to the suspicion of covering up.”

Archbishop Charles J. Scicluna of Malta told journalists during a press briefing Feb. 23 that “there is movement” in the meeting on the issue of “pontifical secrecy” so that the church does not “bind these procedures with a top-heavy element of confidentially.”

The discussions about secrecy, he said, involve not only how the process of handling abuse cases is kept confidential, but also how the church communicates with victims, favoring a “definitive movement toward what I have called a culture of disclosure.”

Recalling one victim who reached out to him to make an accusation against a priest for abuse, Archbishop Scicluna said that upon checking, he discovered that the priest already had been tried and removed from ministry.

This lack of communication means victims will be led to believe their allegations have not been heard or followed up on, he said. It may be that it has been “followed through, but this communication is missing.”