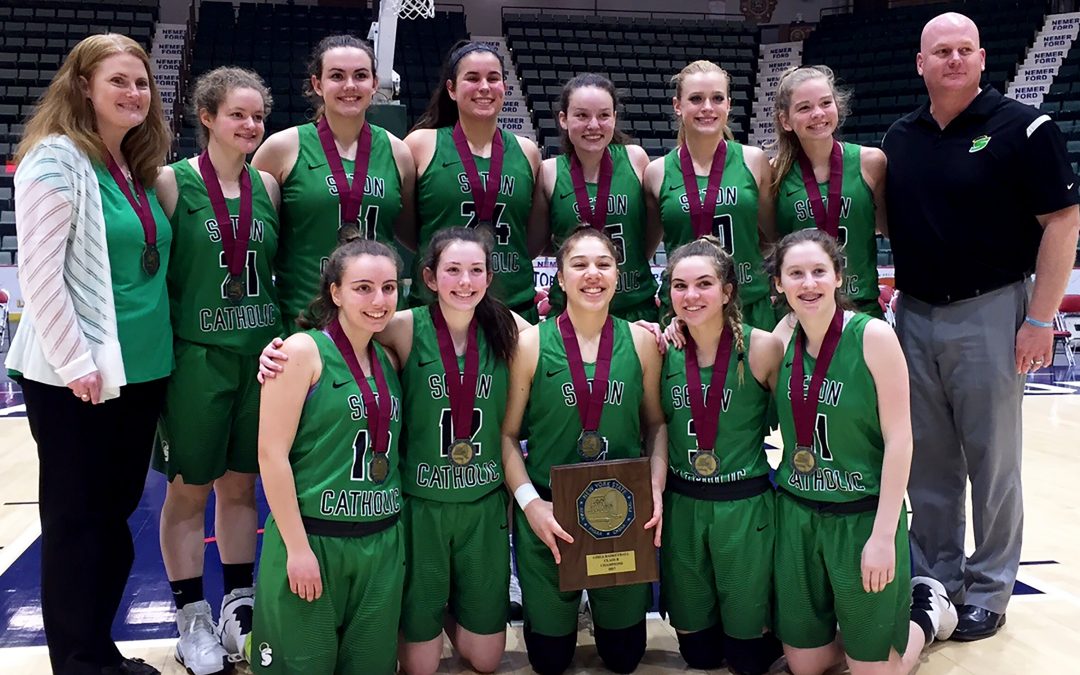 GLENS FALLS — History was made and records fell Sunday in the Federation Tournament of Champions Class B girls basketball title game.

As the buzzer sounded, starters Lexi Levy, Hanna Strawn, Ava McCann, Julia Hauer, and Marina Maerkl — who had been watching from the bench for much of the fourth quarter — sprang to their feet and embraced as the rest of the team closed in for the on-court celebration.

“This is all that we’ve worked for. We all deserve it,” Strawn said. “We worked so hard, and a lot of people don’t see behind the scenes, even out of the season. We’re a family, and we’ve been looking forward to this, and now it’s finally here.”

“They’ve been talking about it since this group has been together,” Seton Catholic Head Coach Colleen Jayne said. “That has been their ultimate goal before Lexi graduated.”

But it was McCann who stole the show Sunday. The junior sharpshooter hit a single-game tournament record eight triples on her way to a game-high 24 points. That gave her 13 3-pointers for the tournament, also a record.

“It was the result of a lot of hard work, going in the gym on days off, snow days, on holidays, whenever I can get in,” McCann said.

The Saints (28-1), as they have done much this post-season, raced out to a commanding early lead and never let up. Seton Catholic, on the strength of nine first-half triples, took a 48-20 lead into halftime.

Seton shot 50 percent from the field in the first half and 45 percent for the game.

Seton Catholic outscored its Federation opponents 167-81, winning by margins of 46 and 40.

Levy chalked up the success the Saints achieved to their efforts off the court.

“It’s the hard work we’re putting in in the gym, waking up at 6 a.m., getting shots up,” Levy said. “Nobody sees that part, and they’re always like, ‘Why are you guys so good? How do you guys do this?’

“It’s because of the outside stuff. So, I want to thank our coaches for all of that, they really push us to be our best.”

The Saints will return four starters — Maerkl, Strawn, Hauer, and McCann. Levy, heading off to play at George Washington University, is predicting a lot more success for Seton Catholic.