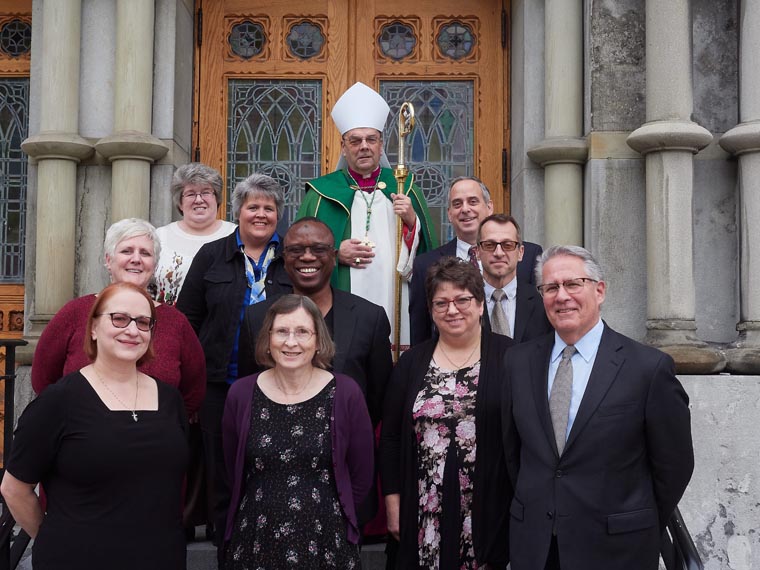 “I have been involved in various ministries over the past 20 years,” she said, “starting when my pastor, Father Joseph Barker at St. Patrick’s Church in Johnstown, personally invited me to help out with religious ed. I said, ‘Sure, Father,’ not knowing he wanted me to actually run religious ed. Since then I have been called and continue to work in the Church.”

Pare (pronounced “Pear”) was among a dozen people commissioned or recommissioned as lay ecclesial ministers Sunday at the Cathedral of the Immaculate Conception in Syracuse.

“We are called to shape our world according to the values of the Kingdom,” Bishop Robert J. Cunningham told the gathering of candidates and their sponsors, families, and friends.

The candidates were also asked to be examples of meaning, purpose, happiness, compassion, prayerfulness, discipleship, and perseverance in good works.

“In the measure you have been given, be generous in return,” said the homilist, Father Joseph E. Scardella.

“Since Vatican II the Church has called for an increasing role of the laity in the mission of the Church,” Eileen Ziobrowski, Ph.D., associate director of Formation for Ministry for the Diocese of Syracuse, said in an email.

Those being commissioned, she said, have completed two years of instruction in the human, spiritual, intellectual, and pastoral elements of formation. They attended workshops and retreats, engaged in spiritual reflection, and worked in parish ministry. They are commissioned to assist pastors by serving the needs of a parish or pastoral-care area.

Pare said that when she moved to Liverpool, she saw that lay people were needed, so she started helping again. Sunday, she thanked her pastor, Father Daniel J. O’Hara of Immaculate Heart of Mary/St. Joseph the Worker; her many instructors in formation; and her classmates.

In her Reflection for this year’s class of lay ministers, she said: “One of my eight children, my 16-year-old son, Matthew, who likes to tease me and call me by my first name, has been asking, ‘Diane, what time is your coronation?’ Or ‘Diane, what is happening at your coronation? … I smile and say, ‘No, Matt, it is my commissioning!’ Today I hope he gets a better understanding of what it means to be commissioned as a lay ecclesial minister.”

Her own mother’s love of the faith led her to the Formation for Ministry program, which usually takes two years to complete. “It took me a few more,” she said, “because of one of my sons having a [benign] brain tumor and later the death of my husband from colon cancer. And although these were devastating moments in my life that caused everything to come to a halt, God was calling me deeper and deeper into relationship with him and greater trust in him.

“Eventually, with the kindness and gentleness of Father [Charles S.] Vavonese, I was able to get back on track and finish.”

Pare’s son Kelly, now 26, had a brain tumor twice. He is a lawyer in the Utica area, with no recurrence.

Pare noted that “everyone has something to contribute.”

For her, that includes making sure that Masses run smoothly, with all the ministers in place and everything set up for the priest. She coordinates her parish’s Rite of Christian Initiation of Adults program. “We journey with people who are interested in becoming Catholic,” she said.

In RCIA, she has encountered at least one person who has examined all the different faiths, read the Bible, researched the Church Fathers, and found  that Catholicism embodies the true  Church.

Commissioned with the task of Parish Service Ministry was Stanley Olkowski, of Our Lady of the Rosary in New Hartford. What stood out for him at the commissioning ceremony were the scriptural passages.

The first, 1 Samuel 3:1-10, includes this line: “The Lord called Samuel again, for the third time. Getting up and going to Eli, he said, ‘Here I am. You called me.’ Then Eli understood that the Lord was calling the youth.”

The second reading, Ephesians 4:1-7, says: “I … urge you to live in a manner worthy of the call you have received. … Grace was given to each of us according to the measure of Christ’s gift.”

The readings, Olkowski said, “reinforced the idea that we’re all called to serve, and we each are given different gifts by the Holy Spirit that we use to serve others.”

Retired from customer service for an industrial-hardware supplier and an architectural supplier, he works in the bereavement ministry. That doesn’t affect him negatively?

“It actually has the opposite effect,” he said. “It’s very uplifting to be able to connect with people at a difficult time in their lives. And I think that they’re very appreciative of someone who takes the time to welcome them to the parish family.”

Formerly a resident of Boston, he moved back to Central New York to take care of his parents. “It was part of God’s plan to do that,” he said. A month later, his father died; then his mother died in 2014.

He soaked up a lot of knowledge in the Formation for Ministry program, he said, including how to expand his abilities as an “empathetic listener.” With that foundation, he started his studies in the diocesan diaconate program two months ago.

“The needs of the Church are many,” Bishop Cunningham said, and Barbara Grigson, who was recommissioned as a lay ecclesial minister, has responded in many ways.

She accompanied her husband, Deacon Thomas Grigson, in his diaconate studies. At St. Joseph Church in Camillus, Barbara, a singer and guitarist, serves in the ministries of Music, Liturgy, Youth, Human Development, and Confirmation Catechist.

“The more I learn about my faith,” she said in an email, “the more I find to explore and share with others! It’s never-ending — and satisfying. For example, I was introduced to the life of (now Saint) Oscar Romero in the ‘Spirituality of Leadership’ class taught by Father Charles Vavonese.”

She added that the saint “meant so much more to me since I knew why he had an impact on his people. Guest instructor Father George V. Coyne, S.J., the former director of the Vatican Observatory, also proved fascinating, connecting science and faith.”

Another multitasker is Mary K. Farrell Jensen, of the Parish of Saints John and Andrew in Binghamton. A substitute teacher for kindergarten through fifth grade in the Union-Endicott Central School District, she was commissioned for Parish Service Ministry.

She will continue helping people at Mercy House in Endicott. The home serves those who are in their last days of life. “There’s somebody with them all the time,” she said.

Mercy House has a chapel for all faiths, and Farrell Jensen brings the residents to Mass. She said: “They give you more than what you give them. … They don’t

want to be alone. … You’re grateful to be able to assist them in moving on — in my faith — to eternal life. So it’s beautiful. It really is.”

“What sustains me,” she said, “is that I have the Eucharist and a support system to rely on: Faith Formation instructors and classmates.”

It appears that meaning, purpose, and happiness all reside with her.

“And my classmates,” she said.

The Challenge of Discipleship Commissioning of Lay Ecclesial Ministers 2018