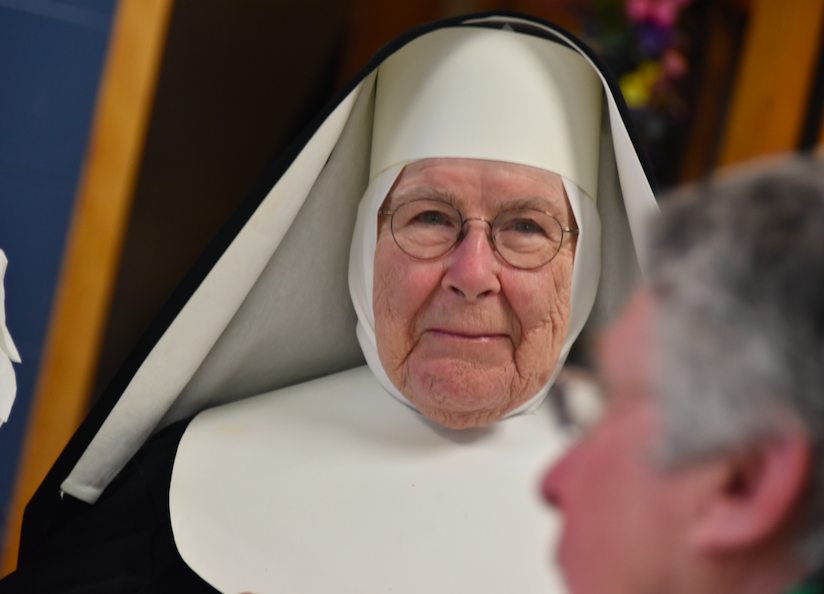 Ninety years of life, love, and faith were celebrated March 17 as St. Mary’s Parish in Baldwinsville gathered for a St. Patrick’s Day dinner in honor of Sister Mary Celestine McCann’s birthday and the announcement of a scholarship fund at St. Mary’s Academy in her name.

Sister Celestine, who turned 90 February 26 and marked 70 years as a Sister of St. Francis in 2017, spent more than half a century ministering as a teacher in schools in Hoboken and Camden, N.J.; Albany, N.Y.; at Holy Trinity School and St. Daniel School, both in Syracuse; and at St. Mary’s School in Utica. She taught a variety of elementary grade levels, but spent the majority teaching kindergarten and second grade. Sister Celestine volunteered at Stella Maris in Skaneateles for 22 summers before relocating there in 1999 and serving as a hospitality minister. Today, she resides at the St. Mary Chapel House, assisting in St. Mary’s Parish and St. Mary’s Academy as needed, and evangelizing with her fellow Franciscan Sisters and housemates Bernadette Joseph Kupris and Marcia Barry on the social media platform Instagram, under the handle @nunsense4thesoul.

Surrounded by a sold-out crowd of fellow sisters, parishioners, and well-wishers feasting on corned beef and cabbage, Sister Celestine was serenaded not once but twice: First, by St. Mary’s Academy fifth-grader Connor Radley, who sang a lovely rendition of the Beatles’ “In My Life” accompanied by teacher Dru Pellizzari on guitar. Second, by partygoers in a rousing round of “Happy Birthday.”

In remarks to the crowd, Pastor Father Cliff Auth reflected on the gift of ministering in a parish with a school. “If you look at our society today, there’s so much discontentment and a lot of anger. Pope Francis has said that Catholic school is where [young people] learn the grammar of dialogue. When I think about that and I think about the great gift of prayer, it always brings me back to Sister Celestine. She never has a coarse word; she’s always a person of faith; she’s constantly in prayer, even when she’s walking across the parking lot; and she loves.

St. Mary’s Academy has raised about $75,000 in scholarships over the past year, Father Auth noted — a scholarship fund that will now bear the name of the parish’s beloved Sister Celestine.

The fund was named in her honor, Father Auth said, because “we know that if the scholarship has your name, it will bear all those things that are a priority to you: God’s love, God’s mercy, and God’s charity.”

Sister Celestine said of naming the fund for her, “If it helps promote Catholic education and helps children get to know God a little bit better, it’s worth it.”

Turning 90 has left her feeling very grateful to God and full of fond memories of her family. It makes you realize how God has guided you, she said — through the Depression and war, “God was with us through the good times and the not-so-good times.”

Her advice for those hoping to be as full of life and light at 90? “Just put yourself in God’s loving arms,” she said. “He’ll be your guide and your help.”

“Be happy and grateful for whatever God sends to you in your life, and try to spread his love and goodness and kindness and happiness and joy.”

“And laugh a lot,” she said with a beautiful smile.