Sisters take to social to evangelize 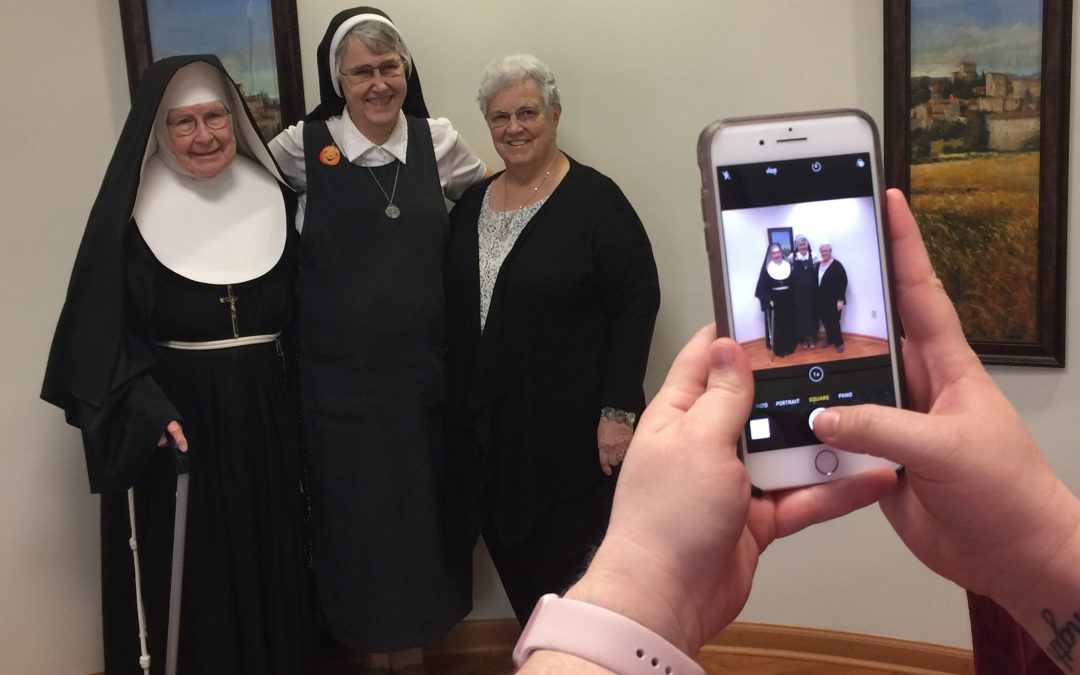 With nearly 170 years of religious life between them, Franciscan sisters Mary Celestine McCann, Bernadette Joseph Kupris, and Marcia Barry have quite a bit of collective wisdom.

But “sometimes, it’s just a lot of years,” Sister Marcia deadpanned recently, drawing gales of laughter from her fellow sisters.

The three sisters, who reside together at the chapel house at St. Mary of the Assumption Church in Baldwinsville, are putting that wisdom, those years, and that sense of humor to work in a new shared ministry: evangelizing on Instagram.

Their handle on the photo-sharing social media platform is @nunsense4thesoul. Like their posts, the name — and even the the account itself — is the product of a group effort.

“About a month ago we asked them if they would be willing to collaborate in creating their own Instagram account for the sole purpose of advancing their mission and evangelization,” St. Mary’s Pastor Father Cliff Auth told the Sun in an email. “After a lot of begging and a little bribing they said yes,” he joked.

Parish Director of Communications Joelle Zarnowski came up with the winning handle. “Father and I had thrown some names around,” she said, but when she presented @nunsense4thesoul at a meeting, all agreed, “That’s it!”

The sisters provide the pearls of wisdom and Father Auth and Zarnowski polish them for Instagram, pairing the sisters’ words with eye-catching photos. (Zarnowski jokingly likened herself to the Wizard of Oz: “Don’t pay attention to the man behind the curtain!”) Father Auth said the plan is for Zarnowski at St. Mary’s and Meg Castalini, who runs communications for the linked parish of St. Augustine’s, to share in this ministry as it unfolds.

The account launched Oct. 21 with some photos of famous faces and pun-ny captions to pique viewers’ interest. The first official post introducing the sisters came the following day. Four more posts have appeared since. One, from Sister Bernadette, pairs a photo of a nail on a cross with the words, “The toughness of the cross is polish for the soul.” That came from a parishioner, she said, who got it from his sister. Her other contributions come from her “memories and some quotes I’ve picked up that speak to me. I’m thinking, if it speaks to me, it might speak to others,” she said.

Another post, from Sister Celestine, includes the tidbit, “Two men looked out from prison bars. One saw mud, the other saw stars.” Sister Celestine said she’s gained much inspiration from her own mother, the little children she taught over the years, and the folks she now ministers to at the nursing home.

The aim of the endeavor is evangelization and connection. “When we talked about it and looked back at our lives, someone has always reached out to us, whether it be family, church, or community,” said Sister Marcia. “And if we could portray just a little bit of that wisdom and experience to those out there who might be fallen away from the Church or angry at the Church — just one little quip [could] hit them and make them want to respond.”

Sister Marcia also wants to provide a means of connection for “college kids who were very active in the parish or who have been through the school and want to know what’s going on. This last week I’ve been thinking a lot about, ‘What was it like when I was at college?’ How many kids are homesick? How many kids have something that’s happening in their family that they’re very, very worried about yet they’re at a distance? Maybe just some little words of wisdom or a scriptural quote will help them get through whatever they’re going through.”

In addition to providing spiritual insights through their posts, the sisters are also offering a look at their lives and experiences as Franciscan women religious. Their account profile photo shows them standing together: Sister Marcia wearing modern dress, Sister Bernadette wearing a veil, and Sister Celestine wearing the traditional habit. Seeing their varied dress “speaks to people about the respect for the generations,” Sister Marcia said.

Who are we? Sr. Mary Celestine McCann Sr. Bernadette Joseph Kupris Sr. Marcia Barry (Bruno-not religious but working on holiness) We are all members of the Sisters of St. Francis which means we dedicate our lives to the service of God’s mission in the Spirit of St. Francis. We live at St. Mary’s Convent in Baldwinsville, NY @stmarysbville and are part a congregation of more than 400 vowed women religious whose origin goes back to St. Francis of Assisi in the 13th century. On this occasion, World Mission Sunday, please join us as we embark on our collective journey to walk in solidarity united in God’s love for us and for one another. #nunsense4thesoul #stmarysbville #syracusediocese #worldmissionsunday #sistersofstfrancis

Followers can expect three or four posts from the sisters each week. “We’re trying to mix it up,” Zarnowski said of the forthcoming posts. “We don’t want to stay too serious all the time and we don’t want to be too funny all the time.”

She also noted that suggestions for content and questions for the sisters are welcome. Followers can comment on one of the sisters’ posts or send an email to nunsense4thesoul@gmail.com.

In the meantime, the sisters will be learning more about their newest vehicle for evangelization.

“Christ and St. Francis both went out to towns and villages to preach the gospel and to offer words of wisdom and encouragement,” Sister Marcia said. “This is one way that we can do it.”