Social justice is built into the Catholic school curriculum 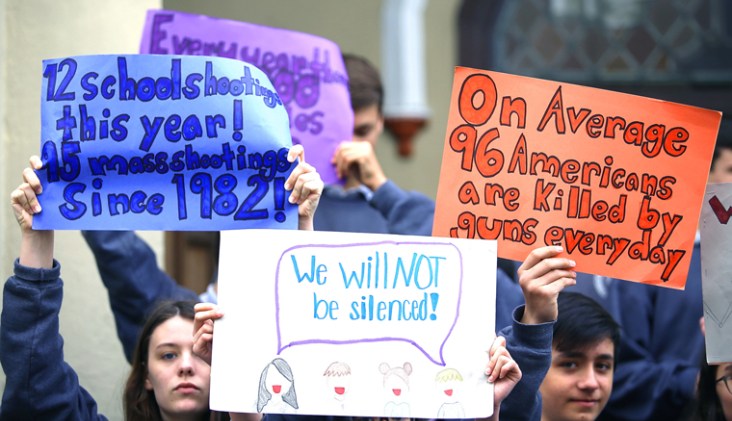 Students from St. Philip School in San Francisco were among others from Catholic schools throughout the Archdiocese of San Francisco who joined thousands across the nation in demonstrations March 14 marking the one-month anniversary of the murder of 17 people at Marjory Stoneman Douglas High School in Parkland, Florida. Some students prayed and others demonstrated in the National School Walkout, a student-led response to the tragedy. -CNS photo | Debra Greenblat, Catholic San Francisco

WASHINGTON (CNS) — At many Catholic schools, social justice might not be an assigned class, but it is part of the fabric of what they do throughout the school year from helping those in need to speaking up on social issues.

And in the past few years during various protests around the country, Catholic school students have raised their voices or called attention to issues of racism, gun violence, care for refugees or the unborn.

This past year was no exception. After the school shooting Feb. 14 at Marjory Stoneman Douglas High School in Parkland, Florida, several Catholic schools across the country sponsored awareness programs for students or provided time for prayer, reflection and action to curb gun violence during the nationwide student-sponsored event called National School Walkout. And weeks after that, Catholic school students also participated in the March for Our Lives events protesting gun violence in Washington and other locations.

Mercy High School in San Francisco observed 17 minutes of silence a month after the Florida school shooting and the student body president, Mogan Hildula, said she was confident her generation could make a difference to stop the violence.

“Despite urgent cries spanning the nation, our schools and greater communities continue to be threatened by senseless and preventable gun violence,” she said, adding that she views what is happening as a call to action.

“I believe our generation will be the ones to actually effect change in our nation’s policies regarding firearms, and I can’t wait to see what we can accomplish,” she said.

For some Catholic school students, the lack of action on the part of the nation’s leaders has been distressing.

“Gun violence is unnecessary and can be prevented,” said Sydney Meyer, a senior at Assumption High School in Louisville, Kentucky. “The fact that we haven’t acted on it is ridiculous.”

Meyer and 30 of her schoolmates spent 32 hours traveling, marching and rallying for gun control with hundreds of thousands of others who gathered in Washington for the March for Our Lives, which called for stricter gun control, including a ban on assault weapons and universal background checks. The U.S. Conference of Catholic Bishops and the Leadership Conference of Women Religious also have called for these measures. Students from Assumption said they have felt supported by the Sisters of Mercy, who sponsor their school.

Although Catholic school students spoke out en masse this year against gun violence, they typically participate each year in the March for Life in January in Washington or in Los Angeles, Atlanta, San Francisco, Las Vegas, Chicago and Tulsa, Oklahoma.

Catholic educators find mission work to be essential in hands-on lessons for students in Catholic social teaching and these trips take them to Africa, Haiti, Central America and other parts of the world where they help the poor and vulnerable.

The group woke up early each morning and attended daily Mass before heading to nearby assisted living facilities, where projects included painting, yard work and cleanup. Some attendees were assigned to a vacation Bible school to help distribute food for the needy.

This trip was sponsored by Catholic Heart Work Camp, a nonprofit organization based in Orlando, Florida. Founded in 1993, the national outreach pairs Catholic youth groups with opportunities to assist children, the elderly, the disabled and the poor.

The hands-on projects were accompanied by spiritual reflection and discussion. Students engaged in prayer before starting their tasks and shared their insights with each other during the week.

Other students have discovered that mission work doesn’t always include trips. Sometimes it’s as easy as participating in a fundraising event for a worthy cause, which is what student at St. Joseph High School in Madison, Mississippi, did when they raised more than $12,000 for their state’s only children’s hospital.

Students at two other schools in the Diocese of Jackson, Mississippi, grow food for the needy in the gardens at Annunciation School in Columbus and St. Anthony School in Madison.

Even though the students learned about agriculture and responsible environmental stewardship, they were also absorbing Catholic values, said Tricia Holder, a teacher at St. Anthony.

She said she thought the gardens “would be a great project to undertake during Lent for students to show love for others.”

She said students are often so willing to do service but they need to know the “why of what they do” and recognize the divine in who they serve.