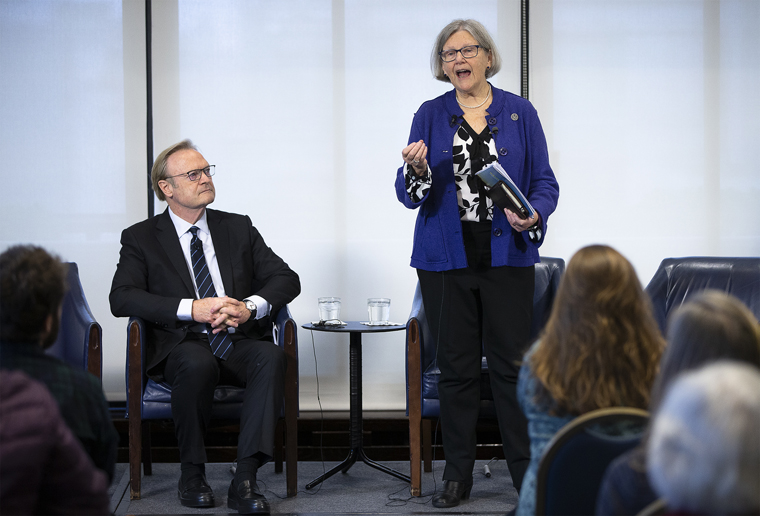 WASHINGTON (CNS) — Few people might have noticed it, but Network, a Catholic social justice lobby, conducted a series of rural roundtables in 2018 and 2019 to take the pulse of Americans living in the heartland.

The results, released at a Feb. 25 breakfast in Washington, show a series of economic, communication and social challenges that have confounded communities’ ability to fight back.

“The shifting of my awareness, and I think our awareness here at Network, is really an important piece to talk about with an equal level of respect for rural communities as we do for our urban communities,” said Sister Simone Campbell, a Sister of Social Service who is executive director of Network.

In a Feb. 21 telephone interview with Catholic News Service, Sister Campbell recalled one roundtable at a farm outside of Springfield, Illinois, maintained by the Dominican Sisters. “A couple of folks from the inner city of Springfield came with the sisters” to the roundtable, she said.

At the end of it, when participants were asked what they took away from the discussion, “one guy said, ‘You guys are talking about the same stuff we’re talking about in the center city.’ That realization of shared experience was really a treasure. It surprised the folks in rural communities as well as city folk.”

In the report, “Raising Rural Voices: Listening to the Hopes and Hardships of Rural Communities,” Sister Campbell said, “Time and time again, I heard how rural areas are trying to cope with national challenges that affect their communities in unique ways. But problems rural residents face accessing health care or other issues are not easily solved with telehealth or other ‘city answers.'”

At a roundtable in Poetry, Texas — “who knew there was a Poetry, Texas?” exclaimed Sister Campbell — residents were, surprisingly, glad the nearby hospital had closed. The quality of care there was so bad, she noted, that its last remaining physician said, “I wouldn’t send the dog of my worst enemy” there.

But they lamented the closing of the town grocery store. Poetry is 90 minutes from Dallas, and more Dallas residents are moving to Poetry to find affordable housing. But they do their grocery shopping in Dallas because the prices are better, but this is “undermining the local economy,” Sister Campbell told CNS. “They commute so far every day they have no energy left for the community.” She added roundtable participants asked, “How can we get to these newcomers? How can we include them?”

The report said, “Economic circumstances are also depressing volunteerism. In Tiffin (Ohio), surrounding towns that rely on volunteer fire departments can’t staff them because so many people need to work two jobs and don’t have time to help.”

One common lament is the lack of broadband access.

“Every place we went, there is a crisis in access to broadband, the internet, except where they have small cooperatives,” Sister Campbell told CNS. “For the big players — Comcast, Verizon — there’s not enough profit margin” to provide services.

“In Waukesha, Wisconsin, the idea of the local 25-bed hospital and nursing home not having broadband was a big deal. Nurses making visits couldn’t access patients’ files,” she added, “so the quality of care for rural America is lower.”

Moreover, “it’s hard to get professionals to move to rural communities,” she noted. One or more adults in a family may have professional jobs they can do remotely from home, “but if you don’t have broadband you can’t do that. It’s undercutting who the rural communities can recruit,” Sister Campbell said.

But agriculture — what rural America is known for — fares no better. Three roundtables “noted that agricultural facilities like slaughterhouses, meat processing plants and dairy farms are heavily dependent on undocumented immigrants for labor,” the report said, “and in Adrian (Michigan), workers who are exploited dare not speak out for fear of being deported. Many expressed their experiences of poor working conditions, meager wages and long hours.”

The roundtable sessions — 17 of them in 16 states — and the resulting report provided no policy prescriptions — yet. But Sister Campbell said in preparing testimony for a recent House hearing on child poverty, “I was able to reach out to our participants at the rural roundtable to get their input.”

Sister Campbell said participants will be asked to list their top three priorities, and Network will take those responses into account when it fashions its four-year legislative agenda following the 2020 presidential election.

Participants from four of the 17 roundtable sessions took part in the Feb. 25 breakfast session.

Kari Simpkins, who grew up on an Indiana farm and now works in animal husbandry and ecological sustainability in farming, said farming is not “corporate farming.””They have corporate ties, they may raise hogs or turkey and chickens or sell their milk in a corporate way, but it’s all just to stay on the farms they’ve inherited,” she said. “They’re older, their kids have gone to college or to town,” she added. “As farmers, we feel embattled.”

Antonio Trujillo, principal of St. Joseph Mission School, a 60-student kindergarten-through-eighth-grade school in San Fidel, New Mexico, criticized the “false narrative of how the immigrants who are here are lazy: ‘They’re just sucking our tax dollars.’ I just wish people had more personal contact around the dinner table,” he said to discover “how much they love God, how much they love their family, how they have the same values.

Trujillo said New Mexico dairy farmers said, “Oh, they’re the greatest people!” while “in the cities, where there is not that encounter, it’s ‘Oh my God, we’re being’ — and the word that I hate, is — ‘invaded.’ It’s inflammatory and it’s degradation of a people as the enemy where there are none.”

Melanie Powell, executive director of the Tutwiler Community Education Center in Mississippi — which she said was established by women religious 30 years ago — told of how access to services is key.

AT&amp;T, one of the United States’ leading broadband providers, has a building just to the left of her own building. She said she inquired about a broadband hookup and was told, “You have a beautiful setup and all this, but I can’t help you” unless the center was willing to pay $500 a month.

As for health care, “I live in the (Mississippi) Delta, but my primary care physician is two hours away,” Powell said. When she complained to her former primary care physician in the Delta about a cold, “the doctor would say, ‘Oh, it’s just the Delta Crud. You just moved here, you’re body has to adjust.’ Noooo!” In Jackson, Mississippi, she was diagnosed as having lymph nodes in her left lung.

“But it’s all about access,” she said. “I needed to see a pulmonologist. But they didn’t have that where I live.”

In the other direction, Powell added, is Memphis, Tennessee, and people will drive one hour to catch a bus — for another hour-plus ride — just to get to a part-time job there at FedEx.