Some Catholic schools focus on prayer, dialogue during April walkout 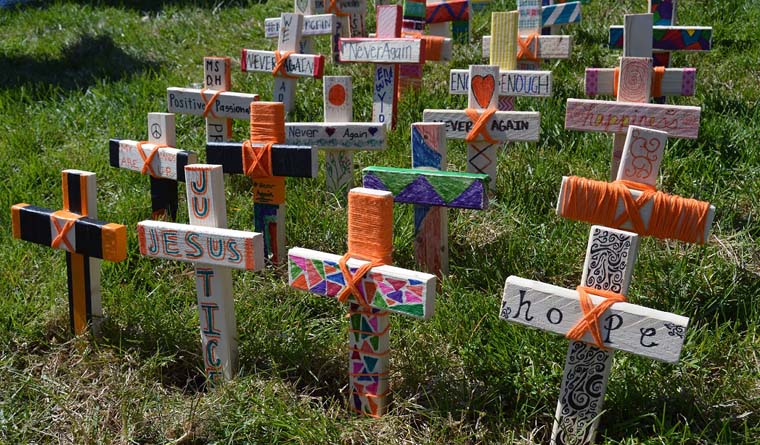 WASHINGTON (CNS) — Some Catholic schools across the country treated the National School Walkout April 20 — commemorating the 19th anniversary of the school shooting at Columbine High School in Colorado — much like how they responded to the March 14 walkout marking one month since the Parkland, Florida, school shooting: with prayer and dialogue on school grounds.

Across the country, at least 2,000 walkout events were scheduled, slated to begin at 10 a.m. in each local time zone with 13 seconds of silence to honor the 13 people — 12 students and one teacher — killed at Columbine High School.

But unlike the March walkout — scheduled for 17 minutes for the 17 who were killed in gunfire at Marjory Stoneman Douglas High School — the April 20 walkout was planned to last for the entire day with students attending local rallies, protest marches or voting registration drives during the day.

Most Catholic schools across the country had already not sanctioned the March 14 walkouts citing safety issues with students off school grounds, and instead had school Masses or prayer services to pray for recent shooting victims and their families and for an end to violence.

In general, Catholic schools were less involved in the April 20 walkout. Some diocesan schools were not marking the day at all, others were low-key in their participation, such as a 45-minute silent protest against gun violence at Ursuline Academy in St. Louis.

And many public schools also were not as lenient with allowing students to walk off campus April 20. A number of superintendents said students who left school for the day would receive an unexcused absence.

Even the principal at Stoneman Douglas in Parkland told students they would face disciplinary action if they left campus that day. Students at Columbine High School were not to be in school because classes are canceled annually on the anniversary of the 1999 shooting and students are encouraged to do community service.

Before the April 20 walkouts began, a school shooting occurred in Ocala, Florida, where a high school student was shot in the ankle. The suspect is in custody.

Plans for the day’s walkout began soon after the Parkland shootings, organized by Connecticut high school students calling for a national protest on the anniversary of Columbine shooting. The students received help from the group Indivisible, a Washington-based nonprofit group formed after the 2016 presidential election that encourages grass-roots activism.

Back when discussion began of the March and April walkouts, Catholic school superintendents were urged in an email to keep the focus on “who we are as people of faith and a community of believers.”

The email, from Dominican Sister John Mary Fleming, executive director of the Secretariat of Catholic Education of the U.S. Conference of Catholic Bishops, said Catholic schools providing alternative school walkout events were teaching their students to pray for a situation that needs a response and encouraging them to take action by writing to legislators about gun legislation.

Sister John Mary, a member of the Dominicans’ St. Cecilia Congregation in Nashville, Tennessee, also noted that “many dioceses have chosen to support student participation in this important dialogue and discussion through a clear presentation of Catholic social teaching and peaceful civic engagement.”

That was the idea behind Archbishop McNicholas High School in Cincinnati’s “Day of Reflection for Peace” April 20 that started with an outdoor prayer service and included a panel discussion on violence and opportunities to paint wooden crosses for the school property or write letters of support to victims of gun violence.

Shannon Kapp, the school’s director of communications and marketing, said the day gave students the chance to “sort out a lot of thought and emotions” and do something positive. Students were not leaving campus during the day to take part in the national event, she told Catholic News Service.

At Nazareth Academy in La Grange Park, Illinois, students gathered for prayer April 20 and then had the option of participating in break-out sessions. One session led by Congressman Daniel Lipinski, D-Illinois, focused on how to contact and best communicate with elected officials and the importance of civic engagement. Other sessions focused on how to recognize signs of people who are at risk of hurting themselves and others.

Some Catholic school students were not happy their schools were not sanctioning the walkout days.

In March, the principal at St. Francis High School in Sacramento, California, wrote to parents saying: “Like other schools and districts across the nation, we have been wrestling with the type of action we should take as a school community” to the walkout, recognizing that many students want to show solidarity and express their views but also noting there are “serious safety issues presented by students leaving campus in the middle of the school day.”

The school, like many Catholic schools March 14, held an alternative event with a prayer service for peace and healing.

A group of students started an online petition on change.org, signed by 660 people by April 20, urging school leaders to let them “walk out in April as an independent, student-led event.” They said this on-campus event would “give our students the opportunity to choose whether they would like to be represented in the walkout, and those who would prefer not to identify with the movement may elect not to be a part of it.”

Two students from Charlotte Catholic, a diocesan high school in Charlotte, North Carolina, wrote an op-ed piece April 16 in The Charlotte Observer suggesting a change in strategies for student protests of gun violence.

“With its recent emphasis on ‘walking out,’ too much of the rhetoric surrounding student activism has pitted students against not just Congress or the NRA but also school administrators,” the students wrote. “Walkouts are a form of peaceful protest, but they call attention to the issue of gun violence by defying school rules.”

The students said administrators and teachers have also been affected by school shootings as victims and protectors and should be included in public protests or activities to curb gun violence.

“Adults who work in our schools, ” the students wrote, “are not the ones who are trying to silence our voices. Our activism is meant to draw attention to the epidemic of school shootings and to call for changes that will end it. Teachers and administrators share our goal — to make schools safe.”