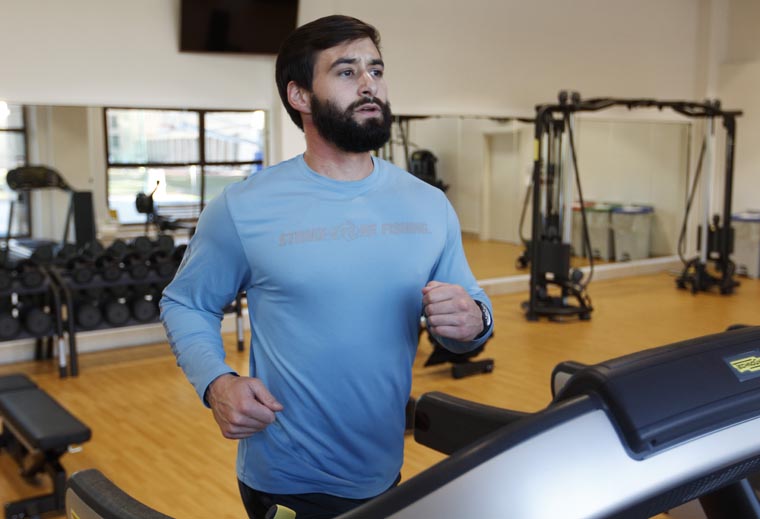 VATICAN CITY (CNS) — A seminary is not typically known for its emphasis on physical activity and fitness, but many seminarians see it as an integral part of daily life.

Andrew Auer, Joseph Caraway and his cousin, Michael Caraway, are just a few of the seminarians at the Pontifical North American College in Rome who find value in sports and physical activity.

Priests need energy to serve their people, so “we need to have bodies that are prepared for it,” said Auer, a seminarian from the Archdiocese of St. Louis. “We have our gym always available just to stay healthy to be able to serve, which is really the end goal.”

The North American College, which is sponsored by the U.S. bishops, educates students from the United States and Australia who are preparing for the priesthood.

“The Catholic Church is a real supporter of both body and soul,” said Joseph Caraway, a seminarian from the Diocese of Lake Charles in Louisiana, who did graduate studies in exercise physiology before entering the seminary. “Sometimes we can get so caught up in focusing on the soul and our prayer, which is incredibly important, but we also need to take care of our physical bodies.”

The seminary stresses the importance of building a “deeply unified community,” its website says, and one way the students achieve that is through sports.

With his experience and background in graduate school, Joseph Caraway has found some very concrete ways to help his brother seminarians, developing “diet programs and exercise programs to help them become more physically fit and just learn how to exercise correctly.”

Sports and physical activity are not simply fun and games. In fact, Vatican guidelines for priestly formation stress the importance of helping seminarians live a healthy life.

“The Gift of the Priestly Vocation,” released by the Congregation for Clergy in December 2016, says that seminarians should dedicate time to physical exercise and sports to “attain the solid physical, psycho-affective and social maturity required of a pastor.”

Michael Caraway, also a seminarian for Lake Charles, said, “Being a seminarian, being a priest, we’re all about being the best human being you can be and that’s definitely always going to involve the physical aspect as well, because if we don’t take care of ourselves, typically you’re not as happy, as healthy, holy a human being.”

Camaraderie and teamwork also are key elements in seminary life that benefit from the college’s sports offerings.

“Sports bring everybody together,” said Joseph Caraway. “I was never much of a soccer player, but you get out on the field and your brothers are there to help you out. You’re struggling, you don’t know how to play, but they’re there to teach you and help you grow.”

The college has a large turf field, which is home to Ultimate Frisbee, soccer, football and softball matches. Just beside it sits a basketball court, which is directly in front of the state-of-the-art gymnasium inaugurated in the spring.

“It’s been a really great resource for guys to come together as a community and to exercise their bodies and really prepare for the days ahead,” Auer said about the new gym.

Offering the seminarians so many opportunities to play the sports they grew up with also can help them feel at home as they adjust to student life in a foreign land.

Events such as the Spaghetti Bowl, which is held every year at Thanksgiving time, give the men a renewed sense of the familiar after being thrust into the unfamiliar culture of Rome.

“The Spaghetti Bowl is a long-standing tradition at the North American College,” said Auer. “It’s a big culminating event on Thanksgiving weekend that we do to bring everybody together, especially when it’s the first holiday away from home” for first-year students. “It can be one of those things to focus on the community here and not so much on what you’re missing at home.”

The Spaghetti Bowl is a flag football game between the first-year men and the rest of the college, and serves to help integrate students into the daily life of the seminary, Michael Caraway said.

“I got to know so many of my classmates and brothers in the house so much better because I was out there working with them,” training for the game, he said. “It’s just a good, natural way to get to know some of the guys and build community.”

A balanced sports life at the seminary also shows there are greater values at play, values that go beyond childhood dreams of a professional all-star career and money.

“You reach a certain age when you’re not going pro, and you realize there’s something more than just the game that’s being played,” Auer said. Amateur sports provide “a place where I can go and grow in friendship and virtue with encouragement and support from my brothers.”