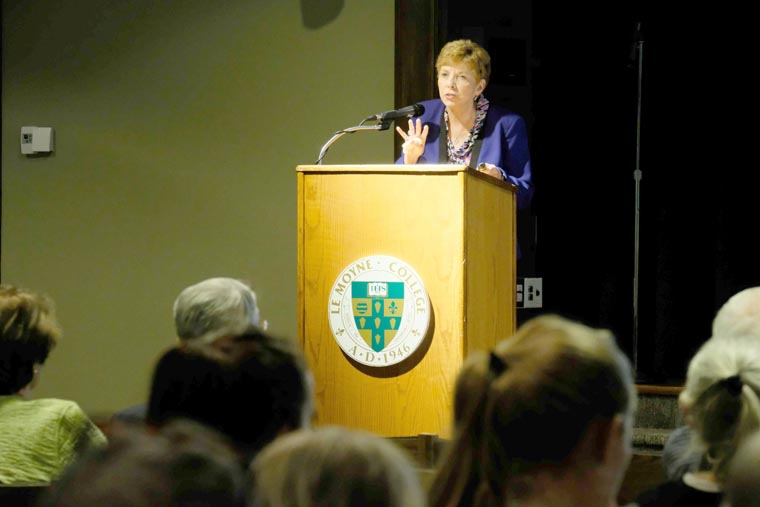 When Dr. Marie T. Hilliard took the stage Sept. 22 at Le Moyne College, she said some of the audience might have noticed her checking her cell phone a few moments earlier.

As director of bioethics and public policy at the National Catholic Bioethics Center in Philadelphia, Dr. Hilliard helps staff the 24-hour line taking calls from health-care professionals across the country who are facing issues of conscience. Their concerns might involve end-of-life care, crisis pregnancy, or fertility issues.

“We’re charged as lay folks to live in the world and try to make it holy,” said Dr. Hilliard, who is a registered nurse and canon lawyer. “It’s not easy.”

Dr. Hilliard spoke to about 90 members of the public, clergy, and student body about “Infringement on the Exercise of Conscience in the Public Square.” The presentation was co-sponsored by the college and the Order of Malta, of which Dr. Hilliard is a member.

Malta was founded during the Crusades to defend the faith and serve the sick and poor. It remains active internationally and, in the United States, operates mobile clinics providing free health care to people who can’t afford it.

In her capacity with the Bioethics Center, Dr. Hilliard encounters people of faith who face moral obstacles while trying to serve the sick. Students worry about being required to work on material in the lab that came from aborted fetuses; should they continue their studies? “We tell them you have to be in health care, you have to be out there,” Dr. Hilliard said.

Nurses call because they’re told they must help perform an abortion or be fired.

“They’re really put under the gun because they’re being told they have to do something that they know violates natural and moral laws,” Dr. Hilliard said.

She cited several cases, including one at Mount Sinai Hospital in New York City in which a frightened nurse cooperated in an abortion against her will. It took four years for the hospital to be disciplined, Dr. Hilliard said.

Dr. Hilliard works to change policy. For example, the American Medical Association says pharmacists must fill every legally valid prescription or provide an immediate referral to an alternate dispensing pharmacy. That includes prescriptions for the morning-after pill. She compared such policies to asking someone to hire a hit man.

Employers are penalized if they refuse to provide abortion and birth-control coverage in their health-care plans. “We’re in court over and over again to defend our religious liberty,” she said. And so far, the faithful aren’t winning, Dr. Hilliard said.

A lawyer in the audience noted that the conscience exception has never been a strong legal argument and suggested that unions might be more likely to gain protections under collective bargaining.

Other audience members worried that bigots would say they were exercising their conscience. Some also asked about such incidences in which courts have ruled bakeries were discriminating against gay couples for refusing to bake a wedding cake.

Her talk generated conversation at a reception that followed.

Some students who attended the talk had a different reaction. Nicole Mongeon, a sophomore at Le Moyne, came because she is taking a philosophy class. She found she disagreed with much of what Dr. Hilliard said. “What about other religions?” she asked.

“It was an eye-opening presentation,” said Megan Fitzgerald, who is a pediatric nurse at Elmcrest Children’s Center in Syracuse. “This was definitely helpful. … I want to learn more.”

Sometimes teenagers at the center want birth control, she said. As a Catholic and a member of the Order of Malta in Syracuse, she lets someone else handle those situations.