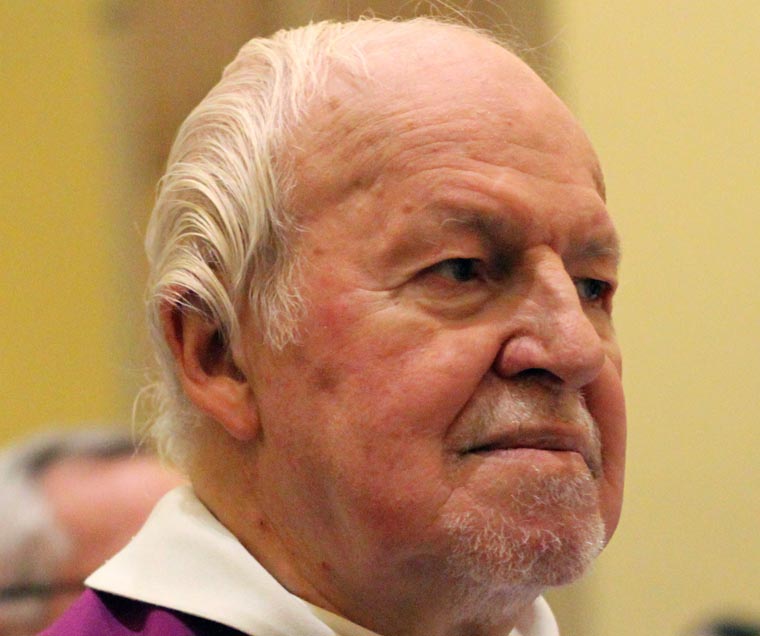 QUEBEC CITY (CNS) — It took three centuries, but the writings of Canada’s first bishop are now available in English.
The book, “The Spiritual Writings of Francois de Laval,” responds to an Anglophone demand that now exceeds French demand for writings by the man who was canonized by Pope Francis in 2014.

Jean Duval, director of the Francois-de-Laval Animation Center, has observed this increasing interest for a number of years, based on the requests he receives and the written prayers left at the Notre-Dame Cathedral Basilica in Quebec City, where the center is located.

“It’s a tourist request, because more Anglophones come to the cathedral, including many Americans,” he said.
When the Diocese of Quebec was erected in 1674, Francois de Laval became its first bishop. The diocese included every French and unexplored territory in North America, with the exception of the English and Spanish colonies.

The center already had a biography of Bishop de Laval in English, but Jean Duval also wanted to give people the opportunity to get in touch with the saint’s thought and his time. With the Quebec Seminary, he developed the project to translate Msgr. Hermann Giguere’s 2011 book about St. Francois de Laval’s spiritual writings. It offers a selection 39 texts that illustrate the spiritual experience of the first Canadian bishop.

“We are pleased with this international openness,” said Msgr. Giguere, who says English is today’s “lingua franca.”

“I have worked on this selection of texts knowing that, with a canonization, the pope extends the devotion and the veneration of this person to the whole church,” he said.

He said that, as he reread the book, he was struck by things applicable today.

St. Francois de Laval “was very strong on the mobility of priests and saw them as missionaries. He did not want to make fixed parishes. It seems interesting to me today, this idea of a model of priest who goes where the needs are, motivated by the service of the communities that people create,” said Msgr. Giguere.

“His idea was to really create here a church closer to its evangelical roots. He was very critical of what was happening in France in the 17th century: the benefits, the bishoprics that were exchanged and bought. He was part of a group — there was Francis de Sales before him — who wanted to do something new to get rid of this heaviness in the church. Francois de Laval was an evangelizer close to the people who was mindful of continuity. I think it’s an important legacy he gave us,” he added.

But no matter how his ideas remain relevant today, translating his work is a complex operation that requires a good understanding of the written 17th-century French, of the history of New France and of classical English, so as to be able to render for English readers the style of these writings.
Msgr. Giguere turned to someone not far from the tomb of the saint in Old Quebec: the organist of the Holy Trinity Anglican Cathedral. Born in England, Benjamin Waterhouse is a professional translator who knows how to make this bridge between centuries and languages.

“I had to understand the meaning of the original text before being able to translate it,” he said. “To do this, I had to understand the world in which he lived and his complexity, to immerse myself into the history of Canada and New France, and read spiritual texts written at the same time. It’s more complicated than we normally do. Three-and-a-half centuries apart, it was a world of spirituality that I did not know much about.”

He said he is not surprised that St. Francois de Laval’s writings had never been translated before. “Without taking up the cliche of the two solitudes, there has always been a separation between French and English life,” he said.

Waterhouse said he was struck by the “clairvoyance” of the first bishop of Quebec and by “his way of preparing the future”: to think of building a cathedral, a seminary, and establishing parishes on such a vast territory.

The book is also expected to be available in digital format in June. A Spanish-language version is not expected at this time.