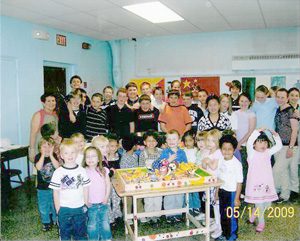 CORTLAND — Candy sales and bake sales are a part of Catholic school tradition — great for raising money, not so great for watching waistlines.

St. Mary’s school in Cortland is trying to start some new, healthier traditions for its students and faculty.

The school has implemented a number of programs and earned some grants to encourage students and their families to get moving and start making healthy lifestyle choices.

A Wellness Committee, made up of parents and teachers, meets regularly and has coordinated immunization clinics, hygiene talks and a lunchtime fruit cart that has proved surprisingly popular.

The cart, built by one of the school’s parents at his own cost, displays different types of fruits the children can choose from during lunchtime once a week. “We got rid of the ice cream on those days and we found that the kids didn’t even notice,” said Cathy Peterson, a second grade teacher’s aid and a member of the Wellness Committee. “It didn’t take much to persuade them.”

Depending on the season, the cart displays fruits like strawberries, apples, oranges and even more exotic fruits like papaya and kiwi fruits.

A grant the school earned last year funded the cart for the entire school year. When the grant money ran out, members of the St. Mary’s School community chipped in themselves. Now the cart, which costs around $80 each day it appears, is sponsored by parents, teachers, local businesses, the hospital or principal Mary McInvale.

“It’s a great way to keep it going,” Peterson said. “And the more donations that we get, we can add more days. Right now we’re almost funded through the year, so if that happens we can put in more days during the week.”

Now Peterson said the school is competing for a “veggie grant,” too.

The Wellness Committee will also be handing out a wellness Bingo sheet to students within the next few weeks. Rather than the normal Bingo sheet, though, this sheet will have different physical fitness options like going to the free swim night at the local YMCA or making a snowman. When students complete one of the activities, they have a parent sign off the letter that corresponds to the activity. When they get all the letters that make up “bingo,” they earn a prize.

“It’s just another way for us to say, ‘Get out there and do something,’” said P.E. teacher Sean Mack.

St. Mary’s earned a Physical Education Program grant that will bring almost $8,000 in new equipment to the school. The grant brings a new “recess kit” each year for three years.

Last year, the first for the grant, the kit included big bags filled with sports equipment like basketballs, soccer balls and jump ropes. Each grade has two of their own bags, and each grade’s bag is a different color so the students always have their own equipment. “So it also promotes responsibility in taking care of their own stuff,” Mack said.

This year, the grant will bring a state-of-the art projector and the popular Wii video game system in which participants’ movements are reflected by characters on the screen. It will come with a “Dance Revolution” game, and Mack said he is going to incorporate a new dance unit in the curriculum.

The new Wii game should arrive within the next week or so. “But I’m not going to tell [the students] until it’s here,” Mack said, laughing. “Otherwise they’d be asking me about it all the time.”

He said he plans to set up a reward system where students will get extra time to use the Wii if they meet certain fitness goals.

Mack has also set up a monthly Run Club where students aim for continual movement for a set number of minutes. Kindergarteners are asked to move for six minutes, second graders for 10 minutes and so on up to the sixth graders, who aim for 20 minutes. Those who are able to run for the entire time get a sticker and have their name written up on a board.

“The goal is continual movement, the goal isn’t just to make the Run Club,” Mack said. “They do want their name up there, though, so it also helps me teach them about pacing themselves and trying harder the next time.”

Mack also coordinates a P.E. Fun Night where students bring in their parents and family members to play some of the students’ favorite games. Older students can compete against their parents in games. “It kind of gets a little crazy in here,” he said.

The Wellness Committee is currently organizing a 5k fundraiser run in the spring. Scheduled for June 5, the event is being called the “H.A.E. Day 5K,” with the acronym standing for Health, Arts and Education.

“It’s going to be comprehensive,” said Peterson. There will be demonstrations on swim safety, bike safety and correct car seat installation, wellness booths, information on dental health and the Cortland Police Department will be available to take fingerprints. There will also be a breakfast and shorter-distance fun runs available. Peterson said the committee is hoping to encourage local vendors and corporate sponsors to participate.

“It’s a great community thing because it does bring a lot of people from the community together,” Peterson said, “and it’s a great family event, too, because it’s an afternoon of fun and it’s something the family can do together.”