St. Stephen’s annual Polish festival is a recipe for heritage and community 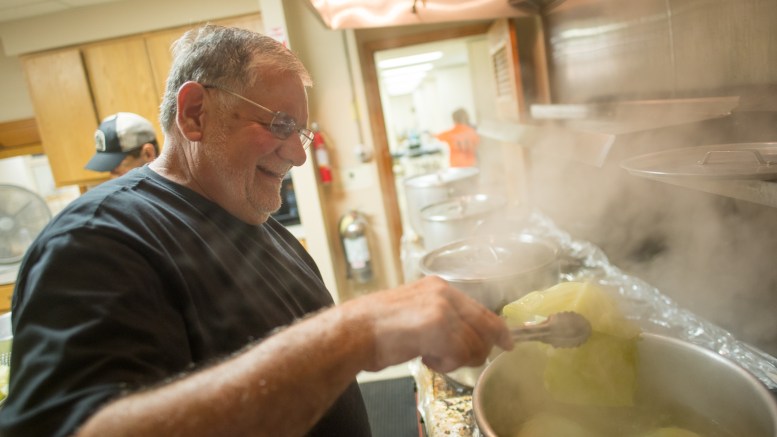 A handful of volunteers had their hands full of cabbage August 8 as parishioners of St. Stephen’s Parish in Oswego prepared for Sunday’s annual festival.

A tradition parishioners say dates back to about the 1930s, the festival celebrates the parish’s Polish roots and community through homemade Polish fare, fellowship, and a lot of fun. The festival also serves as a crucial fundraiser for the parish; it netted just shy of $24,000 last year. 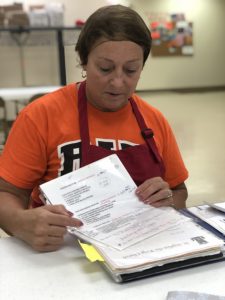 Therese Chawgo is the chair of this year’s festivities, coordinating both the “upstairs” entertainment and the “downstairs” kitchen operations. A native of the parish, she has been involved in festival efforts since she was a young child. This year’s festival is particularly meaningful, as St. Stephen’s and three other Oswego parishes work toward joining together as one faith community.

“It’s always been in my family to do this,” Chawgo said, watching with gratitude the volunteers hard at work. “It’s my church. I was born and raised here. I’m not going to let [this tradition] die.” 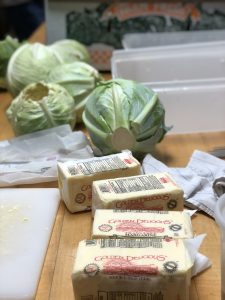 That morning volunteers were preparing cabbage leaves for golabki, a classic Polish dish of ground meat and rice wrapped in cabbage. In the church’s basement kitchen, cardboard boxes held cored cabbages bound for one of the four bubbling stockpots on the stove. Individual boiled leaves cooled in ice baths before being brought to volunteers at the long table outside the kitchen. There, skilled hands trimmed down the leaves’ thick center ribs and laid them on trays to be refrigerated. In the coming days, volunteers would fill the leaves with the parish’s traditional recipe of ground beef and pork, rice, onions, and spices, and cook them in roasting pans filled with cabbage, butter, and a tomato juice mixture.

Chawgo said the goal was to make 1,700 more golabki before the festival —  in addition to the 1,300 tasty bundles already in the freezer. Those 3,000 golabki would be overshadowed only slightly by the 16,000 pierogi volunteers finished and froze over the course of four weeks beginning in late June. (Festival chefs know their audience: 7,000 pierogi are potato-and-cheese-filled; 6,000 just cheese; and 3,000 cabbage). Chawgo said pre-orders of the delicious dishes had been flooding in — one man requested 18 dozen pierogi — and volunteers would start packaging the orders at 6 a.m. on Sunday. The rest would be available to the line of anxious customers to eat on-site during the festival. All the food, Chawgo said, would likely be sold out within three hours. 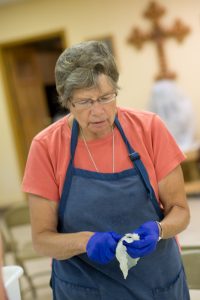 Among the golabki chefs that morning were Judy Coniski and her granddaughter, nearly-11-year-old Joscelyn. Joscelyn is a fifth-generation golabki-maker, Judy noted proudly, as her great-great-grandfather was a founding member of St. Stephen’s.

Judy, who married into the St. Stephen’s family (she is a native of Sacred Heart Basilica in Syracuse, another parish with a proud Polish heritage), estimates she’s been involved in the festival prep for about 30 years. In that time, the volunteers — once exclusively the elder women of the parish — have learned how to work smarter and not harder, she said, and how to mechanize some of the steps.

“The thing that has meant an awful lot is that a new generation has stepped up,” Coniski said. “We’ve had my generation, my mother-in-law’s generation, and then we’ve had a step-up from the younger generation, like Therese. And then bringing along the even younger ones,” she said, smiling at Joscelyn. 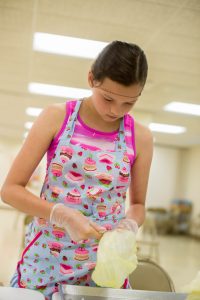 For her part, Joscelyn said she loves to help with the festival food preparation because “I really like to cook… I like to be around the kitchen” and she’s been helping with cooking and baking since she was just one-and-a-half.

Andy Shaver, 10, and sister Madeleine, who will be 9 on Monday, stepped into the cabbage prep line as well. Mom Jill said she and the kids were there there because “I love St. Stephen’s and I love helping out and I know it takes a lot of work and a lot of hours and manpower to get this done. You see all the [fruit] of your hard work when people pour in on Sunday and all the food sells out. I like being part of that.”

Chawgo, who works fulltime as an operating room nurse, said she would not be able to make the festival a success without the tireless work of the volunteers. “We laugh, we joke, we eat lunch together — it’s a family. It’s amazing,” she said. 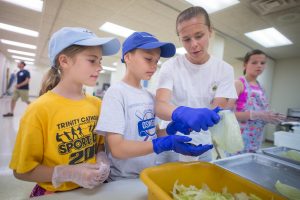 St. Stephen’s annual festival will be held Sunday, August 12, on the parish grounds, 140 Niagara St., Oswego, from 12 to 7 p.m. Polish specialties for sale will include golabki, pierogi, kapusta, and kielbasa; hot dogs, hamburgers, soda, beer, coffee, and desserts will also be available. Booths will feature cake, groceries, “critters,” gift baskets, and a wheel of fortune. Entertainment will include children’s games, raffles, and music: Bob Hageny will perform 12 to 2 p.m. and Fritz’s Polka Band will perform 2 to 6 p.m. Polish food can be pre-ordered by calling Therese Chawgo at 315-532-4906.