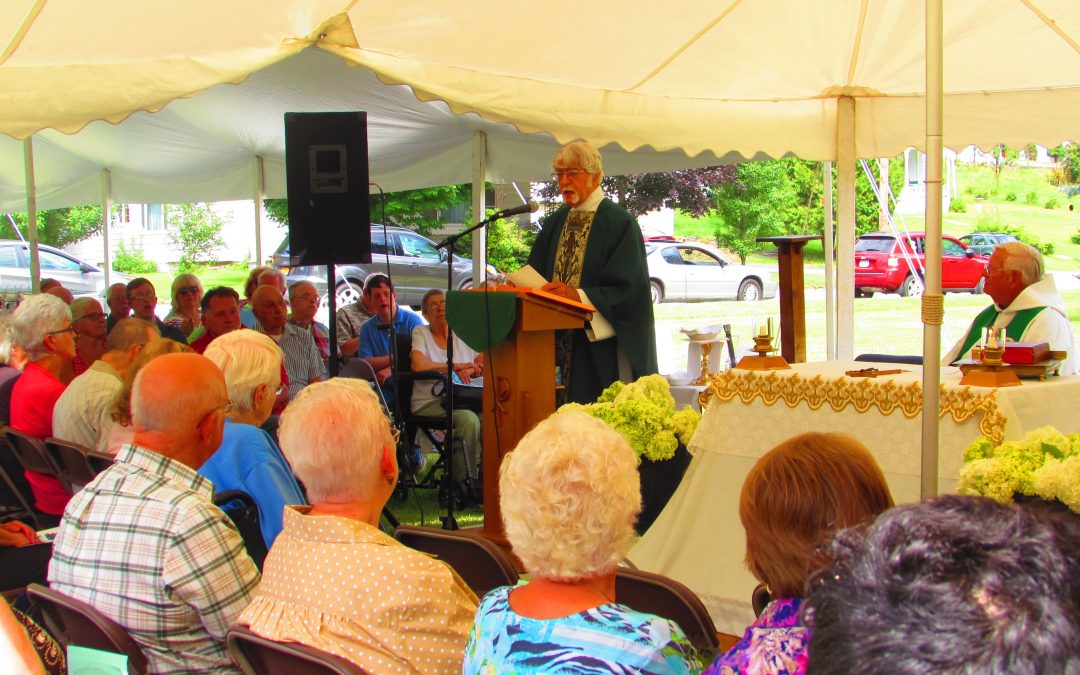 NEW BERLIN — About 60 miles outside of Syracuse, in the small town of New Berlin, lies St. Theresa’s Church, a 60-year-old parish that has battled through the highs and the lows to “keep the faith.”

On July 24, nearly 200 parishioners processed down the streets of New Berlin, following four young men who carried the statue of St. Theresa.

In celebration of their diamond anniversary, the congregation sang together, prayed together, shared an outdoor Mass and luncheon, and were surprised with a special guest: the last surviving parishioner of St. Theresa’s founding members.

“We got going by chance,” Martha Fleury said, reflecting on the founding of the parish. “We moved to New Berlin, and there was no church. There was a Catholic here, a Catholic there, but no church.”

Catholics often had to travel up to 45 minutes just to attend Sunday Mass, according to Pastoral Coordinator Pat Houghton, and the town was in desperate need of a place to worship. That’s when “the Lord provided,” Fleury said.

“By accident, I got wind of a church building being available…,” Fleury said. “This fell in place without any real planning. We had talked about how many Catholics we had, and I had gotten together some sheets for Bishop Foery about how many families we had and how many children there were, but nothing was really official yet.”

Despite the “unexpected blessing” of a building becoming available for purchase, St. Theresa’s early founding members were ready and willing to give everything they had, according to Fleury.

“We bought the building, as it was, for $4,200,” she said. “It had old theater seats in it, and the whole place was dilapidated. There were even dirt floors in the cellar, and nothing down there at all. But everybody got up and said ‘I’ll give $100! I’ll give $100!’ and that’s where we got the money. It just came together.”

On May 5, 1956, the Diocese of Syracuse received the property by deed.

Houghton, who has also been with the church since its inception, remembers attending the first Masses while she was still in kindergarten. She said the parishioners rallied around St. Theresa’s by making visits to the bishop, pitching in funds wherever they were needed, and helping to find pieces that could populate the small worship space.

“When we were first setting up the church, we had a lot of equipment that was borrowed from others,” Houghton said. “Our pews were from a church in Utica, the statue of St. Anthony came from Mount Vernon, and that’s how it was.”

Situated in between the town court and a consignment shop, with 18 pews and a narrow center aisle, the parish’s greatest problem today, according to Houghton, is more blessing than burden: they have so many active parishioners that they’re in need of more space to worship.

“We desperately need to build a church, a new church,” Father Lester Smith, St. Theresa’s administrator for the past eight years, said. “These people are so faith-filled, and it is such a service-oriented parish. They are enthusiastic about working with other Christians in the greater New Berlin area. The music, the singing, the participation, the loving community — that’s St. Theresa’s.”

From the elementary school children who prepared a song to sing at the anniversary Mass, to the many people who arrived early and stayed late to tend to the tent, to the New Berlin community members driving by and congratulating the parishioners on their parish’s anniversary, it is evident that St. Theresa’s, though small, has had a large impact over the past 60 years.

The church has an active choir, a very involved “helping hands” community outreach program, and an up-and-coming youth population who were an integral part of the anniversary celebration, according to Houghton.

“I’ve gone to this church all my life,” college sophomore Rebecca Johnson said. “We’re just one, big, family community. We have a helping hands program here, but we also are the helping hands that are everywhere in New Berlin. I think it’s beautiful.”

Houghton attributes the strength of the congregation to its members’ willingness to truly live out Jesus’ message of selfless service.

“Our Confirmation class does take-out lasagna dinner for Superbowl Sunday, our choir sings carols at Christmas time, and it’s just a very active liturgy community,” Houghton said. “We also have a fine business manager and a really great finance committee that have always been able to keep us financially stable.”

Houghton says, however, the parish’s most well-known group are those involved in the Helping Hands program.

“We gather our parishioners and others from the village that go out to those who cannot handle their landscaping,” she said. “We also do things like send birthday cards or inspirational cards to those who cannot get to church and to those that are sick and so forth. It’s quite a sizeable ministry here.”

St. Theresa’s humble dwelling boasts a congregation of great faith and great loyalty to a parish that has stood firm for 60 years, as Father Smith summed up for the congregation in his homily during the anniversary Mass: “Ultimately, today we are celebrating God’s faith — faith in the founders, and faith in us.”

Samantha Pallini is a native of Green Bay, Wis., and a student in the Syracuse University College of Law.

See photos of the celebration below. All photos for the Sun by Samantha Pallini.