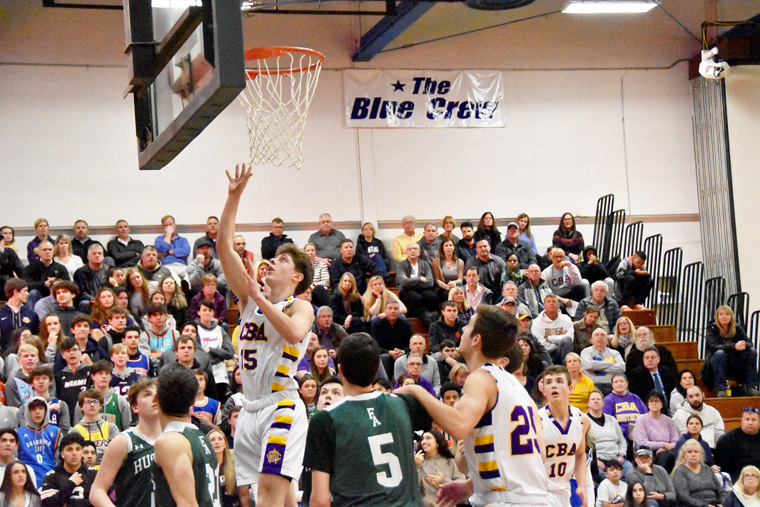 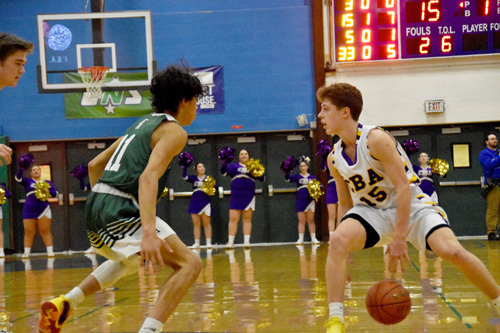 Caution regarding the coronavirus has interrupted the playoffs for high school athletes.

The NYSPHSAA statement said: “It is certainly understood that postponing the remaining winter state championships is disappointing, however the opportunity to participate in a NYSPHSAA championship event does not outweigh our responsibility and obligation to ensure students participate in a healthy and safe environment.”

On March 16, NYSPHSAA Director of Communications Chris Watson said in a phone interview that the association was “certainly hopeful” and optimistic about resuming the winter championships at a later date. He said the postponement was based on the governor’s office and the national Centers for Disease Control and Prevention.

Watson called postponement a “better alternative than canceling at this time.” He said the association was waiting to see what happens in days or weeks regarding the coronavirus.

Rebooking sites for playoff games, he said, would require “a lot of moving pieces” and a lot of coordination. 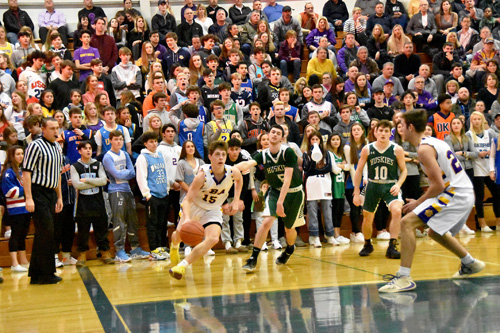 Christian Brothers Academy sophomore Dan Anderson (15) appears to be everywhere in the Brothers’ 68-40 victory over the Franklin Academy Huskies in the state subregional game on March 11 at Cicero-North Syracuse. Anderson, the game’s top scorer, drove to the basket and shot from outside while totaling 20 points. He also had eight rebounds, six assists, and five steals. (Sun photos | Tom Maguire)

AD Wleklinski, who is also CBA’s boys basketball coach, called the NYSPHSAA’s move “a very informed and correct decision.” His hoop team, which has 13 players including six seniors, has won 13 games in a row. 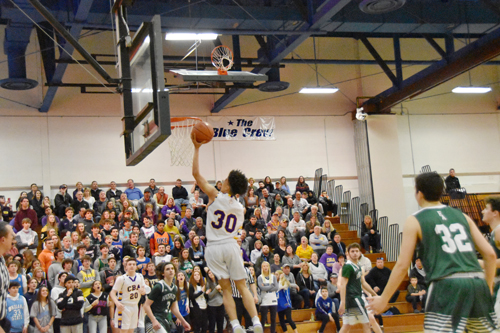 The CBA girls basketball team had defeated Jamesville-DeWitt 45-42 to win the Section III Class A title. Then the CBA girls had a bye in the state subregionals, and they were supposed to play Averill Park on March 14 in the regional.

“It was just a great year,” said CBA girls basketball Coach John Niland. The four seniors among the 10 players on the team had started even as freshmen, he said.

“You play sports to learn how to win and learn how to handle disappointment,” he said. “Things happen you don’t control and you have to deal with them.”

He found out about the indefinite postponement about five minutes before he went to a team practice last week. “I think that’s the No. 1 priority, to keep people safe,” he said. He added: “The life lesson here is that that’s life.”

‘Best night of my life’ 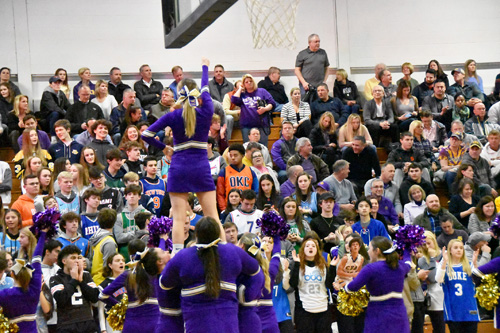 Just as the CBA girls did, the CBA boys won the Section III Class A title by beating Jamesville-DeWitt.

“The best night of my life,” CBA senior forward Chris Catalano said of that 63-61 victory over J-D. “It was exciting.” He noted that the site of the game, the Onondaga Community College gym, “was packed that night and the student section ran out there and they were all cheering.”

Then, on March 11, the CBA boys defeated the Franklin Academy Huskies, of Malone, 68-40 in a state subregional game at Cicero-North Syracuse.

“This is a good night,” Catalano said after the game. “I’m happy to be going forward and extending my season as long as I can.”

The Brothers outshot the Huskies 44.3 percent to 26 percent and outrebounded them 45-32. 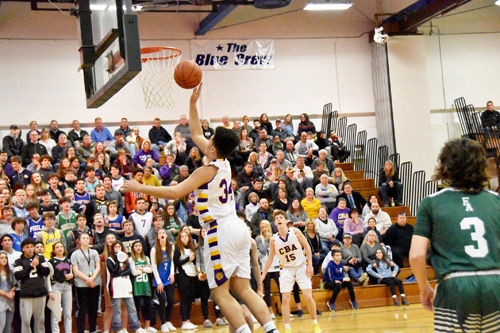 CBA junior Kamren Harris makes a layup for a 59-30 lead in the fourth quarter against the Franklin Academy Huskies. (Sun photos | Tom Maguire)

In six minutes of play, 6 foot 4 inch Brothers junior Kamren Harris grabbed three rebounds and shot 2-for-3 from the field. “You were around the rim all the time over there,” Coach Wleklinski told him, “just don’t hurt yourself. Nice job, nice job.”

CBA totaled 15 steals and seven blocked shots, although the coach does not encourage his team to go for blocks.

Because a lot of teams that CBA plays are bigger than the Brothers, “when we try to block shots it usually just ends up in fouls,” Catalano explained.

But against Franklin, the Brothers had a size advantage. Franklin nevertheless proved quite tough in the first quarter despite a 15-20 deficit when it ended. And CBA made six turnovers in the first half, which is unusual, Coach Wleklinski said.

“They gave us all we could handle throughout the whole game,” he said. “They made it tough for us to get into our offensive sets. … Their pressure was really pretty good. That’s as good as we’ve seen in a long time.”

But the coach noted that CBA junior Sam Haas hit a couple of big shots and sophomore Dan Anderson controlled the ball well. “How about the steals that he made in the second half when they made a run,” Coach Wleklinski said of Anderson.

Also, he said, “our bigger guys can play … good defense and I thought they did.” 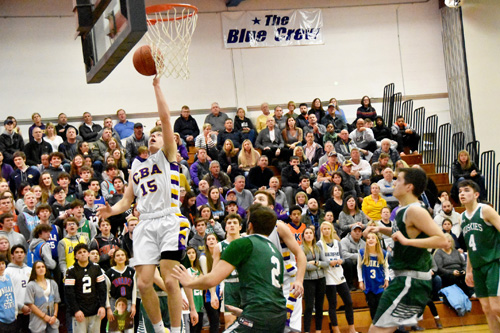 Christian Brothers Academy sophomore Dan Anderson (15) appears to be everywhere in the Brothers’ 68-40 victory over the Franklin Academy Huskies in the state subregional game on March 11 at Cicero-North Syracuse. Anderson, the game’s top scorer, drove to the basket and shot from outside while totaling 20 points. He also had eight rebounds, six assists, and five steals. (Sun photos | Tom Maguire)

He added: “We’ve got a lot of guys that can shoot it [if] they’re left open, and we’re fortunate that Haas got hot early, [senior Colin] Kelly hit a couple, and Danny is just Danny.”

“We knew they played super hard,” Anderson said of Franklin Academy. “They grind it out on defense. … So, we came out a little slow, but at halftime we just knew that we had to stay calm and that’s what we did, and we were able to get some baskets.”

Haas credited CBA’s good defense and backdoor plays. Also helping was his 5-of-9 shooting from the field, including 3-of-7 from 3-point range. “I just practice it a lot,” he said.

In the beginning of the season, Catalano said, the Brothers were trying to run with teams but it wasn’t working, so they slowed things down. “And we really locked in defensively,” he said. “That’s been a big part for us.”

Against Franklin Academy, he said, CBA started in a 2-2-1 press, switched to a 2-3, and finally went to man-to-man coverage.

At the end of the game, Coach Wleklinski noted, CBA senior R.J. Romeo made two great backdoor passes. “We take whatever’s there,” the coach said.

The team gathered after the game and said a Hail Mary.

If the playoffs resume, CBA will play Mekeel Christian Academy, of Schenectady, in the state regional game, with a chance to go to the state Final Four.

“They’re a great team,” the Brothers’ Anderson said, “but every team that we pla