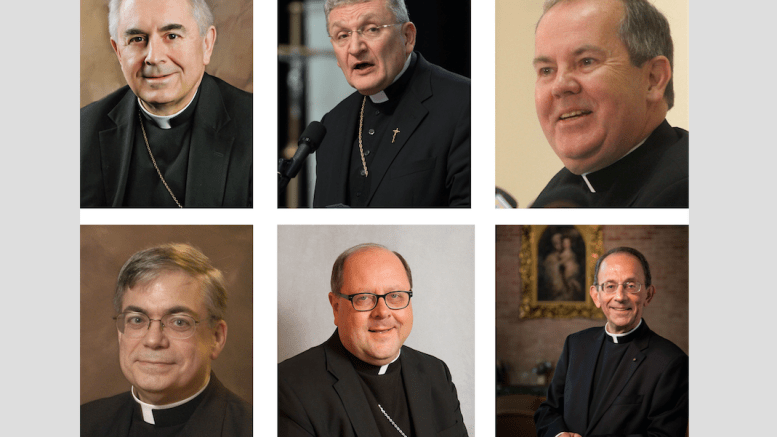 WASHINGTON (CNS) — The following are excerpts of statements, and links to the full statements, made by the bishops of the six Pennsylvania dioceses named in a grand jury report released Aug. 14 that detailed a two-year investigation of seven decades of clergy sex abuse claims. Many of the claims date back decades.

Pennsylvania officials say 301 priests were linked to sex abuse claims and more than 1,000 victims were identified by the grand jury investigation.

The bishops’ statements were made on the day the report was released.

From Bishop David A. Zubik of Pittsburgh:

“It is difficult to stand here before you today. Yet, I wouldn’t want to be, I couldn’t be, any other place than with you at this moment. The women and men of the Grand Jury have spoken. They have spoken for victims. To those women and men and all those they have spoken for: We hear you. The church hears you. I hear you. … We cannot bury our heads in the sand. There were instances in the past, as outlined in this report, when the church acted in ways that did not respond effectively to victims.

“Swift and firm responses to allegations should have started long before they did. For that I express profound regret. At the same time, I express gratitude to survivors who have taught us to respond with compassion to those who are wounded and with determination to remove offenders from ministry. To apologize and express sorrow for the past is an important step. But it is not enough. Continued action is necessary.”

Bishop Zubik’s full statement can be found here. The Diocese of Pittsburgh’s response to the grand jury report is here and a chart on abuse claims is here.

From Bishop Ronald W. Gainer of Harrisburg:
“I read the grand jury report on child sexual abuse with great sadness, for once again we read that innocent children were the victims of horrific acts committed against them. I am saddened because I know that behind every story is a child precious in God’s sight; a child who has been wounded by the sins of those who should have known better. … In my own name, and in the name of the diocesan Church of Harrisburg, I express our profound sorrow and apologize to the survivors of child sex abuse, the Catholic faithful and the general public for the abuses that took place and for those church officials who failed to protect children.

“We will continue to make amends for the sins of our past, and offer prayers and support to all victims of these actions. We are committed to continuing and enhancing the positive changes made, to ensure these types of atrocities never occur again. Since the turn of the century, the church has instituted policies that take clear and decisive action to prevent future abuse.”

Bishop Gainer’s full statement can be found here. He also referred to the diocese’s release Aug. 1 (and updated Aug. 6) of a list of 72 clergy, both dead and alive, accused of abuse. The diocese has other documents on its new Youth Protection blog.

“As I stressed last week when we released information regarding our own internal review of child sexual abuse in the Harrisburg Diocese,” Bishop Gainer said Aug. 14, “I acknowledge the sinfulness of those who have harmed these survivors, as well as the action and inaction of those in church leadership who failed to respond appropriately.”

From Bishop Alfred A. Schlert of Allentown:

“As your bishop, I am deeply saddened by these incidents. I sincerely apologize for the past sins and crimes committed by some members of the clergy. I apologize to the survivors of abuse and their loved ones. For the times when those in the church did not live up to Christ’s call to holiness, and did not do what needed to be done, I apologize.

“I also apologize to you, the faithful of the diocese, for the toll this issue has taken over the years: the sadness, the anger, the doubts, and the embarrassment it may have brought you as a Catholic. I ask for your forgiveness, and I thank you for your perseverance and for your courageous witness to our faith. I want to assure you that as a church, we will learn from the report of the grand jury and use it to further improve our protections for children and young people.”

“Many of you are aware of the statewide grand jury investigation into child sexual abuse within the Catholic Church. The grand jury has issued its report of findings. While this is an uncomfortable and unsettling topic, we must speak openly and frankly about it.

“First of all, none you deserve to be confronted with the behavior described in this report. It is unsettling, tragic and it breaks your heart. To all of you, most especially to those of you who are victims of such heinous actions by members of the clergy, to those of who have suffered because of misguided and inappropriate decisions of church leaders and to those of you who make up the blessed faithful of our church who are simply trying to live your lives as sincere and committed servants of the Lord, I offer my deepest apologies for such behavior and the consequences of this tragic reality in our church.

“There are simply no words that I can offer to take away the pain this has caused. Simply put child sexual abuse cannot be tolerated and must be eradicated from our church. Sadly, the church has taken far too long to do that. While the investigation and the report represent a disturbing and painful chapter in the life of our church, it is necessary for us to address them in order for us to move ahead in a more positive way.”

Bishop Bambera’s message in a video can be found in English here and with Spanish subtitles here. A diocesan statement on the grand jury report and a list released Aug. 14 of priests, religious, lay employees and volunteers credibly accused of abuse released can be found here.

“To the survivors of sexual abuse in the church, whether it was at the hands of a priest, a teacher, volunteer, or even a family member: I grieve for you and I grieve with you. In the Diocese of Greensburg, we stand ready to listen to you and, if you want it, we stand ready to help you heal as much as possible. It does not matter when it occurred, by whom it occurred, where it occurred, or how it occurred. We want to help. Jesus expects nothing less from us.

“Let me tell you this, just in case you have some misgivings because of your past experience with the church: We love you. And I ask all of the Catholic faithful to support you with the care and concern that you deserve.

“Specifically, to those of you who were abused by one of our priests. In the name of the entire Catholic church, I apologize to you for those men who stole your childhood innocence, and in some cases, robbed you of your faith. Those priests acted as wolves among us, even if they were dressed in sheep’s clothing. I am sorry for that. In fact, honestly, I am extremely angry at them for what they did to you. I am outraged along with everyone else. I can understand your anger with bishops as well — perhaps even with me. You deserved much better from us. I promise to do my best to continue to ensure that it will never happen again.

Bishop Malesic’s full statement — in a video message and transcript — can be found here. The diocese Aug. 14 also released a list of clergy with credible and substantiated allegations against them. Other information and a special issue of The Catholic Accent, the diocesan paper, can be found here.

“Today, I want to express my sorrow directly to the victims of sexual abuse that occurred within the Diocese of Erie. You have suffered in darkness for a very long time.

“As the grand jury report demonstrates, you have experienced unimaginably cruel behavior by the very individuals who should have had the greatest interest in protecting you. You were betrayed by people holding themselves out as servants of God, teachers of children or leaders in the community. … I humbly offer my sincere apology to each victim who has been violated by anyone affiliated with the Catholic Church. I hope that you can accept it. I know that apologizing is only one step in a very long and complex process of healing.

“You may be aware that we recently unveiled new policies and implemented procedures to ensure that this criminal behavior is stopped. We just released another update of our website today, adding names in light of the grand jury report. This is one sign of our commitment to transparency.

“But this is not the moment to focus on our efforts. Today, I simply stand before you, humbled and sorrowful.”