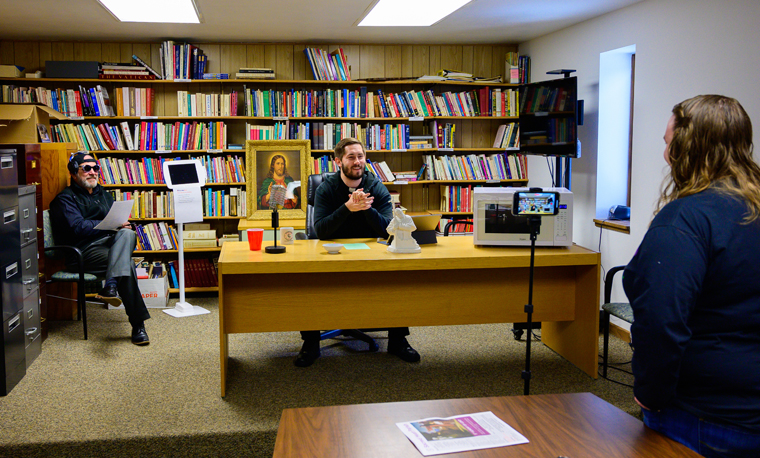 SHAWANO, Wis. (CNS) — There’s only one place Catholics can listen to a priest sing Disney tunes in falsetto, enjoy daily commentary on the taste and squeakiness of cheese curds and learn a lesson or two about faith or church teachings.

While many parishes have taken to Facebook and YouTube for livestreamed and recorded liturgies since the COVID-19 pandemic forced dioceses to end the celebration of public Masses, Sacred Heart Parish is also offering lighthearted commentary on its Facebook page.

Since March 25, the priest and deacon have been hosting the Staycation 2020 videos, which last anywhere from 15 to 25 minutes. “Staycation 2020” can be viewed at facebook.com/pg/sacredheartshawano/videos.

“We may try to interview the principal and maintain safe distance by having him on the TV monitor,” added Deacon Lonick. “Today’s episode features a cooking show that we prerecorded yesterday and it’s phenomenal. It’s gourmet Italian food.”

During an April 2 interview with The Compass, newspaper of the Diocese of Green Bay, Wisconsin, the priest explained that Staycation 2020 evolved from a successful segment that aired after his first livestreamed Mass on the fourth Sunday of Lent, March 22.

“It was just a silly after-Mass press conference that we did, really completely as a joke, and people seemed to like it,” said Father Valentyn. The segment received over 8,500 views.

The segment continues each Sunday, and due to its popularity, “we decided we would start putting out daily videos to keep in touch with our parishioners,” said Father Valentyn. “To be honest, nobody expected (interest) from more than just our parish. We just want to keep reminding them that we are still here — and of course, the need for everyone to support one another in prayer.”

The Staycation videos consist of an introduction that includes Father Valentyn singing a Disney movie song, such as from the movie “Moana.” “Then there’s something catechetical, oftentimes related to our school, and then what is called the cheese curd taste test,” he said. “I’m trying to sample as many of the different cheese curds in the area as I can.”

“We rate them, we keep a running chart of the best cheese curds” from area cheese factories, said Deacon Lonick. “We even do a shoutout, ‘If you don’t like the curds that we’re testing, send some in and we’ll see what they are like.’ We have worked up an inventory of cheese curds in our fridge.”

The two parish leaders begin sketching out their daily routine around 10 a.m. in a library at the parish office, where a long desk topped with a microwave for warming up cheese curds and a statuette of St. John Paul II serves as the set’s focal point.

Parish youth minister Kate Ruth records the show on an iPhone fastened to a tripod, and Autumne Gee, director of admissions and development at Sacred Heart School, edits and posts the video to the parish’s Facebook page around noon.

Each video receives between 700 to 1,000 views each day, said Father Valentyn.

“What’s really weird is my mom and dad in Virginia are watching it every day,” said Deacon Lonick. “It’s like, ‘Come on people, get a life.’ I think if there’s anything else on TV at that time, we are probably as equal in terms of entertainment value.”

“Overall, the responses have been overwhelmingly positive, such as, ‘Thanks for doing this, we look forward to seeing you guys every day,'” said Father Valentyn. “That’s the goal, just to have at least some touch point every day with our people.”

One unintended consequence, said Deacon Lonick, was that connectedness to parishioners has helped online giving.

“We are reminding people school is still in session, the teachers are still getting paid, our staff is still getting paid and we need their help,” he said. “We’ve seen just a phenomenal increase in the online giving and if we only did Mass once a week, I don’t think those numbers would be as strong.”

Added Father Valentyn, “It’s more than just money, it’s reminding them that we are still here. The big fear is just losing touch and people forgetting that this is still their home, especially because we don’t know how long this is going to go on.”

Not every pastor has the time or resources to offer humorous online videos, said Father Valentyn, but he encourages priests to at least offer livestream Sunday Masses.

“A lot of my brother priests are making fun of me about the opening songs that I have been doing,” he said. “But I would encourage everyone to take advantage of the many options for livestream Sunday Masses because, even though it’s not the same as being able to actually receive Communion and be present, it’s something. … Especially for our homebound parishioners, it’s one thing to watch a Mass on EWTN. It’s another thing to see your parish with your people.”