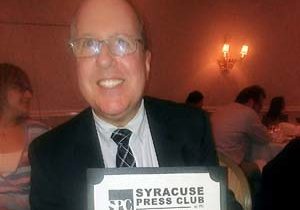 Catholic Sun Associate Editor Tom Maguire on May 19 took a second place in the Syracuse Press Club’s 42nd Annual Professional Recognition Awards for his Oct. 23, 2019, story “Coach V and the way to be.”

“Coach V and the way to be” focuses on the now retired soccer coach Oscar Vergara, who ingrained his “philosophy of Sportsmanship and Fair Play” in his players in a 43-year career that included over 500 wins. He coached for about 37 years at Bishop Ludden High School, his alma mater.

“He’s not the type of person that likes to be in the spotlight,” one of his former players says of Coach V in the story. “Very humble.”

“He’d rather us lose a game fairly than win a game cheaply,” another player says.

And Gallagher Driscoll, Ludden’s athletic director, says: “He has taught our student athletes how to play the game; how to win and lose with dignity and class. He has always held them to a higher standard. He is an icon on and off the field.”

Maguire, who just completed his fourth year at the Sun, competed in the Non-Daily Print Sports Story category. Taking first place was Phil Blackwell, of the Eagle Star-Review, for “C-NS football heading to finals.” Third place went to Jeff Kramer and Cherilyn Beckles, of The Stand, for “Cycling forward.”

The Syracuse Press Club says that volunteers from across the country judge the entries submitted by Central New York’s TV, radio, print, online, and college journalists.