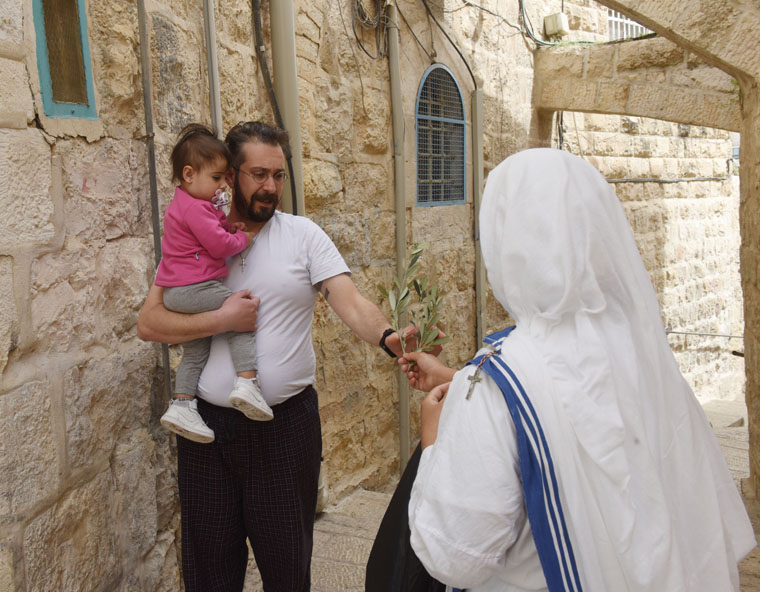 JERUSALEM (CNS) — Nadine Bitar wore a surgical mask and waited 109 yards from her home in the Old City — as permitted by the Israeli Ministry of Health — to receive a blessed olive branch from Franciscan Father Amjad Sabbara of St. Saviour Parish.

Father Sabbara wound his way around the narrowest of alleyways of his parish in the Old City Palm Sunday, April 5. When he and several assistants arrived to give Bitar the branch and pray with her, she took several branches and Mass booklets, then distributed them among her extended family and neighbors, some of whom are elderly and were unable to come down to receive the branches.

With the booklets, they were able to follow the Palm Sunday Mass celebrated by Archbishop Pierbattista Pizzaballa, apostolic administrator of Jerusalem, and livestreamed from the Church of the Holy Sepulcher, which has been closed since March 25.

For the Christian residents of the Old City, Holy Week and Easter are like a family celebration, said Bitar.

“It is heartbreaking we can’t participate in the church service and the public Mass on Palm Sunday, but we have faith this pain we are living into Holy Week is also giving us hope of the resurrection,” she said. “It is a lesson for us to take some time for God and actually know the word of God.”

Due to the global pandemic of the COVID-19 virus, all religious gatherings have been prohibited, and all places of worship have been closed by both the Israeli and Palestinian ministries of health to prevent the further spreading of the disease. In his March 26 Pastoral Guidelines for Holy Week following the issuing of the restrictions, Archbishop Pizzaballa suggested priests distribute previously blessed olive branches and holy water to their parishioners in adherence with government directives.

“Usually we go to the priest for him to bless our olive branches; this time he came to us. It was a very heartwarming gesture. He did this so we could feel Palm Sunday, so we could have the blessed olive branch in our houses,” she said.

Father Sabbara said it was the first time in the 28 years of his priesthood that he could not hold the traditional Palm Sunday celebration and Mass.

“It was sad but at the same time it was full of hope,” he said. Though he celebrated Mass for the Franciscans at St. Saviour Church, he missed seeing the faces of the young children with their palm fronds, he said.

“When I got to the (Old City) quarters and I saw the little boys and girls taking the branches, I (felt like) crying. I understand more my vocation,” he said.

Moses Soufan, 36, left his work as a hotel security guard briefly to come with his 1-year-old niece to receive the branches and readings for him and his parents, with whom he lives.

Although the hotel where he works is closed, he is part of the skeleton staff providing security for the building. The tourist sector in both the Palestinian territories — whose economy depends largely on tourism — and in Israel has been decimated as international travel has come to a halt because of COVID-19.

“Unfortunately, this year there are no pilgrims coming to the country to be able to celebrate (Easter) as usual,” said Soufan.

Though they could follow the Palm Sunday Mass through the livestream, it is not the same as the shared experience of the festive gathering on the Mount of Olives and walking down in the procession to the Old City, he said.

“It is sad; since I was a little boy I have been going to the Mount of Olives, walking all the way down celebrating,” he said. “It breaks my heart not to be able to be at the Church of the Holy Sepulcher on this day or on Holy Saturday or on Easter. When I got the news I couldn’t believe it. I have been (going) … every year; I have never missed a year.”

“My intentions with my prayers today, like everyone else, are for this to be over, and maybe on Holy Saturday it will be over,” added Soufan.

In his Palm Sunday Message, Archbishop Pizzaballa reminded the faithful that, although in fearful and uncertain times, people want to have “faith in a God who gives us certainties and security. Christian faith is based on hope and love, not on certainty.”

“(God) won’t solve all our problems, he won’t give us all the certainties that our human nature needs, but he won’t leave us alone,” said Archbishop Pizzaballa. “We know he loves us.”

After the Mass, Bitar went out to the balcony of the home she shares with her two brothers and their families and her mother to look out at the view of the Mount of Olives. Usually, she said, on Palm Sunday she can see thousands of people coming down the hill.

“Now it is empty and that is heartbreaking,” she said. “But that is OK. The stones of the Old City of Jerusalem are the witnesses of our voices and the voices of our ancestors. This is a message of hope for the whole world during this Easter season; we can come closer to God and see his glory as he is removing this virus from the world.”