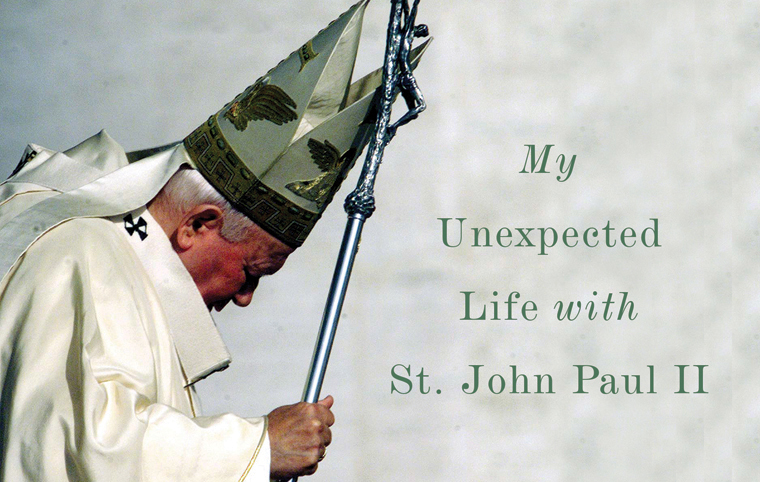 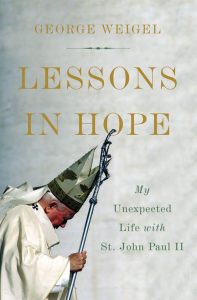 ROME (CNS) — For some 25 years as pope, St. John Paul II would invite people to his table each day — sharing breakfast, lunch, dinner and conversation with a wide variety of cardinals, bishops, theologians, writers and friends.

George Weigel, the author and scholar, was one of those guests on dozens of occasions and it was over a meal that he asked Pope John Paul the questions that form the core of “Witness to Hope: The Biography of Pope John Paul II,” published in 1999. The meals and conversations continued, providing information for the sequel, “The End and the Beginning: Pope John Paul II — The Victory of Freedom, the Last Years, the Legacy,” published in 2010.

Now, Weigel is sharing the mood, anecdotes and reflections on the table talk in the more personal “Lessons in Hope: My Unexpected Life with St. John Paul II.”

Interviewed in Rome Dec. 12, Weigel said he decided “to tell the story of our conversations,” which took place over a dozen years. But for that to make sense, he said, he also had to write about events and experiences in his life that prepared him to understand the history, philosophy and theology discussed around the table.

Of course, he said, the conversations also included both lighter moments and personal ones, such as when Pope John Paul asked how Weigel’s mother was doing after his father died.

Sharing a meal and a table was important to Pope John Paul, Weigel said, because he “understood that a pope who relies only on the official channels of information — nuncios, Curia, bishops’ conferences — is not going to get all the information he needs because that information is being filtered bureaucratically.”

“The table rather than the desk was his favorite point of encounter,” the author said.

The conversations gave the pope different points of view on the situation of the church, on issues of theology and on political and social realities around the world, Weigel said.

Then-Cardinal Joseph Ratzinger, prefect of the Congregation for the Doctrine of the Faith, once told Weigel that “major documents and audience themes would be hashed out over lunches in the papal apartments.”

But, he said, at the same time, friendships were very important to him and he made sure to nourish them at the dinner table.

Pope John Paul would ask his guests their opinions about books, films, world leaders and political situations. “He was the most insatiably curious man I have ever met,” Weigel said. “He always wanted to know what was happening.”

The pope’s curiosity, he said, was less a “tic” than a sign that “he really did believe in the providential guidance of history,” which meant he needed to stay informed “in order to find the providential footprints.”