‘Thankful for every memory’ 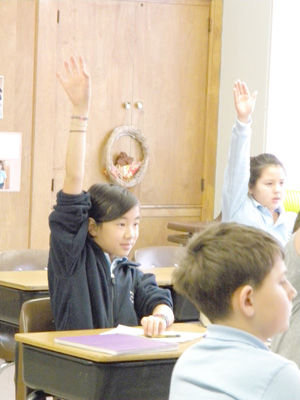 EAST SYRACUSE — When St. Daniel School and St. Matthew’s School combined in 2007 it wasn’t anticipated that their efforts would result in closing the school within a few years. Father Joseph Clemente, pastor of St. Matthew Church and Msgr. Eugene Yennock, pastor of St. Daniel Church, announced Jan. 5 that St. Daniel-St. Matthew Academy will close at the end of this school year. Father Clemente said declining enrollment numbers led to the closure.

The diocese issued a press release stating, “St. Daniel-St. Matthew Academy announced today that, due to declining enrollment, its students will be transitioning to area Catholic elementary schools for the 2010-2011 school year. This decision underscores the commitment of the school’s pastors, as well as the Diocese of Syracuse, to assure the continuance of quality Catholic education in a fiscally sound environment. It is believed that this move will strengthen the Catholic school system in the western region of the Diocese of Syracuse.”

A few years ago the diocese made the decision to consolidate some schools in Onondaga County and reopen them as four Bishop’s Academies. This means those schools are part of a system overseen by the diocesan Catholic Schools Office. There are still several elementary schools that are financially supported by the parishes they are affiliated with, such as St. Daniel-St. Matthew. According to Christopher Mominey, diocesan superintendent of Catholic schools, the schools in the Rome, Utica and Binghamton communities are already part of the diocese’s school system. The process of evaluating the systems, either parish schools or consolidated, is still ongoing. Many factors have to be considered in that decision process but for now, in the Western Region of the diocese some schools will continue to be parish schools. Parishes in Onondaga County that do not have an associated school pay a subsidy to support the academies. All of the Onondaga County parishes pay to support the two diocesan junior/senior high schools, Bishop Grimes and Bishop Ludden.

“We were anticipating re-registration at the end of this month and we knew we were graduating 25 students from sixth grade this year,” Father Clemente said. “Last year we enrolled only 14 in kindergarten and using patterns of enrollment trends for the last 10 years we could pretty accurately predict that we’d end up with about 98 students in the 2010-11 school year. This is too low, in our estimation, to have a vibrant school.”

The pastors held a meeting with parents the evening of Jan. 5 and with the faculty that same afternoon. The mood, Father Clemente said, was one of “quiet shock.”  He said the academy will collaborate with other Catholic schools in the area as far as finding another Catholic school for the students to attend.

It was only a couple of years ago when the two parishes combined resources to support the one academy. Father Clemente said neither pastor regrets that decision. “We may be sorry we didn’t merge sooner, but no, we don’t regret that we merged at all. We are all thankful for every memory we have. We had 195 enrolled the first year. Our economy hasn’t helped the situation. We hear on a regular basis about parents who have lost jobs. Tuition is about $370 a month for a family and we weren’t able to give enough assistance. Parishes have less money now as well.”

Deacon Joseph Celentano is principal of the academy and he said he will be searching for work alongside the faculty at the school. Deacons are given a salary when they work in a paid ministry of a parish, he explained. Deacon Celentano said he will gather information from public schools in the area as far as learning about the application process, and he also plans to seek assistance from Le Moyne College’s Career Office to help faculty and staff prepare resumes and brush up on interview skills. The academy will use whatever resources available to assist faculty and staff in finding new employment.

Deacon Celentano said the academy will host information sessions for parents bringing together principals and staff of the other area Catholic schools such as Immaculate Conception in Fayetteville, Holy Cross in DeWitt and Blessed Sacrament in Eastwood.

“We want to introduce those principals to our parents so that they can begin to look at what schools to continue providing Catholic education to their children,” Deacon Celentano said.

He has grandchildren who attend St. Daniel-St. Matthew Academy. They will miss riding to school with their grandfather but even those youngsters realize that change has to happen sometimes. They made a drawing that says, “God has a plan for you.”