The judge rules: Get ye some hobbies! 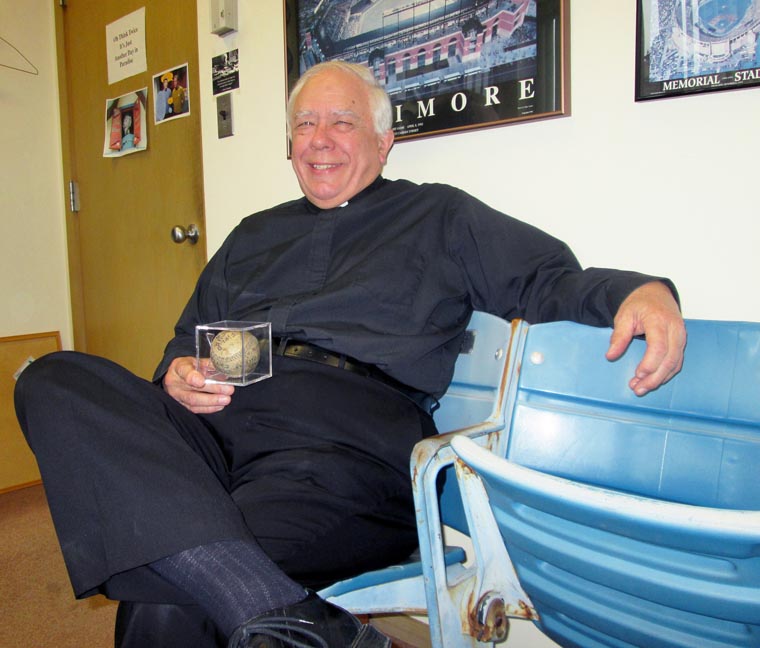 So gifted at signage, Msgr. Timothy S. Elmer nevertheless threw away a chance to be an Olean restaurateur.

When he was studying for his master’s degree in history at St. Bonaventure University, the monsignor worked nights as a cook at a restaurant.

For Lent one year, he was told to put up a sign outside the restaurant to entice customers. The dutiful worker put up letters spelling out “It’s a Good Friday for fish.”

Now, a priest friend tweaks him about it in a yearly phone message: He recites those inspired six words and hangs up.

The Olean restaurant owner actually dangled the job of restaurant manager. “‘Just quit that,’” he said of seminary studies. Sorry, but churchly ministries and various avocations trumped the world of signage puns.

Known for his friendly manner and soft-spoken style, Msgr. Elmer, who also has a licentiate in canon law, now is the diocesan Vicar General and Judicial Vicar.

But the monsignor is much more than a jurisprudential entity. He took the advice of Father Michael Dietrich, who always told priests: “You’ve got to have outside interests.”

So Msgr. Elmer plays the bagpipes (he soloed outside the Cathedral for Bishop James M. Moynihan’s wake), hunts down defunct railroad sites (when he was younger, he built model train stations), grows flowers (he even built a gazebo), and follows baseball (you can sit on real stadium chairs in his office).

He grew up in Oneida, and as a boy he heard the NYO&W line (New York, Ontario and Western Railway) passing by.

“Not too many people do this stuff,” the monsignor said of hunting down old railroad sites such as little stations. At the end of March, a buddy and he took a day and went down to Delaware County and followed the NYO&W (which went from New York City to Oswego)  — from Pennsylvania up into Sidney.

He limits his baseball to spectating now, but Msgr. Elmer was a pitcher in high school. He taught himself to throw a sinking knuckleball that hitters dribbled into the infield if they hit it at all.

For a time he coached Little Leaguers in Eastwood. Girls played with boys at the younger level, and the girl on the monsignor’s team was named Linda.

He remembers the opposing coach yelling when she came up to bat in a key situation:  “Oh, no, it’s Linda!”

“Linda hit grand slam!” the monsignor recalled with  an appreciative laugh. “She pounded it into the outfield. Yeah. She really did.”

About 10 years ago, the ’ol knuckleballer played in the annual Men in Black softball game for clergy members. He hurt his leg.

But it’s been a good life with a happy ministry and many sidelines for the affable monsignor.

If it weren’t this — the priesthood — it would have been a career in the National Park Service, he said.

“I say I could have been a park ranger,” he said, “but I think I probably would have ended up in the historical parks —  Civil War battlefield or something like that.”