Through mission service in Guatemala, diocesan seminarians are ‘shaped into better laborers for God’s vineyard’ 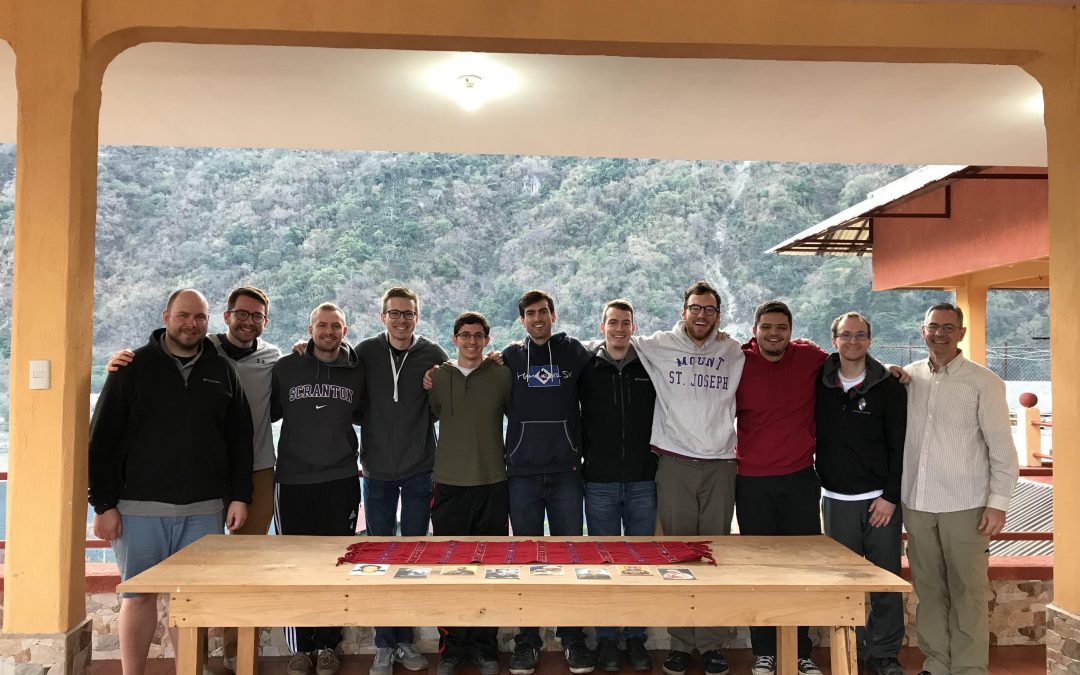 By Nate Brooks and Brendan Foley, seminarians of the Diocese of Syracuse | Special to the Catholic Sun

Editor’s note: Diocesan seminarians Nate Brooks and Brendan Foley traveled on mission to Guatemala in February, spending a week in service and community. They shared the following reflection on the experience with the Sun. 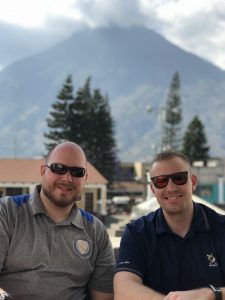 Thanks to the late Diocese of Syracuse priest Father Philip Keane, S.S., seminarians at St. Mary’s Seminary & University in Baltimore have a weeklong break from their regular obligations and course work every February. During his time as a faculty member at St. Mary’s, Father Keane implemented this week off hoping to break up the winter and give seminarians and faculty alike a chance to regroup, take time for retreat, and to return to the seminary feeling refreshed. He would be pleased to learn what that time allowed 10 seminarians and a current faculty member to do this year. We were among that group blessed with an incredible opportunity to travel to San Lucas Tolimán, Guatemala, to volunteer at the Friends of San Lucas Mission.

Back in 1962, diocesan priest Father Greg Schaffer of New Ulm, Minnesota, found himself ordained no more than three years and assigned by his bishop to the Diocese of Sololá, Guatemala. This came in response to a Vatican appeal to clergy and laity alike to assist in world missions, especially in Central and South America. This was a very unexpected assignment and very much a lesson in trust and obedience! However, what was intended to last only a few years evolved into 50 years of devoted service in priestly ministry to the community of San Lucas. Father Greg met tremendous need when he arrived in Guatemala, but he did not get discouraged. Through the grace of God at work in him, he gave entirely of himself and became a true member of his surrounding community. In addition to providing important pastoral and spiritual care, his ministry led to remarkable developments in housing, land distribution, farming, nutrition, education, and healthcare. Father Greg’s efforts continue to flourish today and the local community has the utmost respect and admiration for him and for his friends who continually support his Mission. Each year hundreds of volunteers flock to San Lucas to continue that work started long ago.

We first learned about the Mission from two of our fellow seminarians who had previously volunteered there during their undergraduate work at Gannon University. They were so moved by their experience they wanted to organize a group from the seminary to go during Father Keane’s winter break. With approval and support from St. Mary’s and with the generous financial assistance of many donors, it became clear to us that this opportunity was not just a special invitation before us but indeed an important part of our formation for priesthood. Opportunities like this are not intended to diminish the importance of concern for local and domestic poverty — because those matters are always deserving of our attention. This experience offered the potential to broaden our perspective on ministry even more by challenging us to leave our comfort zones and witness a culture far different from our own. In the end, we could not help but be transformed by the people and the faith that we encountered in the very hospitable culture of San Lucas, Guatemala. 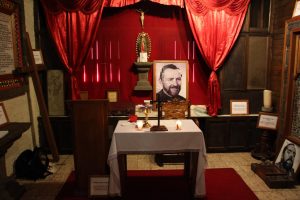 Our first full day there set the tone for our experience. We were able to take a short boat ride to a neighboring town, Santiago Atitlan, where Sunday Mass was celebrated for us in the chapel where Blessed Stanley Rother was martyred in 1981.

We couldn’t help but be humbled by seeing the stains of Father Stanley’s blood as well as bullets that claimed his life encased on the ground where he died. It was striking to have this powerful image of death juxtaposed with the celebration of the Mass, where we call to mind Jesus’ own passion and death, and ultimately remember his Resurrection.

It was a profound point of reflection to see this site of martyrdom and be reminded how his witness, as well as the witness of our lives, needs to continually make the Resurrection present for our world, especially in the most troubled places. This, of course, offered us much to reflect on regarding our call as disciples of Christ, and not just in our vocation as future priests. 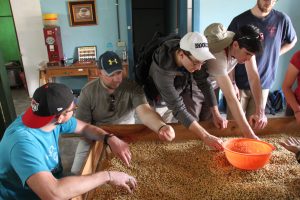 Seminarian of the Diocese of Syracuse Nate Brooks (second from left) helps to sort beans at a local coffee production site in Guatemala. (Photo courtesy Nate Brooks and Brendan Foley)

While working with the Friends of San Lucas, we were able to engage with the hardworking community every day, work with our hands, and be involved with the Mission’s various projects around the town: construction in Father Greg’s elementary school and in several local houses, sorting beans at one of the local coffee production sites, learning from workers in the local women’s center, and observing operations in the Mission’s medical clinic. In a short amount of time we learned the details of many aspects of Guatemalan life and saw firsthand the ongoing effects of Father Greg’s ministry.

For not having a wealth of construction experience in our group of seminarians, we were still given significant jobs to complete daily, like digging out foundations for homes, mixing cement, moving and breaking large rocks, and even constructing stoves to someday be used in family homes. We accomplished our work with not much more than simple tools and the sweat of our brows. Jobs that would only take a couple of hours with heavy machinery in the U.S. would potentially take a whole day in Guatemala. As a result, we found ourselves working closely as a team for much of our time. We quickly learned about the talents and strengths of our brother seminarians that we otherwise never would have known. Not only did we see a new side of the people we encounter every day at St. Mary’s, but we also learned from and enjoyed the company of the Guatemalans whom we worked alongside. They had so much to offer us, and it did not take fluency in Spanish to be able to have a meaningful interaction. 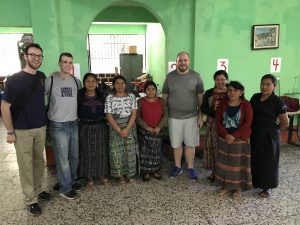 Seminarian of the Diocese of Syracuse Nate Brooks (fourth from right) with members of the Mission community in Guatemala. (Photo courtesy Nate Brooks and Brendan Foley)

At the end of each day, we found ourselves tired, often with blisters on our hands, and sunburns on our faces. The physical work we did each day was not so magnificent that it would not have been accomplished had we not been there. Someone else could have done what we did. But what lasts in our minds and what continues to transform our hearts are the many interactions shared with people, the words that were exchanged, the intentional moments of prayer, and the many unexpected moments of gratitude for God’s abiding presence in our lives. While we dug deep and chiseled away at the physical matter before us across the different worksites, we were actually allowing ourselves to be subtly shaped into better laborers for God’s vineyard. 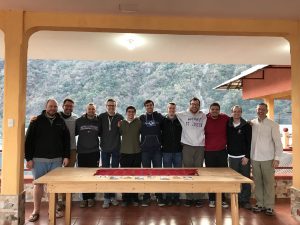 While we were encountering Christ around us, our personal relationships with him were being deepened from within. As a result, the spiritual impact of the memories we gained there is still unfolding for us. We know we have much to be grateful for. What remains clear for us as seminarians, hoping to one day serve God and his people as his priests, is as soon as someone says “yes” to trusting in God’s grace and to discerning God’s call in life, there’s no telling where that road will lead. With each new challenge, we are gifted with a new opportunity to trust in God again.

To learn more about Father Greg’s work and the San Lucas Mission, or to purchase their incredibly popular coffee, visit https://www.sanlucasmission.org/. Thank you for your continued prayers for an increase in vocations to the priesthood and consecrated religious life in the Diocese of Syracuse!