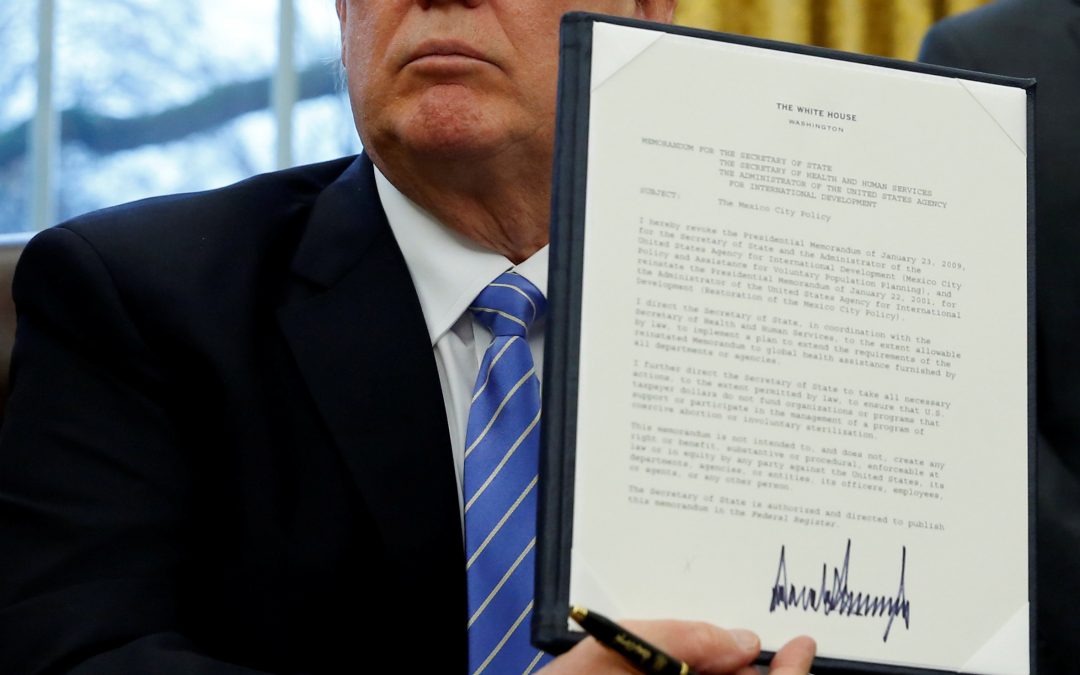 The action was hailed by pro-life leaders.

“President Trump is continuing Ronald Reagan’s legacy by taking immediate action on day one to stop the promotion of abortion through our tax dollars overseas,” said a Jan. 23 statement from Marjorie Dannenfelser, president of the Susan B. Anthony List.

“President Trump’s immediate action to promote respect for all human life, including vulnerable unborn children abroad, as well as conscience rights, sends a strong signal about his administration’s pro-life priorities,” she said.

“By redirecting taxpayer dollars away from the international abortion industry, President Trump has reinstituted life-affirming protections for unborn children and their mothers,” said a Jan. 23 statement by Rep. Chris Smith, R-New Jersey, co-chair of the Congressional Pro-Life Caucus. “There is political consensus that taxpayer dollars should not fund abortion and the abortion industry.”

“Now we see pro-life fruits of the election unfolding as President Trump has taken immediate action to reinstitute President Reagan’s Mexico City Policy,” said Father Frank Pavone, head of Priests for Life, in a Jan. 23 statement. “Poll after poll shows that Americans do not want their tax money to pay for abortions. Stopping funding to foreign pro-abortion groups is a powerful first step toward doing the same domestically.”

Named for the city that hosted the U.N. International Conference on Population in 1984 — where Reagan, then in his first term as president, unveiled it — the Mexico City Policy has been the textbook definition of a political football. Adopted by a Republican president, it has been rescinded when Democrats sat in the White House, only to be restored when Republicans claimed the presidency.

In 1993, President Bill Clinton’s revocation of the policy was made so quickly following his inauguration that some participants in the March for Life, conducted two days after the inauguration, carried “Impeach Clinton” signs.

Court challenges to the policy resulted in rulings in 1987 and 1988 that limited its application to foreign NGOs.

The executive order “makes clear that Trump intends to carry out with his promised pro-life agenda. Taxpayer funding for abortions, whether here or overseas, is unpopular with voters and is plain wrong,” said a Jan. 23 statement by Ashley McGuire, a senior fellow with the Catholic Association.

“It amounts to subsidizing the violent victimization of women and children, in particular poor and minority women who feel they have no choice but to have an abortion,” McGuire said. “Redirecting those funds to health centers that offer women real choice and hope is the right policy moving forward.”