Trump has chance to reshape court in choosing Kennedy’s successor 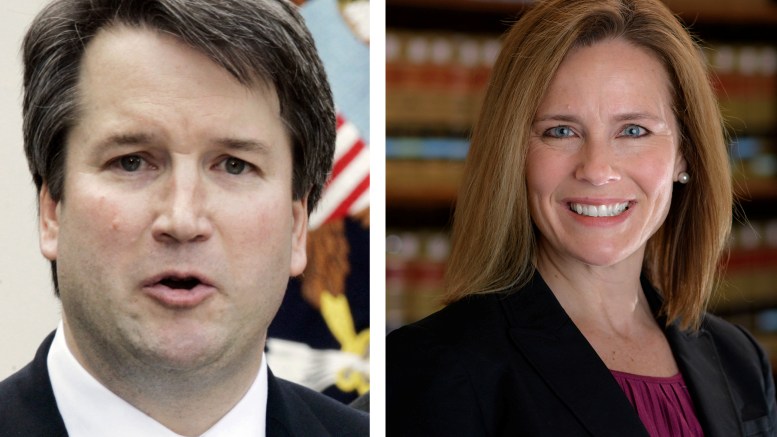 WASHINGTON (CNS) — President Donald Trump has the chance to reshape the Supreme Court by filling the vacancy created by Justice Anthony Kennedy’s retirement.

Replacing Kennedy, who is Catholic and has been on the court since 1988, with anyone on his list of potential nominees will probably turn the court to the right on social issues and leave it about where it is on economic issues, according to legal experts who spoke to Catholic News Service.

White House officials said July 6 that Trump was focusing on three judges of six who have appeared on many of the reported shortlists. Two of them are Catholic: Brett Kavanaugh, of the D.C. Circuit Court of Appeals, and Amy Coney Barrett, of the 7th Circuit. The third is Raymond Kethledge, of the 6th Circuit. The other three on the shortlist are: Amul Thapar and Joan Larsen, both of the 6th Circuit; and Thomas Hardiman, of the 3rd Circuit.

Trump said he will announce his nominee July 9.

“Kennedy was a justice who occupied the middle of the court, and he was sometimes unpredictable, but he was strongly committed to freedom of speech, federalism and gay rights,” said Michael Moreland, a professor of law and religion and director of the Eleanor H. McCullen Center for Law, Religion and Public Policy at Villanova University, a Catholic university in Pennsylvania.

“His involvement in decisions related to gay rights is certainly the thing he’s most famous for,” he added.

Boris Heersink, an assistant professor of political science at Jesuit-run Fordham University in New York, also said that Kennedy probably sees his rulings on LGBT issues as the main part of his legacy.

Heersink said that Kennedy’s main motivation for stepping down from the court was an 81-year-old man’s wish to retire. He also said that since same-sex marriage seems to be settled law, and the idea of overturning Obergefell v. Hodges has not been a big part of conservative discourse recently, Kennedy probably felt that his legacy there would be secure under a Republican president.

“He’s sort of in the middle, but closer to the conservative justices than the liberal justices. He might prefer a Republican pick his successor,” Heersink said. Stepping down under a Republican president would probably lead to his replacement by someone closer to his views on economic issues and First Amendment jurisprudence.

“He wasn’t always predictable, but Kennedy very often voted as an originalist,” said Cathleen Kaveny, a professor of theology and law at Boston College. She defined originalism as a theory of constitutional interpretation which says that jurisprudence is “bound to, in some way, what the Framers thought about the Constitution.”

On abortion, “Justice Kennedy was very much in the middle of the court,” Moreland said.

While many social conservatives are hoping Trump’s pick will be an opponent of Roe v. Wade and lead a movement on the court to overturn that decision, Moreland said that was unlikely. Instead, he said, the thinks the court “would be more open to the states regulating and restricting abortion.”

Kennedy also was often in the middle of the court on end-of-life issues.

While he voted against removing feeding tubes and assisted suicide in some decisions, he also was part of a majority in Gonzalez v. Oregon, in which the court found that the Controlled Substances Act could not be enforced against doctors who, following the Oregon state law, prescribed medicine that would allow patients to end their life.

Kennedy also voted in favor of several restrictions on the use of the death penalty while on the court, which prevent its use against minors and people with intellectual disabilities.

Heersink said that replacing Kennedy with any of the people on Trump’s list would probably not affect the court’s decisions on economic issues.

“There might not be that much of a difference. Perhaps the decisions will be written in a bit more conservative way,” he said. “In all the recent decisions, Kennedy was on the conservative side.”

In some of the more famous cases decided while Kennedy was on the court, such as the recent Janus v. AFSCME and Citizens United v. FEC, Kennedy’s bent in favor of free speech and his economic conservativism came together — in Janus, to decide that requiring public sector workers who are not part of a union to pay “fair share” dues violated their rights to free speech, and in Citizens United, finding that the free speech clause of the First Amendment prevents restrictions on independent expenditures by corporations, labor unions, and other associations.

Moreland believes that any of the people on Trump’s list would be successfully nominated. “I don’t see how the Democrats could stop the nomination,” he said. “Everyone on the list has an excellent reputation.”

Heersink also mentioned that anyone Trump might nominate would know what they have to say in a Senate hearing in order to be confirmed.

“If you want to have a chance at the Supreme Court you have to say, ‘I don’t have pre-existing ideas about what I’d do in a hypothetical case,'” he said.

He also mentioned that Trump’s nominee would probably not have a record of extensive writings or decisions about abortion, since such a record might make it difficult for them to make their way through the nomination process.

“If you think you might have a shot at the Supreme Court in the future and want to preserve it, you have to behave in a certain way as soon as you get out of law school. Maybe even while you’re still in law school,” Kaveny said.

Sen. Susan Collins, R-Maine, has said that she will oppose any nominee who shows “hostility” to Roe.

“Roe v. Wade is a constitutional right that is well established, and no less an authority than Chief Justice (John) Roberts said that repeatedly at his confirmation hearing,” she said in an interview with CNN.

Sen. Lisa Murkowski, R-Alaska, is the other Republican in the Senate who supports keeping abortion legal, and her vote also could end up being necessary for the nominee’s success.

Moreland said that political pressure on Democrats in red states could lead them to vote for Trump’s nominee.

Three Senate Democrats up for re-election in 2018 in states that cast their electoral votes for Trump — Joe Donnelly of Indiana, Heidi Heitkamp of North Dakota, and Joe Manchin of West Virginia — voted to confirm Justice Neil Gorsuch in 2017, and they might vote for Trump’s nominee for similar reasons.