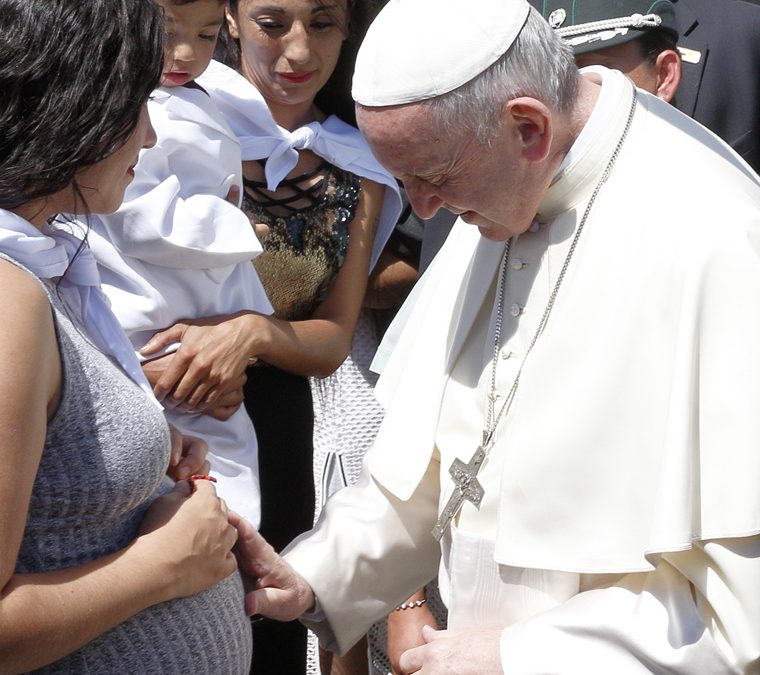 VATICAN CITY (CNS) — Courage in preaching the truth, clarity in giving a good example and motherly care in teaching the faith are essential components in sharing the Gospel, Pope Francis said.

“The faith is transmitted in a maternal womb, the womb of the church, because the church is mother,” the pope said in his homily Jan. 26 at morning Mass in the Domus Sanctae Marthae.

Preaching on the day’s first reading, which was taken from the Second Letter to Timothy, Pope Francis noted how St. Paul writes to Timothy of the faith “that first lived in your grandmother Lois and in your mother Eunice and that I am confident lives also in you.”

“The maternity of the church continues in the maternity of mothers, of women,” he said. Often, they are the ones who introduce children to the faith and to Christian practice.

But Pope Francis said he sometimes wonders if women today are like the grandmother and mother in the Bible passage or do they think that their grandchildren or children will learn what they need to know about the faith from their catechism classes.

“I tell you, it makes me sad when I see children who don’t know how to make the sign of the cross … because their mother and grandmother never taught them,” he said. And when a mother is giving advice to a daughter about to be married, he asked, “does she teach her that she must transmit the faith?”

Sharing the faith, he said, also is a matter of courage because a “tepid” message will never convince anyone.

But without the witness of a good example, the pope said, even the strongest, clearest preaching will bear no fruit.

The early Christian community grew because people would see the new Christians and exclaim, “See how they love one another,” he said.

Are today’s parishes like that? the pope asked. Or is it likely that a person walks in and hears one parishioner speaking ill of another. “And how can you transmit the faith when the air is so poisoned by gossip and slander?”

What you want, he said, is visitors to leave saying, “Look, these never speak ill of each other. He does works of charity. When someone is sick she goes to visit. Why do they do this?”

A good witness generates curiosity and makes people ask why, he said. Then it is easy to explain and say, “because he has faith; because she follows Jesus’ footsteps.”