U.S. bishops’ conference arose out of a national crisis a century ago 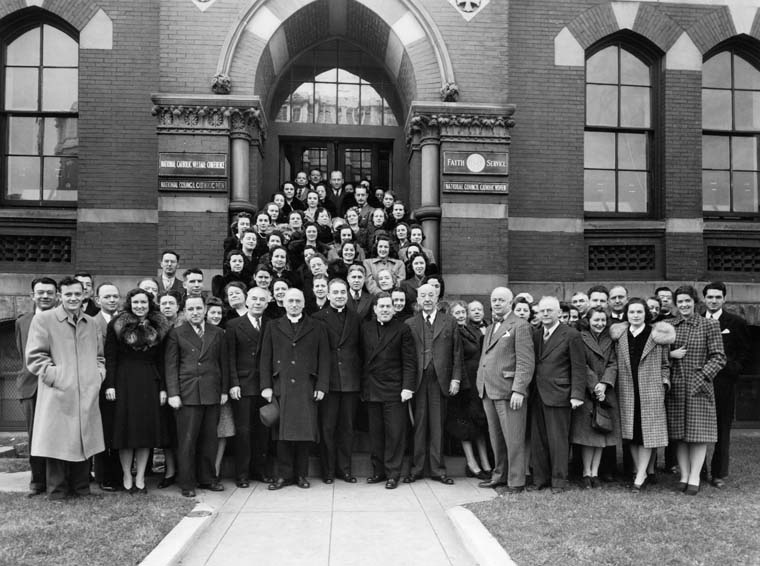 WASHINGTON (CNS) — The U.S. Conference of Catholic Bishops arose out of a national crisis a century ago, when the U.S. entered the First World War.

In responding to this historic event, the Catholic Church sought how to best serve both its own people and the larger national community at a time of great need, and today the needs of the church and the common good at large continue to guide the USCCB and those who work for it.

As national mobilization moved ahead in 1917 following U.S. entry into the war, the American bishops established the National Catholic War Council to coordinate Catholic responses to the emergency.

In the months that followed, the council’s efforts included recruiting military chaplains, promoting recreational services for servicemen, and, via a women’s committee, encouraging war-related activities focusing on displaced persons and child welfare.

“The bishops felt they wanted to make sure they were directing the Catholic effort and not just kind of watch it take place,” Bishop Earl A. Boyea of Lansing, Michigan, told Catholic News Service.

“And, the best way to do that was to get all of the bishops together to figure out how we act as a national group of bishops to help lead Catholic efforts in various areas of needs regarding our own country,” he said in an interview during the USCCB’s July convocation.

After the war, the bishops decided to continue and expand their collaboration on the national level.

In a letter to the Vatican, Cardinal James Gibbons of Baltimore, the hierarchy’s de facto leader, said the bishops sought to create “a unified force … directed to the furthering of those general policies which are vital to all.”

Pope Benedict XV approved the plan for a permanent organization to be called the National Catholic Welfare Conference, the precursor to the USCCB, whose mission remains the same a century later.

— “Acting collaboratively on vital issues confronting the church and society.”

— “Fostering communion with the church in other nations, within the church universal” under the leadership of the pope, “its supreme pastor.”

— “Offering appropriate assistance to each bishop in fulfilling his particular ministry in the local church.”

An early expression of this vision was the postwar program of social reconstruction, issued by the bishops’ Administrative Committee in February 1919.

Declaring “social justice and a contented people” to be the “only safeguard of peace,” it urged policies — now generally taken for granted but decidedly forward-looking at the time — that included minimum wage legislation; government-sponsored health and old age insurance; tough child labor laws; wage equality for women; and strict anti-monopoly enforcement.

Msgr. John A. Ryan, a professor of political economy and moral theology at The Catholic University of America, drafted the document. The priest came to head the NCWC social action department for the next quarter-century.

NCWC soon became a strong and effective voice for the U.S. church articulating Catholic views on a variety of issues.

Father Burke had spearheaded the efforts to begin an official Catholic response to World War I at the request of the Catholic bishops. He convoked the foundational meeting at The Catholic University of America in Washington that led to the creation of the bishops’ war council in 1917.

At its headquarters in Washington, the NCWC had departments for education, legislation, social action, lay organizations, and press and publicity, along with a bureau for assistance to immigrants and an international news agency serving the Catholic press. NCWC provided information and resources to help counterpart offices in dioceses in their work, and served frequently as a model for the establishment of similar conferences of bishops in other countries.

In the mid-1930s, worried about the deteriorating tone of motion pictures, the bishops launched a successful program to provide moral evaluations of films and rally Catholic public opinion through an organization called the Legion of Decency.

During World War II, they established Catholic Relief Services to provide material assistance to refugees and people in war-torn nations. Today CRS, based in Baltimore, remains a major source of relief and development aid in many parts of the world. In the Cold War years, anti-communist education and action were features of many NCWC programs.

“We really are unique and our experience brought us all of the way up to the Second Vatican Council at which point, this was recommended for all of the bishops’ groupings and national groupings to have conferences,” Bishop Boyea said. “We became in a sense almost a model for the rest of the world.”

Vatican II (1962-65) in its Decree on the Pastoral Office of Bishops commended existing bishops’ conferences, urged that conferences be established in places where they did not yet exist, and sketched their functions.

In 1966, the U.S. bishops replaced the NCWC with a dual structure: the National Conference of Catholic Bishops, for canonical, doctrinal and church life affairs; and the U.S. Catholic Conference, for temporal concerns. Programs of the old NCWC were continued and new ones were added.

The NCCB dealt with matters such as doctrine, liturgy, canon law, seminaries, priestly life and ministry, religious life, the permanent diaconate, ecumenical and interreligious affairs, pro-life activities, and others.

The USCC reflected the Catholic Church’s engagement with the world in the areas of education, social justice, and communication.

In the years immediately after Vatican II, much of the work of the NCCB and USCC focused on carrying out changes flowing from the ecumenical council or dictated by changing conditions in secular society.

After extensive study, planning and discussion, the bishops adopted a restructuring plan that combined the NCCB and USCC into the present USCCB in 2001.

Committees of bishops — which in many cases have clergy, religious and lay consultants — deal with such matters as worship, vocations, clergy and consecrated life, international justice and peace, domestic social development, evangelization and catechesis, marriage and family, youth, communications, child protection, and cultural diversity in the church.

Regarding immigration, the USCCB continues to carry out its commitment to advocacy and direct assistance through its Migration and Refugee Services.

The body of bishops, usually meeting in general assembly twice a year, sets policy for the USCCB. Oversight is provided by the Administrative Committee of bishops, and an elected president, vice president, secretary and treasurer. The National Advisory Council composed of bishops, clergy, religious and laity gives independent advice and offers recommendations.

Coordinating the work of some 300 staff members is the responsibility of the general secretariat, which also includes attached offices for legal and legislative affairs and administration. Along with its headquarters in the nation’s capital, the conference has a small office for film and broadcasting in New York and a branch office for Migration and Refugee Services in Miami.

At their general assembly in November 2016, the bishops adopted a 2017-2020 strategic plan for the USCCB with the overall theme “Encountering the Mercy of Christ and Accompanying his People With Joy.” It identifies five priorities: evangelization, family and marriage, human life and dignity, vocations and ongoing formation, and religious freedom.

Today’s USCCB mirrors the vision expressed by Cardinal Gibbons when he told the Vatican of the formation of a bishops’ committee on “General Catholic Interests and Affairs” to plan a permanent national structure for the hierarchy. There was general agreement among the bishops that the church needed such a body to present its interests and better serve the nation, the cardinal wrote.

After a century of dramatic changes, the USCCB is still responding to the multiple challenges and opportunities of that vision of collaboration in service.

Shaw is the author of more than 20 books and numerous articles and commentaries. He was information director of the NCCB/USCC (1967-1987) and the Knights of Columbus (1987-1997). Contributing to this story were Mark Pattison and Chaz Muth.