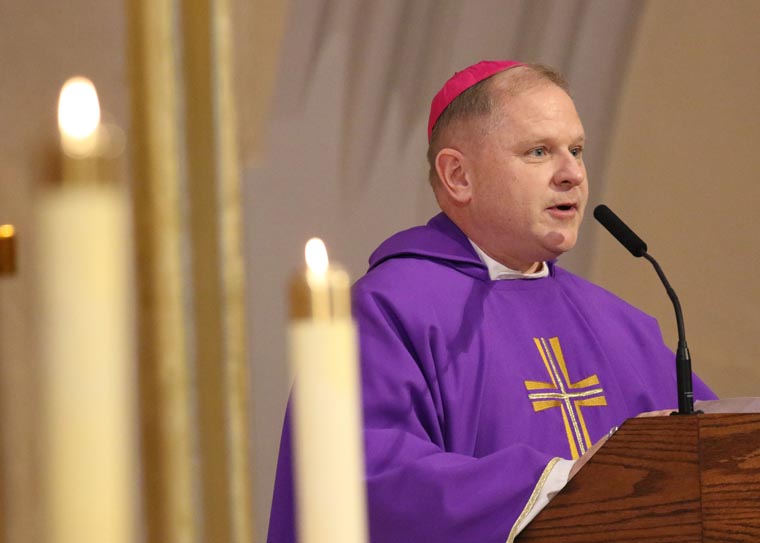 WASHINGTON (CNS) — Pope Francis has named Auxiliary Bishop Robert J. Coyle of the U.S. Archdiocese for the Military Services to be an auxiliary bishop for the Diocese of Rockville Centre, New York.

Bishop Coyle, 53, was ordained to the priesthood for the Diocese of Rockville Centre in 1991 and was an associate pastor in the diocese in the 1990s. He served 24 and a half years on active and reserve duty for the U.S. Navy. He retired from the Navy Reserve Jan. 1, 2013.

The appointment was announced in Washington Feb. 20 by Archbishop Christophe Pierre, apostolic nuncio to the United States.

“I am also truly grateful for Bishop Coyle’s pastoral service and for his leadership to the young men and women who defend our great country,” he said. “Please join me in welcoming Bishop Coyle as he begins his ministry in the spirt of dramatic missionary growth, to the presbyterate of Long Island.”

Bishop Barres said Bishop Coyle will begin his duties as an auxiliary bishop of the diocese April 2. The Rockville Centre Diocese has two other active auxiliaries — Bishops Robert J. Brennan and Andrzej Zglejszewski.

“Today I humbly accept the appointment to serve the people of God on Long Island as an auxiliary bishop in the Diocese of Rockville Centre,” Bishop Coyle said in a statement.

He thanked God for all his experiences in the 26 years since his priestly ordination, including his parish assignments, his years as a Navy chaplain and his tenure as an auxiliary bishop for the Archdiocese of the Military Services.

“I especially thank the religious, priests, teachers and parishes that formed me over my lifetime,” Bishop Coyle said. He said he was grateful to Pope Francis for the appointment and looked forward to assisting Bishop Barres.

He recalled a campaign of some years ago that used the expression “I’m a Long Islander and proud of it!”

“I again can say that here as a native son. I especially ask for the prayers of my fellow Long Islanders,” he said.

In a message to Catholics in the military, he said it was a privilege to have served them. “Thank you for your warm welcome and hospitality at the bases I have visited over the years. Your faith always inspires me. I will cherish these memories.”

He thanked Archbishop Timothy P. Broglio, head of the U.S. Archdiocese for the Military Services, for “his dedicated leadership.”

“As I begin a new chapter in my service as a bishop, I will always give thanks for the joy to have served as a Navy chaplain and auxiliary bishop with the military family,” Bishop Coyle said.

Archbishop Broglio in a statement said he was grateful for the “selfless ministry” he said Bishop Coyle has carried out since he ordained him to the episcopacy in 2013.

“At great personal sacrifice, he lived far from his parents and familiar surroundings on Long Island and tirelessly took up the pilgrim’s staff to minister to the men and women in uniform and their families,” he said.

“I know that he will offer the same generous service to Bishop John Barres and to the faithful of his native Rockville Centre,” the archbishop added. “He returns to them enriched by his ministry to a flock stationed in half of the continental United States.” Bishop Coyle was vicar for the archdiocese’s Eastern Vicariate.

He went to Jesuit run Fordham University, where he earned a bachelor of arts degree in economics in 1986. He went to Immaculate Conception Seminary in Huntington, New York, earning a master of divinity degree in 1991.

He earned a master of arts degree in theology from the seminary in 1998.

In June 1988, he was commissioned an ensign in the U.S. Navy. About three years later, on May 25, 1991, he was ordained a priest for the Rockville Centre Diocese by Bishop John R. McGann at St. Agnes Cathedral.

Father Coyle was on active duty in the Navy from 1999 to 2009. He was assigned to the 3rd Marine Division on Okinawa, Japan, from 1999 to 2000. During that time he was promoted to lieutenant commander and was deployed to Southeast Asia as landing force chaplain.

During a three-year assignment aboard the USS Harry S. Truman aircraft carrier (2000-2003), he was deployed to the Middle East from 2000 to 2001 and served in Operation Southern Watch and Operation Iraqi Freedom from 2002 to 2003.

For the next four years, he was assigned to the U.S. Merchant Marine Academy in Kings Point, New York. Father Coyle was assistant command chaplain before assuming duties as command chaplain.

In April 2005, he was promoted to the rank of U.S. Navy commander. From 2007 to 2009, he served on the USS Dwight D. Eisenhower aircraft carrier and was deployed to the Middle East in 2009 for Operation Enduring Freedom. In 2008, Pope Benedict XVI named him a monsignor.

On Feb. 11, 2013, Pope Benedict named Msgr. Coyle an auxiliary bishop of the U.S. Archdiocese for the Military Services. His episcopal ordination took place in the Basilica of the National Shrine of the Immaculate Conception in Washington April 25, 2013.