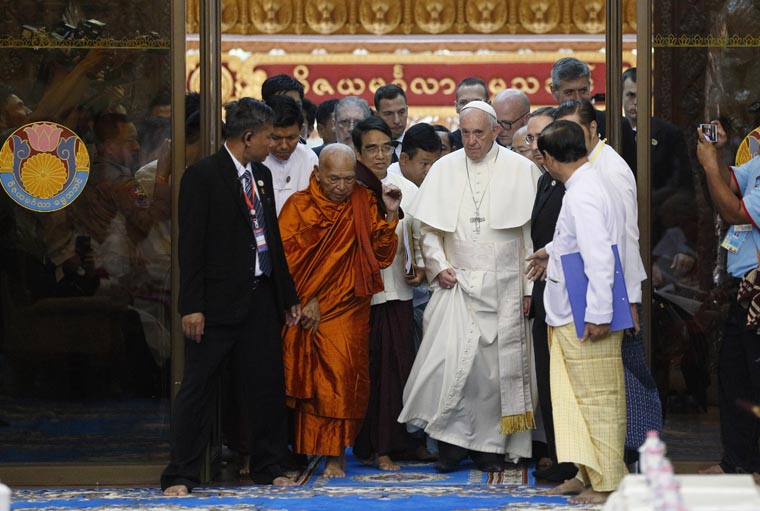 YANGON, Myanmar (CNS) — Christians and Buddhists are called by faith to overcome evil with goodness and violence with peace, Pope Francis said during a meeting with leaders of Myanmar’s Buddhist community.

Quoting St. Francis of Assisi and Buddha, the pope insisted that in a land where the powerfully bonded pairing of religion and ethnicity have been used to prolong conflict, it was time for religious leaders to reclaim the greatest values and virtues of their faith traditions.

Pope Francis met Nov. 29 with members of the State Sangha Maha Nayaka Committee, a government-appointed group of senior Buddhist monks who oversee some 500,000 monks and novices in Myanmar, where close to 90 percent of the population follows Buddhism.

One of the strongest anti-Muslim and anti-Rohingya currents of Myanmar society is led by Buddhist nationalists.
The meeting was hosted by the Buddhists at the Kaba Aye Pagoda and Center.

As is customary, Pope Francis took off his shoes before entering the hall and walked in his black socks to his place. The Buddhist committee members sat directly opposite Pope Francis and members of his entourage across a plush, bright blue rug.

The challenge of the Buddhist monks and of the Catholic clergy, the pope said, is to help their people see that patience, tolerance and respect for life are values essential to every relationship, whether with people of the same family or ethnic group or with fellow residents of a nation.

The approach, he said, is common to both faiths.

“May that wisdom continue to inspire every effort to foster patience and understanding and to heal the wounds of conflict that, through the years, have divided people of different cultures, ethnicities and religious convictions,” he said.

The pope did not use the word “Rohingya,” whom the Myanmar government does not recognize as a separate ethnic group, but he insisted the meeting was an occasion “to affirm a commitment to peace, respect for human dignity and justice for every man and woman.”

Faith, he said, not only should lead adherents to an experience of “the transcendent,” but also should help them see “their interconnectedness with all people.”

Bhaddanta Kumarabhivamsa, president of the committee, told the pope Buddhists believe all religions can, “in some way,” bring peace and prosperity, otherwise they would cease to exist.

Religious leaders, he said, “must denounce any kind of expression that incites (people) to hatred, false propaganda, conflict and war with religious pretexts and condemn strongly those who support such activity.”

Pope Francis ended his day with the Catholic bishops of Myanmar, urging them to “foster unity, charity and healing in the life of this nation.”

As he had earlier in the trip, the pope again defined as an example of “ideological colonization” the idea that differences are a threat to peaceful coexistence.

“The unity we share and celebrate is born of diversity,” he said. Unity in the church and in a nation “values people’s differences as a source of mutual enrichment and growth. It invites people to come together in a culture of encounter and solidarity.”

As Myanmar continues its transition to democratic rule and tries to deal with the challenges of development and full equality for all its ethnic groups, Pope Francis told the bishops to make sure their voices are heard, “particularly by insisting on respect for the dignity and rights of all, especially the poorest and most vulnerable.”