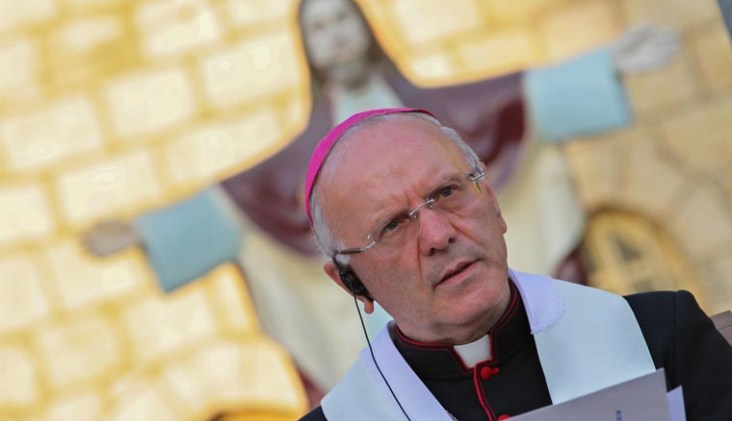 VATICAN CITY (CNS) — Pope Francis appointed Bishop Nunzio Galantino, 69, as president of the Administration of the Patrimony of the Holy See, which handles the Vatican’s investment portfolio and real estate holdings and serves as the Vatican employment office and procurement agency.

The bishop, who had been serving as secretary-general of the Italian bishops’ conference, replaces Cardinal Domenico Calcagno, who submitted his resignation when he turned 75, as required by canon law. The Vatican made the announcement June 26.
Pope Francis had told Reuters June 17 that he was going to make significant changes with the administrative office, known by its Italian acronym, APSA, starting with appointing a new president who had “an attitude of renewal.”

Cardinal “Calcagno knows the functioning well, but perhaps the mentality has to be renewed,” he told Reuters.

While reforms initiated by Pope Benedict XVI and stepped up by Pope Francis have sought to bring more accountability and transparency to the Vatican bank and Vatican offices, Pope Francis told the news agency he was still concerned “there is no transparency” in the Vatican’s real estate holdings.

“We have to move ahead with transparency, and that depends on APSA,” he said.

In other appointments announced June 26, the pope named Portuguese Father Jose Tolentino Calaca de Mendonca, vice rector of a Catholic university in Lisbon, to be head of the Vatican Secret Archives and prefect of the Vatican Library starting Sept. 1.

He will replace 74-year-old French Archbishop Jean-Louis Brugues, who had been appointed in 2012 and confirmed after Pope Francis’ election in 2013.

Father de Mendonca, 52, has degrees in theology, biblical studies and biblical theology. He has served as rector of the Pontifical Portuguese College in Rome and vice rector of the Catholic University of Portugal in Lisbon. He has been a consultor at the Pontifical Council for Culture since 2011 and has written numerous books, articles and works of poetry.

Pope Francis also signed a rescript adding four more members to the group of cardinal bishops in the College of Cardinals.

The College of Cardinals has three ranks:

— Cardinal bishops, a group that now includes 10 Latin-rite cardinals, one of whom is elected dean of the College of Cardinals. Cardinal Angelo Sodano, 90, is the current dean of the college.

— Cardinal priests, most of whom are diocesan bishops, although some senior curial officials also hold the rank.

— Cardinal deacons, most of whom are curial officials.
The new additions to the group of cardinal bishops were necessary because — before the rescript — eight of the nine members, including two of the three cardinal bishops who were patriarchs of Eastern-rite churches, had been over the age of 80 and, therefore, all of them were ineligible to enter a conclave. The exception is Cardinal Bechara Rai, Maronite patriarch, who is 78.

The role of the dean of the College of Cardinals takes on particular importance with the death of the pope. However, when the dean is over 80, it is up to the next top-ranking cardinal bishop of those under 80 who handles the dean’s duties inside the Sistine Chapel, such as administering the oath of secrecy and presiding over the conclave. When a candidate achieves a two-thirds majority vote, the dean — in the name of the entire college — asks the candidate if he accepts the election and what name he will take.

With the new additions, the next top-ranking cardinal bishop who would take on the dean’s duties during a conclave would be Cardinal Parolin.