UPDATE: Trump says houses of worship ‘essential,’ must be able to reopen 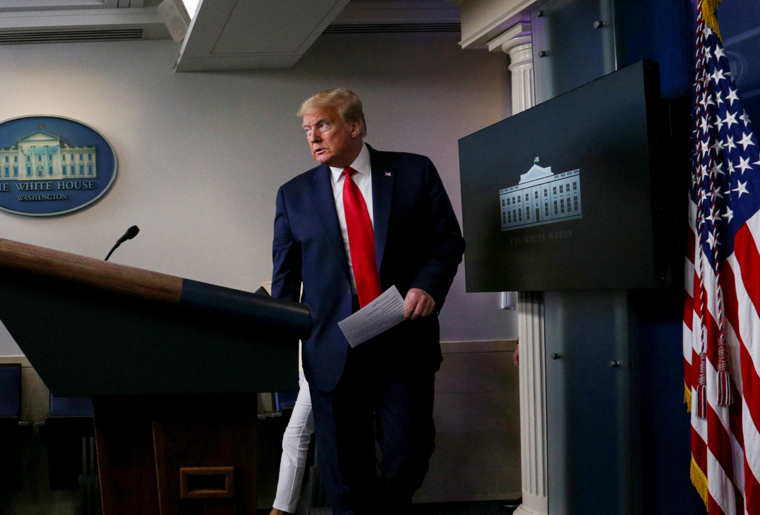 WASHINGTON (CNS) — Saying America needs “more prayer, not less,” President Donald Trump May 22 declared house of worship “essential” and directed the country’s governors “to do the right thing and allow these very important essential places of faith to open right now, this weekend.”

“The people are demanding to go to church and their synagogue, to go to their mosque. Many, many millions of Americans embrace worship as an essential part of life,” he said in a midday announcement.

“If they don’t do it, I will override the governors. America, we need more prayer, not less,” he said, though many of Trump’s critics said the U.S. president could not constitutionally “override” governors’ authority on this matter in their own states.

After Trump’s announcement, senior judicial analyst Andrew Napolitano said on Fox News Channel’s “The Daily Briefing,” the president could not override any governor, even in this case, when they issued such “ill-advised” orders to keep places of faith closed.

But he said Trump could direct the Justice Department to file lawsuits against governors because the right to worship is “absolutely protected by the First Amendment.” He added that he believed the president was “well-intended here” but “is without authority” to override governors’ executive orders.

Dr. Deborah Birx of the Coronavirus Task Force said in remarks following Trump’s declaration that some religious leaders still might want to wait and urged them to follow guidance from their local health departments to protect their congregants, especially those who have “significant comorbidities.”

“I know those houses of worship want to protect them, so really ensuring that maybe they can’t go this week if there’s a high number of COVID cases, maybe they wait another week,” she added.

In his statement, Trump noted that several governors “have deemed liquor stores and abortion clinics as essential but have left out churches and other houses of worship. It’s not right.”

Among those who praised Trump’s declaration that houses of worship are essential was the president and CEO of the Plano, Texas-based First Liberty Institute, a nonprofit law firm that handles cases on religious freedom and other First Amendment issues.

When the coronavirus was declared a pandemic, Catholic dioceses across the U.S. closed churches and suspended the public celebration of Mass, following the guidelines issued by government officials and health officials in stay-at-home orders to stop the spread of the virus.

In some parts of the country, as states have begun to open up in stages, dioceses have been issuing their own plans for the gradual reopening of churches over several phases, with the safety of congregants, priests, deacons and other parish staff foremost in the minds of Catholic officials.

They include rules for social distancing, small-number limits on gatherings, requirements for face coverings, hand-sanitizing procedures, and best practices for disinfecting pews and other areas of churches.

Across the board these church protocols have many other commonalities, including no holy water in fonts, a prohibition on physical contact during the Our Father or the sign of peace, no presentation of the gifts, reception of Communion in the hand, and for the time being the Precious Blood will not be offered at holy Communion.

Trump’s May 22 announcement comes less than a week after the U.S. Department of Justice challenged the “unequal treatment of faith communities” in California’s coronavirus reopening plan, warning that continued restrictions on worship services threaten believers’ civil rights to practice their religion.

“Simply put, there is no pandemic exception to the U.S. Constitution and its Bill of Rights,” said Assistant Attorney General Eric Dreiband in a three-page letter sent to California Gov. Gavin Newsom May 19. Dreiband is in the Justice Department’s Civil Rights Division.

And in Minnesota the state’s Catholic bishops and Lutheran officials are moving ahead with plans to resume liturgies at one-third church capacity May 26, despite the Gov. Tim Walz’s executive order capping faith-based gatherings at 10 people due to the pandemic.

Archbishop Bernard A. Hebda of St. Paul and Minneapolis said he doesn’t see the Minnesota bishops’ plan as an act of defiance of the law, but rather an assertion of the rights given to them by the law. The decision should not be interpreted as a sign of disrespect for the governor’s authority, he said.

He and leaders of the Lutheran Church Missouri Minnesota South District met with Walz to explain why they see expanding the allowance for crowd size as “an urgent need,” and remained hopeful he would change his executive order. After the meetings Walz announced May 23 he was expanding the size of groups to allow them to fill 25% of the capacity of worship spaces.

Meanwhile, restaurants, bars, malls, retail stores, salons and tattoo parlors in Minnesota have been green-lighted to reopen with certain restrictions. Restaurants, for example, are permitted to open June 1 for outdoor dining for 50 people, who must be socially distanced.